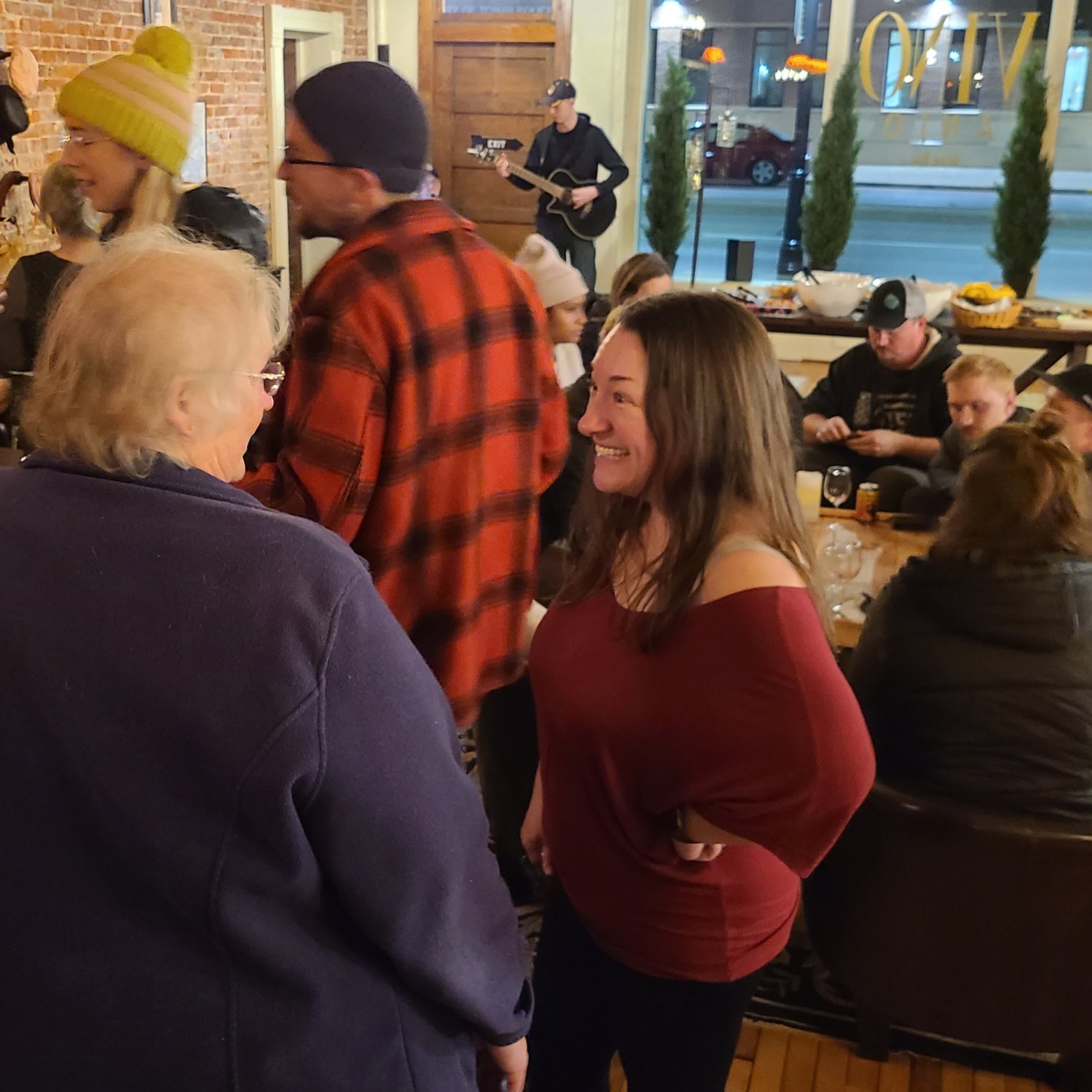 Joline Powell, center, visits with customers on the final evening that Tomah's Vino Anjo was open to the public.
Rhonda Hess 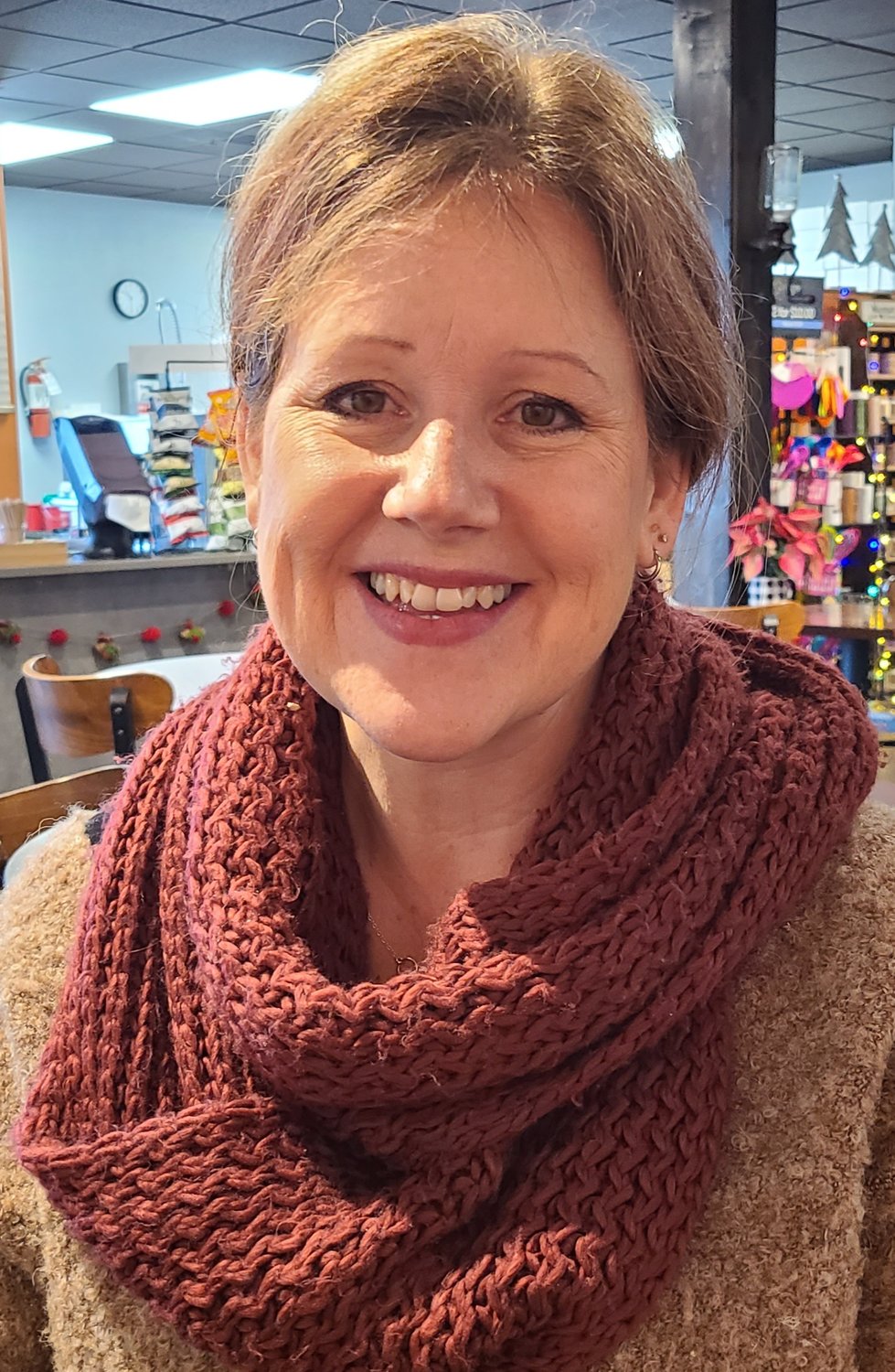 Sue Hackett and her husband, Blaine, will be opening Brick Sip Haus next year in the former Vino Anjo building.
Rhonda Hess
Previous Next
Posted Tuesday, December 13, 2022 12:00 am
By RHONDA HESS Contributing Writer

Joline Powell, owner of the now-closed Vino Anjo , located at 800 Superior Avenue, in Tomah, raised a wine glass and said goodbye to her Vino Anjo customers, a couple of weeks ago. Enter Sue Hackett and her husband, Blaine, who will be moving to Tomah, in January, and starting a new venture, of their own, in the same spot. Powell is happy that folks will once again be able to enjoy the same space, but now with a different flair and brandishing a new name: Brick Sip Haus

Sue Hackett told the story of the coincidental find. "Blaine and I have always had our end-game to live down here in Tomah and I had been looking for opportunities," Sue said. "We were at the wine bar and Blaine was performing [guitar and singing], when we found out that the wine bar was closing. We thought to ourselves, ‘Well, this is interesting.’"

With the encouragement of their daughter (who was at the wine bar with them at the time), their nephew and plenty of friends, the couple decided to check it out. "We were joking around about it and it just became reality," Sue said. She explained that the name came out of a brainstorming session with her sister, who specializes in business branding. "We came down and we looked at the space and all of the brick and the coziness and then (we were) just, kind of, wordsmithing it," she said.

Sue said that they plan on making a few changes. "We’re looking at moving the bar around, adding, potentially, a portable stage and then adding some cozy things, like curtains and different art," she said. "The theme will be wine, bourbon and beer, having a little bit more options for people."

They are hoping to draw some bourbon enthusiasts. "The bourbon is really kind of a big thing right now, so we will have some wine tasting, bourbon tasting, as well as wine and bourbon food pairings," she said. “We definitely want to be a place for people to have events."

She said those events could be weddings, showers, wine or book clubs, meetings, or even yoga or bingo. "I'm open to ideas that bring more people to the bar," she said.

Sue said she needs to wrap up her job of  28 years, in property management for a housing development company, but is hoping to have a soft opening of the business in February. Hours will be similar to those of Vino Anjos. "I think we’re going to have Thursdays, Fridays and Saturdays and most likely it’s going to be 4 p.m. to 10 p.m. and then we would have events on Wednesdays," Sue said.

The new business owner is grateful for the support of friends and family. "I want to thank my daughter - for her inspiration, my son - for his support, my sister - for all her amazing creativity and all around help, our friends: Blaine and Anna, Doreen and Jason and Tammy and Jeff, for all of their support and encouragement. Last, but not least, thanks to my husband for everything… for making this possible," she said.

As for saying goodbye to her business, which had opened in January of 2019, Powell said it is bittersweet. "I'm a little sad, a little happy and a little excited for the future; both mine and this place," she said. Powell added that she really appreciated the community, for their support over the years. To find out more, find Brick Sip Haus on Facebook.