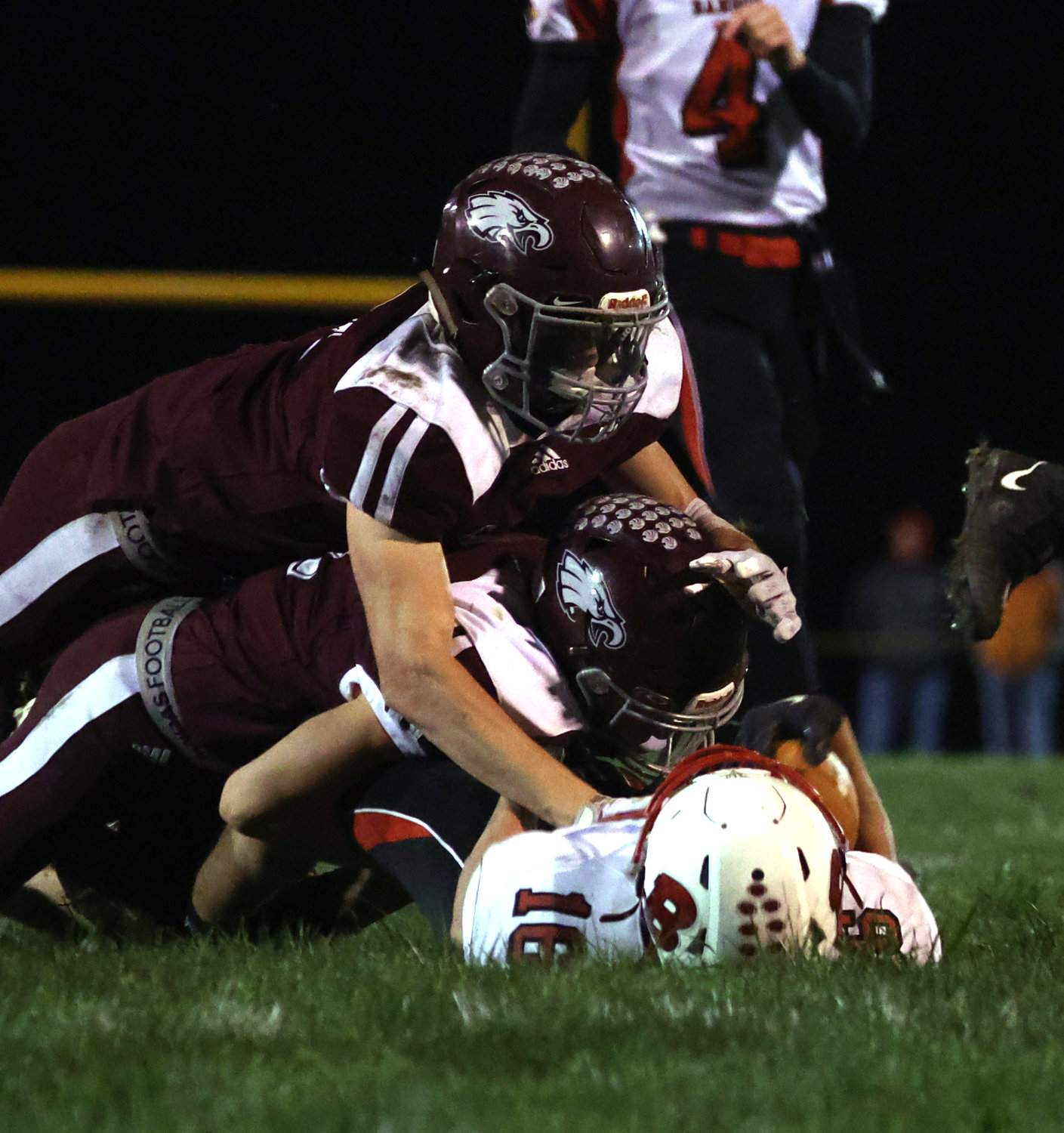 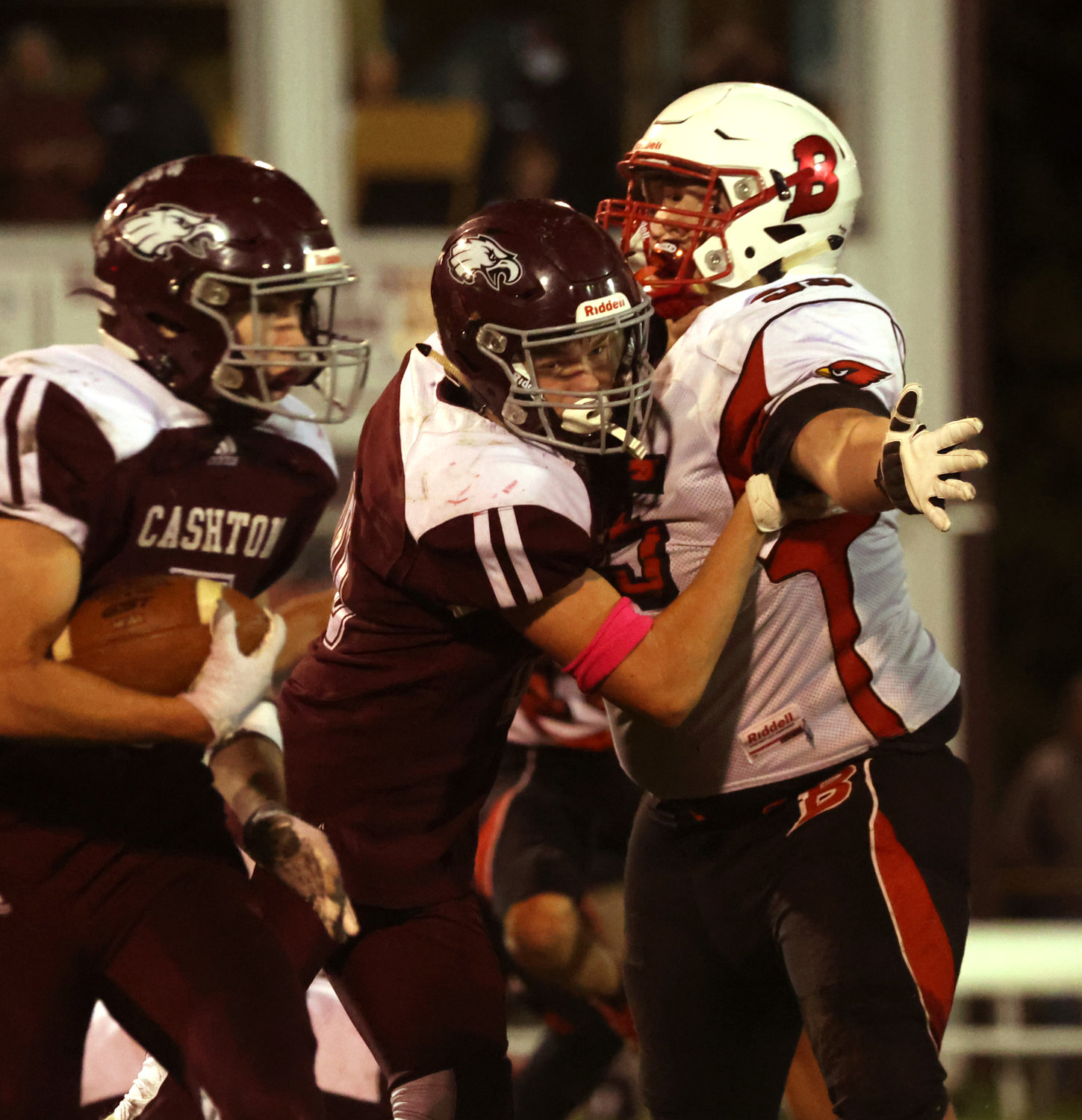 Cashton's Lincoln Klinge sets a block against Bangor's Trevor Horstman to give running back Colin O'Neil a lane to run through during the Week 9 match between the two teams.
Photo by Nate Beier/GX3 Media
Previous Next
Posted Thursday, October 28, 2021 4:30 pm
By ZACH RASTALL, Sports Writer

The Bangor Cardinals and Cashton Eagles treated fans to an instant classic entry into the rivalry’s history when the pair squared off two weeks ago.

Now, they get to do it all over again, but with conference championship implications replaced by the do-or-die nature of the postseason.

The second-seeded Eagles (8-2) are set to once again welcome in No. 3 seed Bangor (8-2) for the second time in three weeks — this time in a WIAA Division 7 Level 2 showdown between the Scenic Bluffs co-champions Friday, October 29 at 7 p.m. in Cashton.

It will be a sequel attempting to live up to the lofty standard set by the original back in Week 9, with the home team seeking a measure of revenge.

Coming into that night, Cashton had already clinched a share of the program’s first conference championship since 1998, yet were still looking for more.

A Bangor loss to Onalaska Luther in Week 7 left the Cardinals one game back in the standings and opened the door for the Eagles to ensure themselves a share of the Scenic Bluffs crown before Week 9 even came around.

Cashton succeeded in that endeavor, but still had plenty to play for in the regular season’s final week. If the Eagles knocked off Bangor, they’d earn the outright conference title, their first win over their archrivals since 2013 and would deny the Cardinals a share of their eighth consecutive Scenic Bluffs championship.

The highly anticipated matchup lived up to the hype, rewarding a capacity crowd that created an electric atmosphere with an entertaining back-and-forth battle that was decided in the final minutes.

An inadvertent whistle by one of the refs added a dose of controversy late in the proceedings, giving Bangor a second chance at a fourth-down conversion. The Cardinals took advantage and got the first down, allowing them to bleed out the rest of the clock and secure a 17-13 victory.

The officiating mistake was understandably a source of frustration for the Eagles, though Cashton head coach Jered Hemmersbach was more focused on the mistakes his team made that were within their control. He stressed the importance of limiting those miscues if they are going to flip the result in Friday’s rematch.

“All negative plays — if that’s a penalty, if that’s a tackle for a loss or a turnover — those are magnified against a team of that caliber,” Hemmersbach said. “Against the really, really good teams, you just have to try to minimize as many negative plays as possible, because you never know if that’s the drive that would’ve scored a touchdown.”

Following the heartbreaking defeat, Cashton was able to put it in the past and put all its attention on the team’s playoff opener. The Eagles trounced No. 7 seed De Soto 46-0 in their Level 1 matchup, snapping the program’s seven-game postseason losing streak and notching their first playoff win since 1999.

“It’s funny because I don’t know if the kids always know or realize how long it’s been,” Hemmersbach said of ending the playoff win drought. “I think parents and fans probably take it more in than the kids do. It was so long, but for this group of kids, it’s really their time.”

Hemmersbach noted that for his players, the past is the past and they are more concerned with forging their own identity for what Cashton football is and can be. A Level 2 victory would certainly add to that, regardless of the opponent. But getting that elusive win over their archrivals — one of the best, most consistent programs in the state — in the playoffs would be a massive statement.

“I look forward to the challenge of it. I look forward to being in that type of game — the environment, the playoffs, the ‘loser goes home’ type of thing,” Hemmersbach said. “Eventually, that’s what we want to do as a program is take that next step. I think all of us are eager to be able to be in that type of setting and game to make that next step with where we want to go within our own program.”