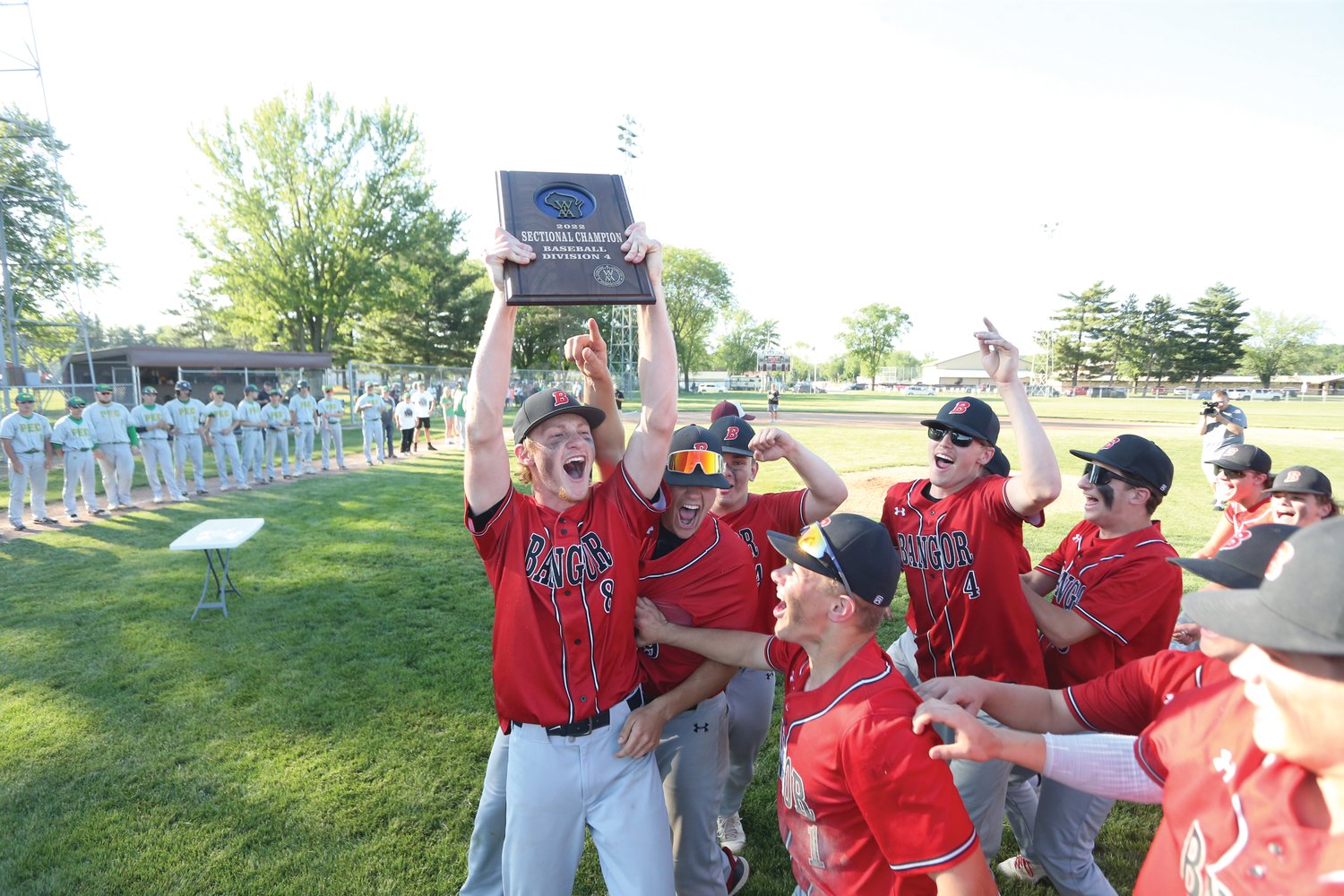 MUSCODA — The Bangor Cardinals have been knocking at the door of the state baseball tournament for a while now. Thanks to an unconventional pitching strategy, excellence on the mound and a timely offensive explosion, that door has finally been forcefully broken down.

No. 2 seed Bangor (21-5) finally achieved a state breakthrough, taking down No. 1 seed Pecatonica (20-3) 9-3 in a WIAA Division 4 sectional final matchup Tuesday, June 7 in Muscoda. The Vikings had beaten host and No. 3 seed Riverdale (16-13) 7-3 in the sectional semifinals earlier in the day.

The win over Pecatonica brings an end to a 26-year state tournament drought for the Bangor baseball program — their path back to state littered with postseason heartbreaks and close calls.

The team decided to utilize a different approach at sectionals this time by having No. 2 pitcher Chase Horstman take the mound to start the sectional semifinals in the hopes of having No. 1 pitcher Ashton Michek available to pitch most of the sectional finals.

The gambit worked. Horstman got the job done in a 3-1 sectional semifinal win over No. 1 seed Ithaca (19-4), with Michek only coming in for the final two innings and keeping his pitch count under 20.

That meant Michek — the three-time Scenic Bluffs Pitcher of the Year who has been lights out all spring long — would get the chance to lead the way on the mound in the biggest start of his decorated career.

"I'm not going to lie, I was ready. I don't want to say I didn't have any nerves, but they were small," Michek said. "We've been in this spot before — us seniors have been here three times — and we were just ready to take on the challenge and get it done."

Having Michek pitching left the Cardinals confident that Pecatonica wouldn't rack up too many runs, but the bigger question was whether the offense could produce on this stage. Bangor had scored just one run in a 2019 sectional final loss to Belmont and two runs when they fell to Southwestern in last year's sectional finals.

Even after the sectional semifinal win over Ithaca, Bangor head coach Todd Grant noted the importance of scoring more than the three runs they had put up en route to beating the Bulldogs. His team would answer that call against Pecatonica.

The top of the first saw Michek drive in Samuel Cropp with an RBI single (Michek was thrown out trying to stretch it into a double) to open the scoring. After the Vikings tied it at 1-1 with a squeeze bunt in the bottom of the first, the Cardinals took a 3-1 lead in the top of the second thanks to a Dawson Daines RBI single and a Bryce Peterson sacrifice fly.

Eli Tucker added an RBI single in the top of the third to stretch the advantage to 4-1. In the bottom half of that same inning, the Vikings made their move.

Three straight hits with two outs — capped off by a Jameson Johnson two-run double — allowed Pecatonica to slice the deficit to 4-3. Michek did strand the tying run at second, but the pressure had suddenly ratcheted up on Bangor.

Instead of tightening up, the Cardinals responded by putting together a five-run rally in the top of the fourth.

Daines and Peterson both scored from second and third, respectively, on an Evan Wolfe grounder that led to a throw home that got away from the catcher. Cropp drove in Wolfe on an RBI single and later scored himself on a wild pitch. Horstman got caught in a rundown between first and second, beat the tag into second and allowed Michek to score from third in the chaos.

Just like that, it was 9-3 Bangor. Pecatonica wouldn't get another runner into scoring position the rest of the way as the Cardinals went on to punch their ticket to state.

Michek got the win on the mound by going 5 2/3 innings, giving up three runs on six hits, one walk and striking out nine. Once Michek hit his 100-pitch limit for the day, Horstman came in and struck out two while pitching 1 1/3 perfect innings in relief.

"We all did our job in this last game, put up some big runs. Pecatonica did a great job. They're a great team. I don't think I've ever been hit like that my entire career," Michek said. "It's just crazy. We fought hard, they fought hard — it was a great game. It's what you want a sectional final to be. It was just amazing."

Once Wolfe called off Daines on a flyout to secure the final out of the game, the celebration was on. Players dogpiled at the pitcher's mound. Grant was doused with ice water. Friends and family members took to the field to share in the jubilation after the presentation of the sectional plaque.

It was a moment well worth celebrating that won't soon be forgotten. Yet now the challenge becomes coming down off that emotional high and getting ready for the state tournament next week up in the Fox Cities, where they'll be joined by Columbus Catholic, Oakfield and Eau Claire Regis in the Division 4 field.

"My message will be that it was an awesome moment. Wonderful," Grant said. "Enjoy it, but now let's set it aside for a little bit and move on to the next one."

The two semifinal winners will advance to square off in the Division 4 state championship game Thursday, June 16 at 9 a.m.