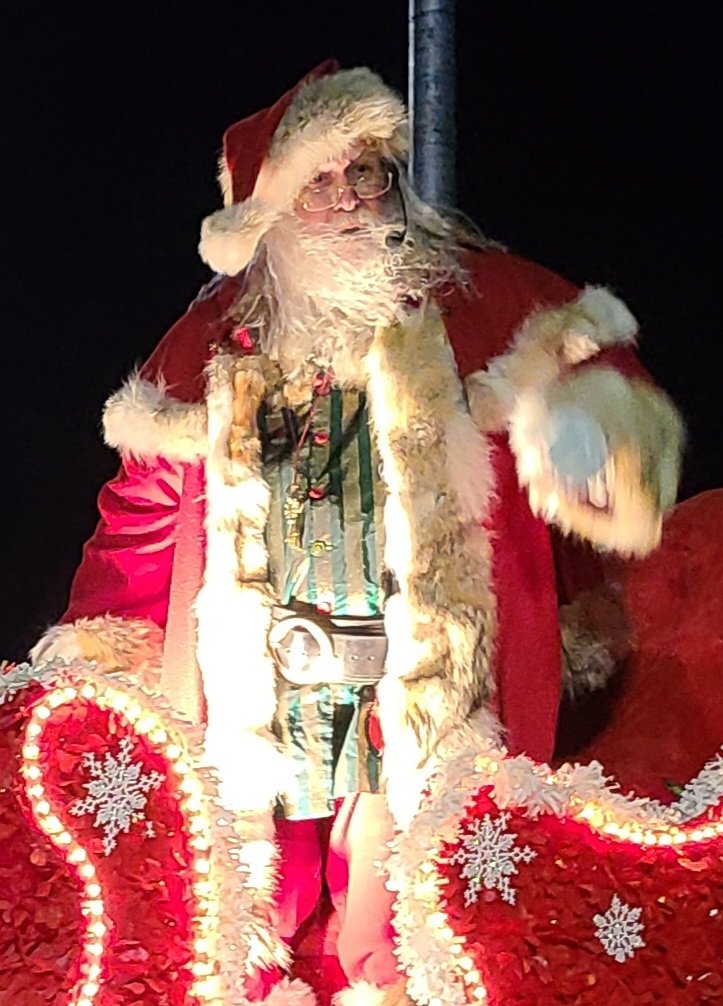 Santa Claus was met with applause, as he closed out the Tomah Holiday Parade on the Tomah Chamber of Commerce float. Magic floated through the minds and hearts of youngsters, as the parade’s exclamation point of Santa rolled by.
Rhonda Hess 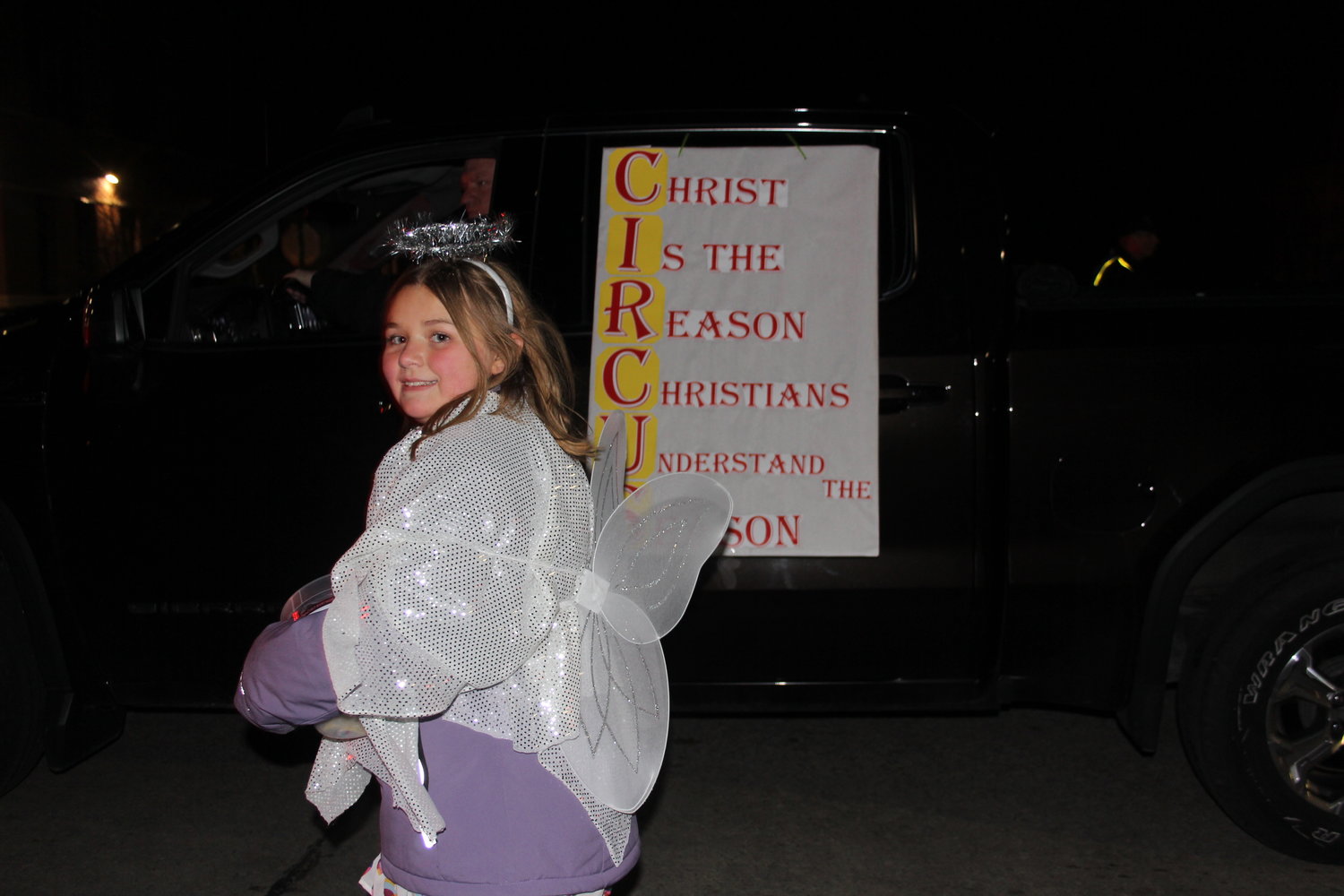 This little angel marched as part of the Queen of the Apostles School parade entry.
Rhonda Hess 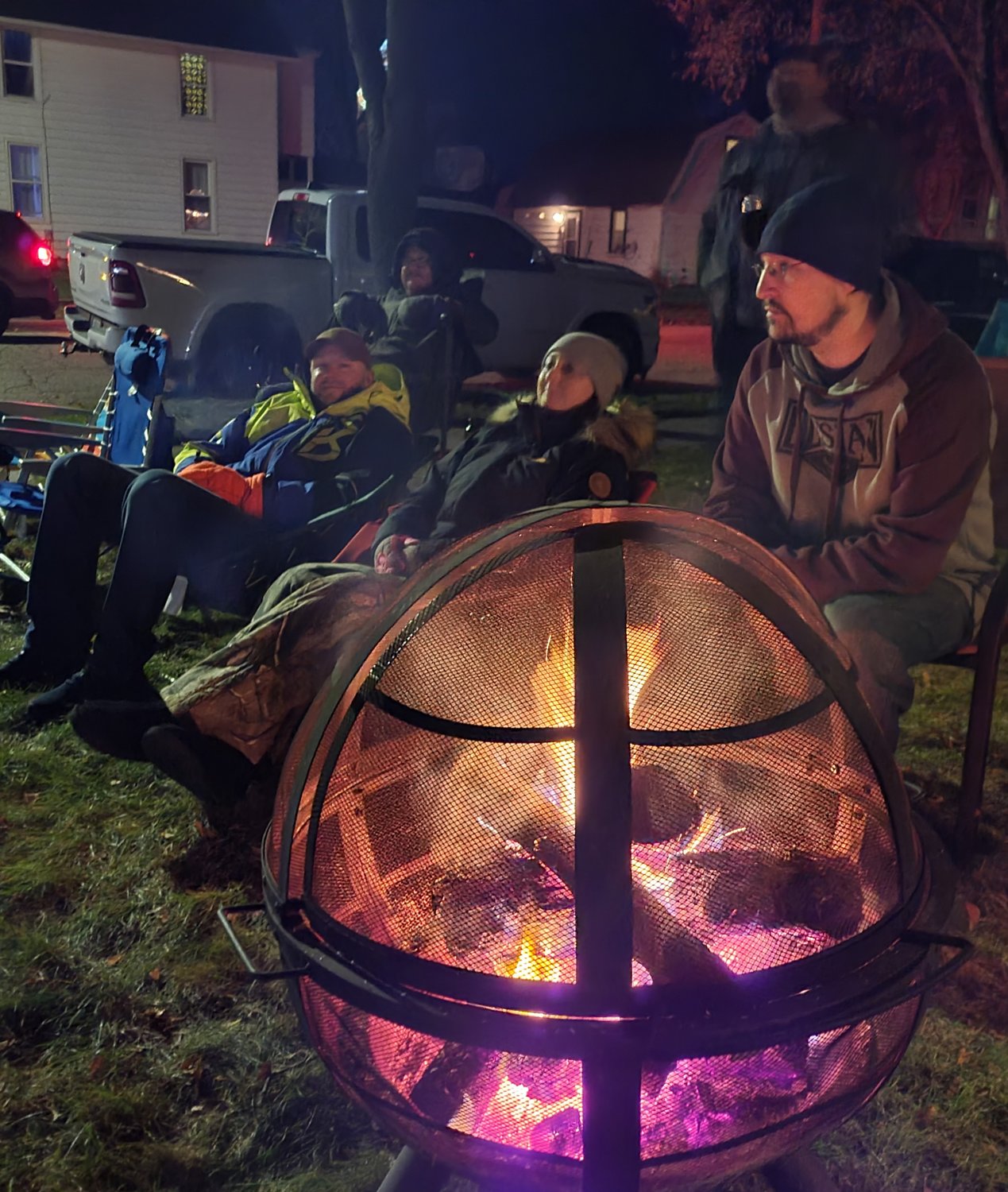 Friends hang out by the fire at Brian Pierce's house, waiting for the parade.
Rhonda Hess 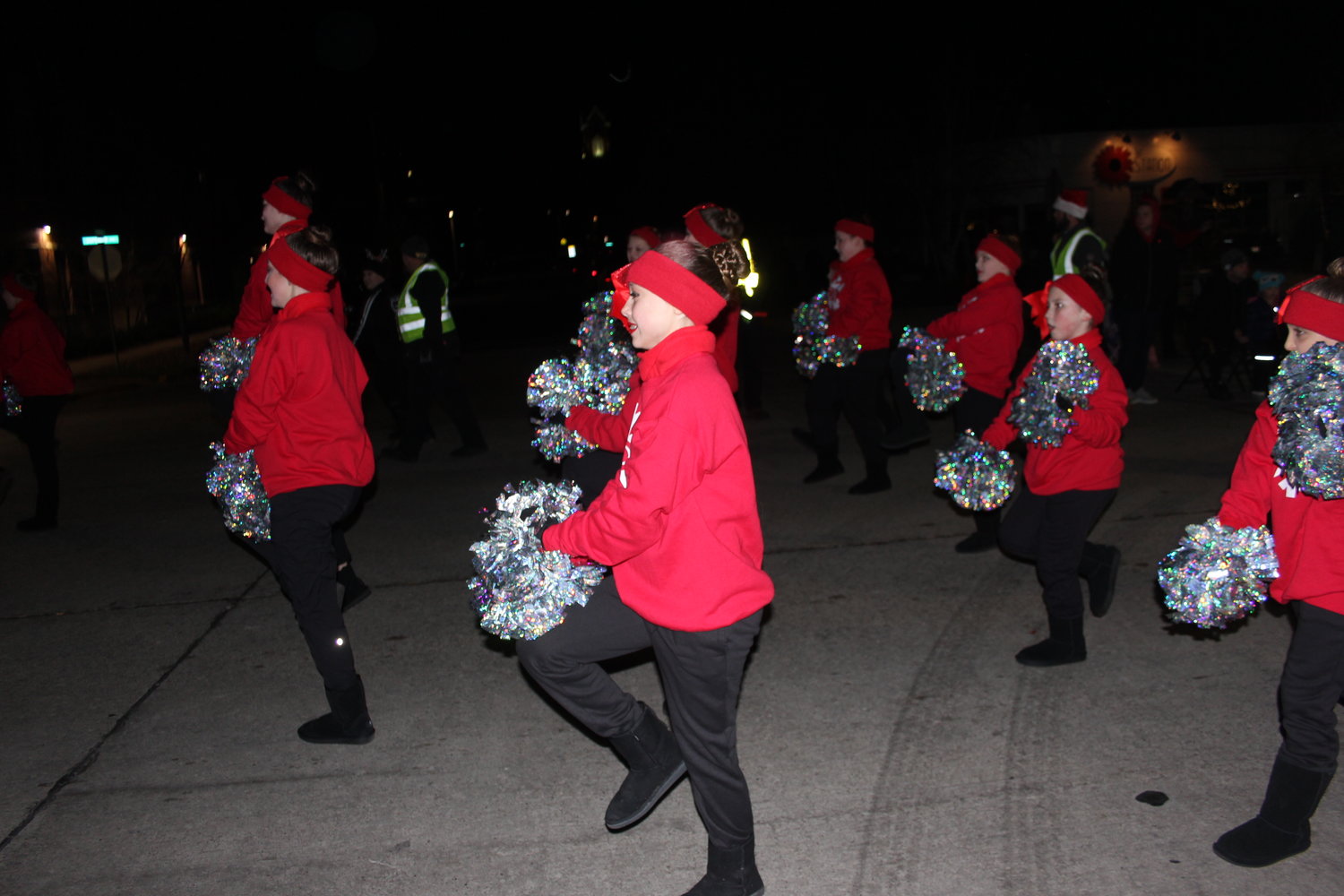 This clown reminded everyone to see the Tomah ACT play starting this week.
Rhonda Hess 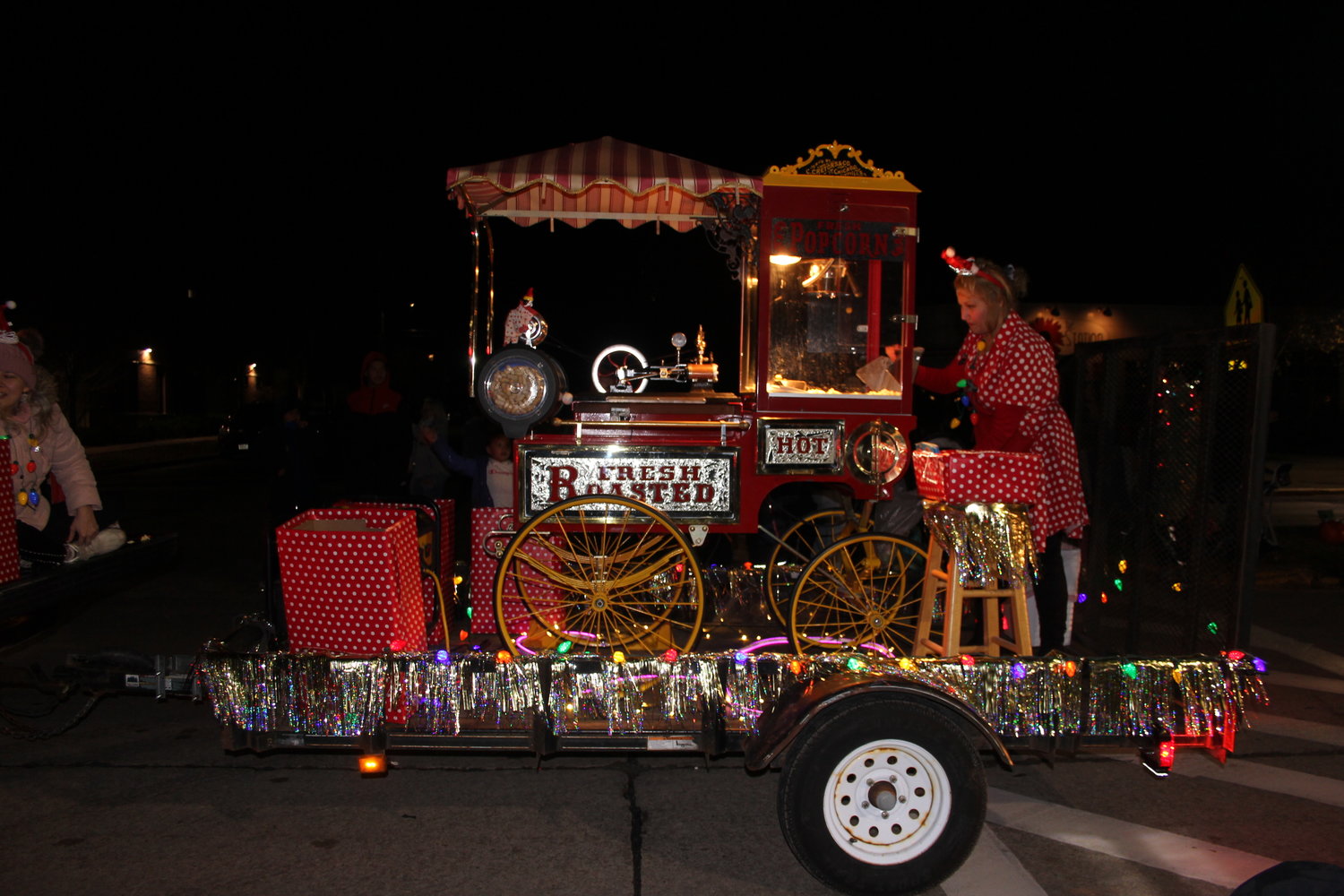 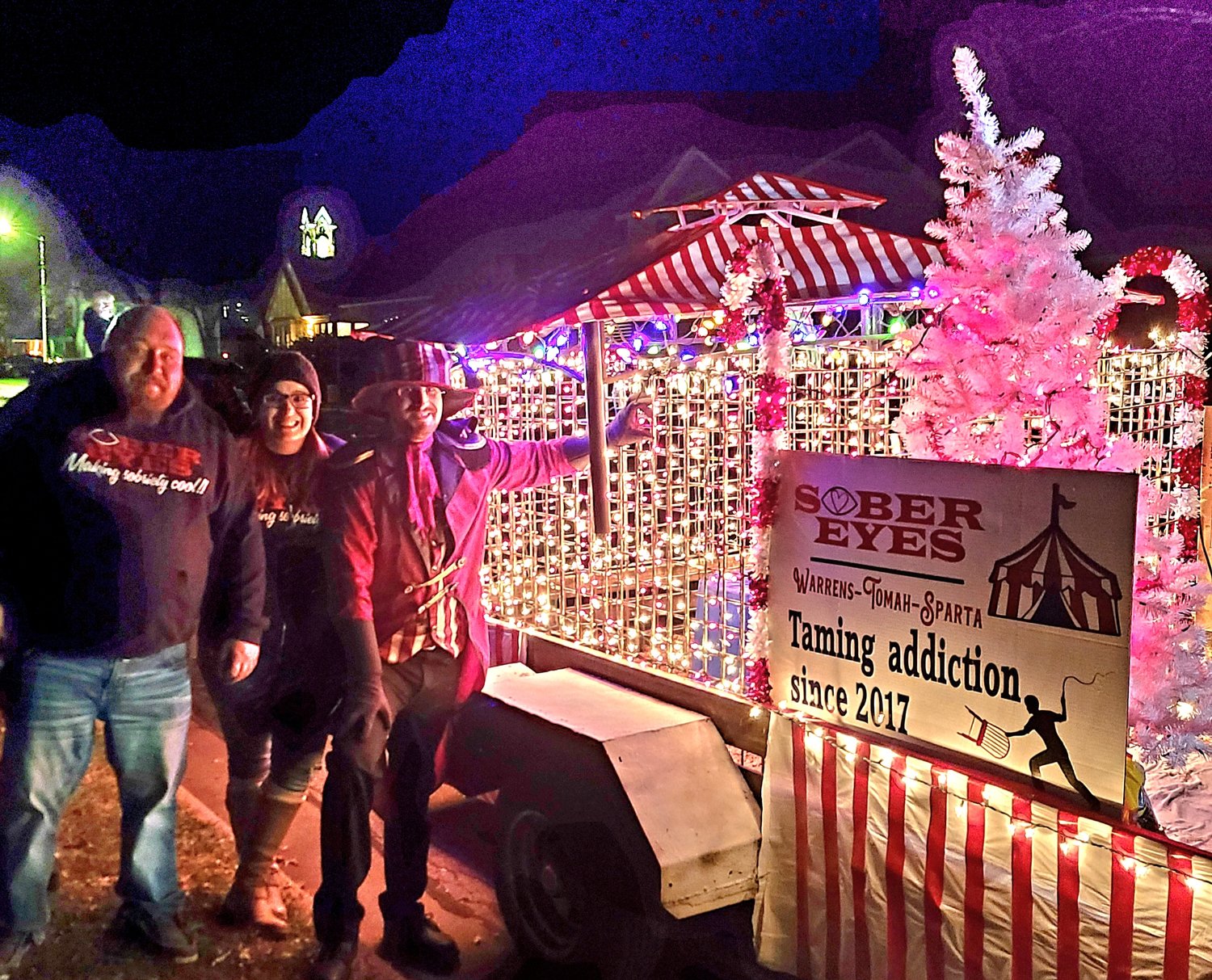 Tomah residents and visitors showed up early on November 25th, creating an energy that served as the entry point for the Holiday Parade, on Superior Avenue, which had an official start time of 7 p.m.. Put on by the Tomah Chamber of Commerce, over 45 parade units, with the theme, "Life's a Circus, Enjoy the Show," set up on McLean Avenue, near the start point of the event, which was West Foster Street. The Parade participants then traveled south, down the "northbound" lanes of Superior Avenue, toward the finish line, at West Holton Street. The celebrated-seasonal procession passed the post-Thanksgiving attendees, bringing them all colorful candy for their eyes, as well as sugary treats for the kiddos.

Tomah Chamber's Tina Thompson was busy helping to organize the floats. "This is the kickoff for the holiday season in Tomah," she said, adding that she was looking forward to seeing all of the parade entries. "Some of the participants go all out," she said.

One group of parade-goers was enjoying a fire outside Brian Pierce's house, which sits along the parade route. "This is the tenth year of doing this," Pierce said. "We build a fire and I make mulled wine and put up an awning, if it's rainy.” Friends and family of Pierce had come from Madison, Reedsburg and even Florida, for the parade. "They travel far and wide, to come to the Tomah Holiday Parade," Pierce said. "It's a nice community event."

Another group getting a jump on the parade festivities was the Queen of the Apostle school, which lined up near their building. "We worked on (the float) all day Wednesday," Megan Van Hayden, 3K preschool teacher said. "This is our first year. It's outreach for the community."

Members of the Oakdale Area Snowmobile Association had a well-lit float, with a snowmobile being ridden by a wild-stuffed animal. in the middle of all of the lights. Jason Guthrie, one of the members, said they enjoy doing the parade and getting out into the community. "We're one of 10 snowmobile clubs in the county," he said. "We take care of the trails."

A couple of members of the Guardians of the Children, a Castle Rock motorcycle club, Mouse and Fancy, were also setting up early Friday night. "We try to do it every year," Mouse said of the parade, adding "you'll hear us coming."

Sober Eyes of Warrens, Tomah and Sparta, have been doing the parade for four years and this year their float featured a homemade circus tent. Devon Brenson, president of the non-profit group said it took three days to make.

"We used a grill topper, spray painted it white, and used duct tape for the circus top," he said. The organization holds recovery groups in Warrens, Tomah and Sparta. Before the parade, they were expecting anywhere from 10 to 20 meeting attendees, who are dealing with addiction, to walk with them. "This is all volunteer," Brenson said. "And we operate on all donations. It's pretty cool to see so much work being done."

Tina Thompson said that the Tomah Chamber of Commerce recognizes parade winners in three categories: best youth entry, best organization and best business. Winners will be announced on their Facebook page this week.