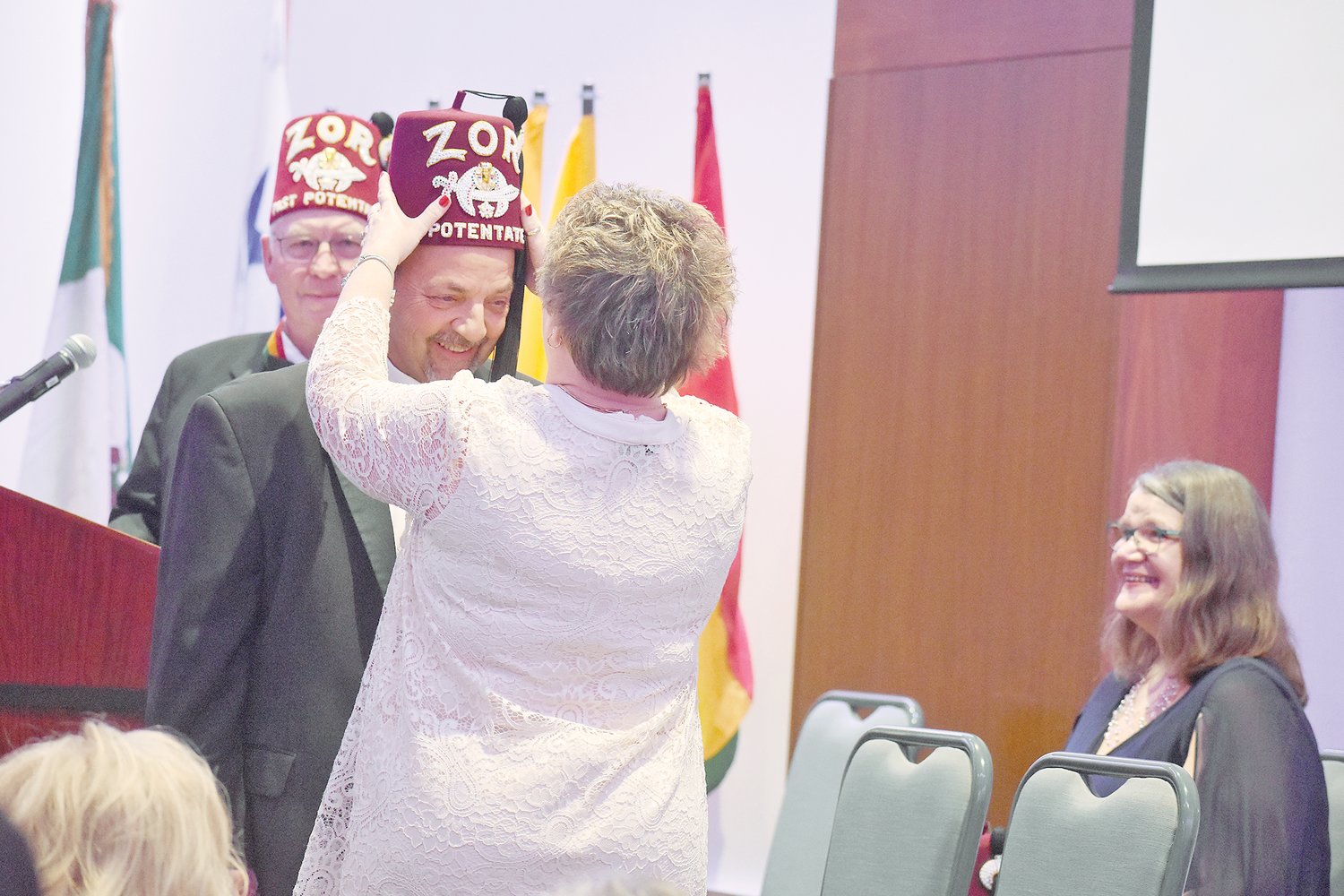 Al Brueggen receives the acknowledgement of his elected position, as Zor Shriner Potentate, at a ceremony in La Crosse, on January 14th. He is seen here, during the ceremony, with his wife, Penny, putting his Fez on. All 14 positions, elected or appointed, went through the same motions. Applause and tears always followed.
Benny Mailman 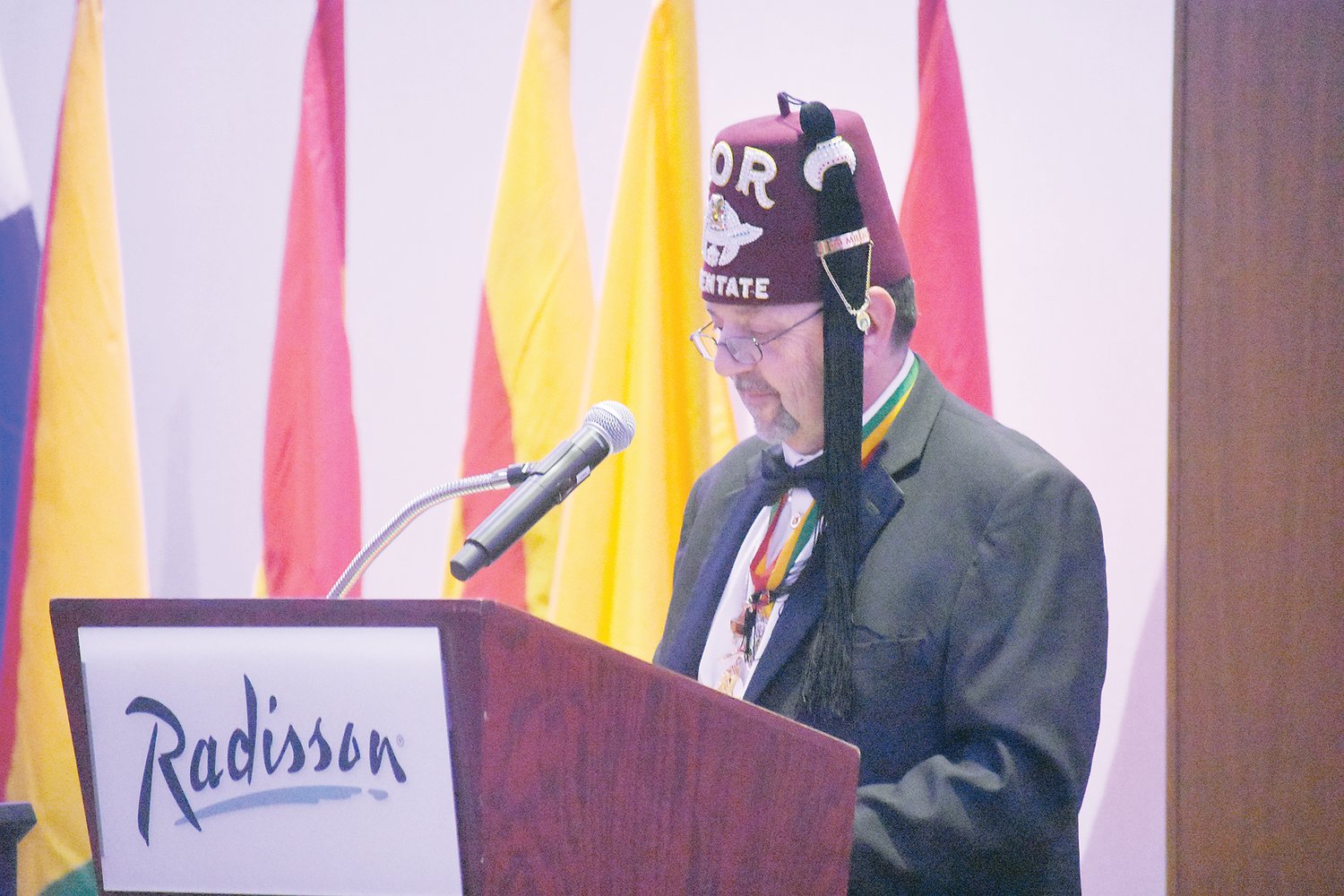 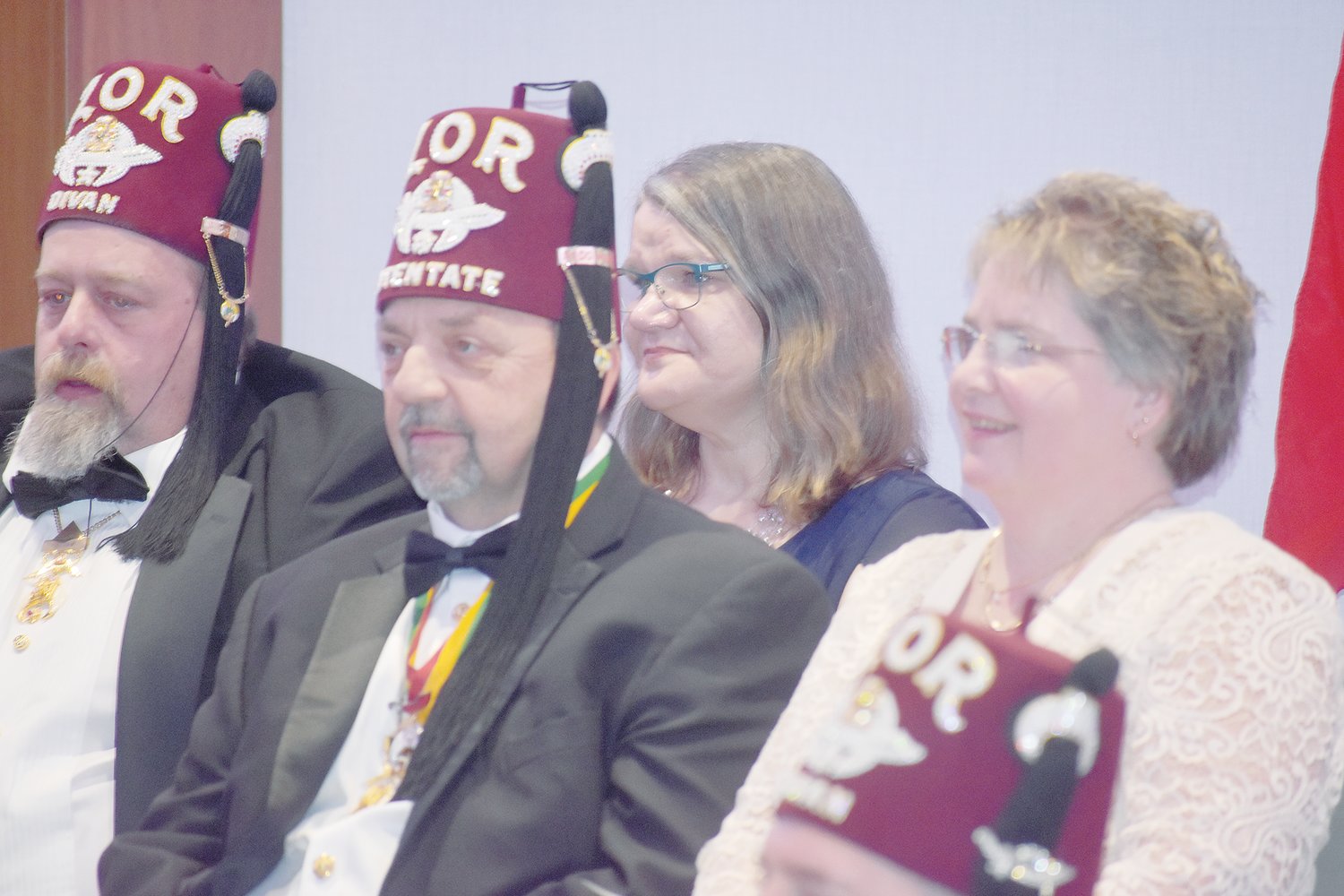 Al and Penny Brueggen sit patiently, after Al was officially the Potentate, Soon, Al would take to the podium and continue moving forward in his role, as For Shriner Potentate.
Benny Mailman
Previous Next
Posted Thursday, January 19, 2023 12:00 am
By BENNY MAILMAN Editor

On Saturday, January 14th, a group of Shriners from around Wisconsin had gathered at the Radisson Hotel, in La Crosse, to formally put their 2023 elected and appointed officials into their new rolls, through ceremony. The highest appointment was that of Al Brueggen, a Sparta native. Al and his wife, Penny, own the Foxhole Pub, out at 1215, Angelo Road. Brueggen was appointed as Potentate of the Zor Shriner Temple.

The Temples and Mission

In Wisconsin, there are three Shriner Temples: Milwaukee, Green Bay and Madison, with the Madison Temple covering the greatest area. The Madison zone covers from Janesville up to Wausau, up to Lake Superior, over to the state line and then all the way down. The total number of members for the Madison Temple is 1,000.

For Brueggen, his position as Potentate means that he will undertake the planning of this year’ events, for the Shriners. Each year, the new Potentate comes in with their own mission statement, as to what they will strive to accomplish during their term. “I have already expressed my feelings of membership and mentoring,” Brueggen stated. “If you bring a guy in, you better stick with him and keep him interested. For me, it is crucial to have members be active. We want members who enjoy what we do with the community: the parades, cars, clowns… all of it.”

When the Herald showed up, Shrine members shouted, “Al has got his own media! What the heck!” The Shriners were joking and jawing with each other, even throughout the ceremony, indicating that a true brotherhood exists with them. Other guests of Al Brueggen that showed up for this momentous occasion, were nearly a dozen law enforcement friends of Brueggens. Seated in the backrow, they all stood up, being recognized by the Shriners with a round of applause. Brueggen laughed, as he said, “They closed-down the hospitality room on Saturday night; they were the last ones to leave and probably had the most fun. It was an honor to have them show up.”

In the United States, there are several regional Shrine associations, such as the Pacific, Southern and Central States associations. Wisconsin is part of the Midwest Shrine Association, along with one temple from Michigan, two from Canada, Iowa and the Dakotas. “We get together once a year and have a huge event, where we have competitions between the motorized units [midget cars] and the clowns,” explained Potentate Brueggen. “In 2024 this awesome event is going to be held in La Crosse. It will be August 7th through the 10th, with Thursday evenings parade being in Onalaska and Saturday mornings parade being in La Crescent. The entire event will be open to the public.”

Potentate Brueggen also stated the push for Shriner clubs and units to regain their health and strength again. “There has been a big push, over the past 5 to 6 years, for clubs and units to regain their health,” Brueggen stated. “They have been falling apart from donating everything they get to the Shriner’s Childrens Hospital and not saving anything to ensure the longevity of the clubs and units.” Brueggen went on to say how Sparta has gotten brand-new cars for parades. “We have 65 members at the Masonic Lodge. Of that, I would say about 45 are Shriners, and of that, 15 drive the midget cars. With the cars being brand new, there are no worries of being a road hazard when we go out into the community.”

Back to Saturday’s Event, Connection

“There was a lot of nervousness leading up to the event,” Brueggen said. “My wife Penny and I had actually been getting ready for the event for the past two years, as we knew the eventuality of holding the position.”

The entertainment that Al had secured for the evening is a story, in and of itself. “Larry and Penny Krauss, along with my wife Penny and I, headed out to Deadwood, through a blizzard, a couple years ago, with really, no plans,” Brueggen told the Herald. “While we were at a diner, we saw a guy walk to his car, with his orange juice. The waitress shook her head, because she knew he was going to add vodka to it. Then the waitress told us he was the performer at a casino and that we should go see him. We went, and he was hilarious. In talking with him later, we found out that his daughter had actually been taken care of at a Shriner’s Hospital. ‘I will do anything for the Shriners,’ the comedien, Kip Attaway, stated. So I told Kip that I would need him in 2 years, and sure enough, he came.”

Toward the end of the Herald interview with Al, two fellow Shriners walked in: Steve Livernash (Wisconsin Rapids), Divan (board of directors) and Chris Peters (Stevens Point), Media and IT. Steve will become Potentate in 2026. When pressed on what they felt strongest about, in reference to the Shriners, Steve said, “I’m heavy on inspiration. Everything we do is an inspiration, by helping kids. We are inspired to have fun in parades; to bring our passion and inspiration to others,” Livernash said. “I still remember the day I got hooked. I was at one of my first events and a little girl grabbed my hand and said, ‘Thank you Shriner, for helping my brother.’ It was at that moment that I felt the honor of wearing the Shriner Fez on my head; that I was the continuation of the strong current that had been created by so many Shriners before me.”

Chris Peters was actually a patient at the Shriner’s Hospital, as a child. “When I was born, all of my fingers and toes were all fused together, except for my little toe. Shriners did a good enough job, where I got to spend 20 years serving my country in the Navy, as an Aviation Electronics Technician,” Peters stated. “I originally got into the Shriners, to give back to them. Then these guys got me to go along with them on the Funster Bus, which is a clown unit. They dressed me up as a clown, and I was a bit out of my comfort zone. Then we went out in the parade, I was high-fiving the kids, thinking it was just about fun, when a parent stood up, reached past their kids and shook my hand, and said, ‘Thank you so much for what you do.’ Then it happened: all parents stood up as we passed and applause rang out. I get goosebumps thinking about that moment. That was when I was officially hooked.”

The interview ended with Steve Livernash telling a story about the Silent Messenger, a symbol associated with the Shriners. The symbol is the back of a man, carrying a young girl in one arm and her crutches in the other. The man is wearing a Fez and the Shriner symbol is on the shirt he is wearing. “I was putting a 10-foot decal of the Silent Messenger on a semi-trailer. All-of-a-sudden, 11 guys showed up to help me, literally from nowhere. I was not a Shriner at the time and was wondering why these guys were there. When I got down to the last little bit of the reveal, there was not a dry eye amongst the lot of them and they all applauded. The tears were not glassy eyes of sadness, nor tears of joy, but rather, they were tears of pride and compassion… for humanity. What I did not know at the time was that they were all Shriners who drove the kids to the hospitals… they were the silent messengers; I had no idea. Seeing grown men cry, well, that’s inspiration. It is all about inspiration.”

A New Company Roaming the Streets of Sparta