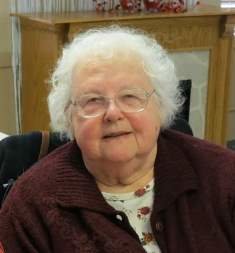 In the early years, her family moved all over the country, before settling in Pennsylvania. Pat met her husband Bob of 65 years, at art school in Williamsport, Pennsylvania. They married on her 18th birthday and moved to Boston, Massachusetts. Leaving the east coast and extended family behind, they moved to Sparta with two young daughters and a mama cat with a new litter of kittens. Bob preceded her in death on July 6, 2013.

Pat was very active in Garden Club and a charter member of Tilling Thyme. She was good at many things including: cooking, knitting, sewing, and costume making. Pat loved to sing and would dance around Bob in the kitchen. The two of them created Swartz Allied Art Service, SAAS, and entered art shows, painted signs, trucks, billboards and the sides of school buses. Above all she was an artist from still life to portraits, from to colorful abstract landscapes to lithographs, from sculptures to paper mache, from flowers to cows. Her favorite medium was watercolor.

Pat was a founding member of the Pump House in La Crosse and a longtime member of WWRA, Western Wisconsin Regional Arts. She went to UW La Crosse in the late 70’s early 80’s to expand her artistic skills.

Pat is survived by her four children, Karen (Tim) McClain, of Sparta; Gretchen (Ted) Howard, of Nelson, New Zealand; Gene Swartz and Peter Swartz, both of Sparta; her three grandchildren, Tegan (Chris) Wise, of Sparta; Nyssa McClain of Milwaukee; and Devin (Becky Kerby) McClain, of La Crosse. She is further survived by three great-grandchildren, Grace Wise and Ethan Wise, both of Sparta and Reese McClain of French Island; a sister, Judy (Bob) Muir, of Lake Orion, Michigan; and a step-brother, Russell (Pat) Mosher, of Vernon, Connecticut.

The family is finally able to gather to celebrate Pat’s life. There will be a visitation and art show with refreshments served from 1 p.m. until 3 p.m. at Lanham-Schanhofer Funeral Home and Cremation, Sparta. Online condolences may be offered to Pat’s family at www.schanhoferfh.com

The Lanham-Schanhofer Funeral Home, Sparta, is assisting the family with arrangements.