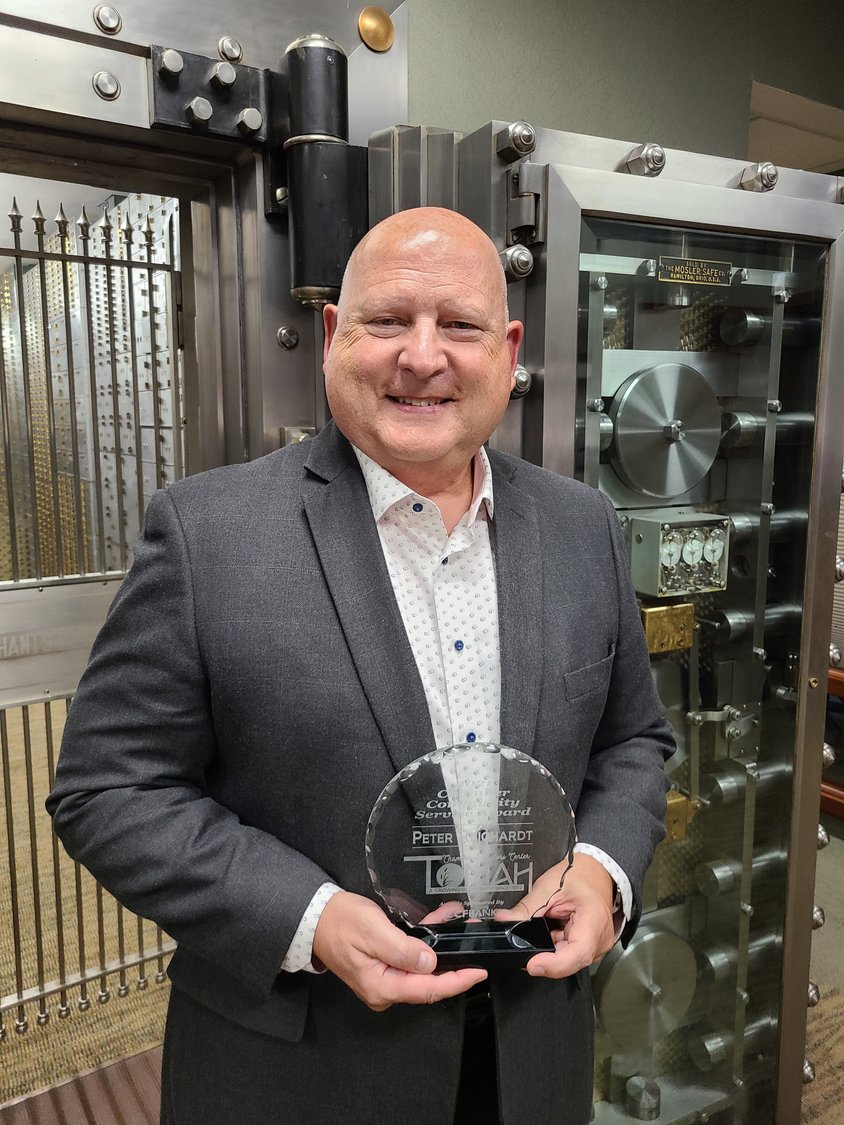 Pete Reichardt may be retiring from his job, as Senior Vice-President and Regional President of CCF Bank later this month, but he has no intention of slowing down. The term "servant leadership" was coined in "The Servant as Leader," an essay by Robert Greenleaf, published in 1970. In it, Greenleaf says: "The servant-leader is servant first; It begins with the natural feeling that one wants to serve first. Then conscious choice brings one to aspire to lead."

Reichardt has lived his life by these principles.

Upon retirement, he envisions a bit of a shift. "I will have more time to devote to (volunteering), but it will probably be in different capacities and there are some other organizations that I’d like to work with," he said. "When you believe in it and you believe your call-to-serve, which is part of what my belief is, you make time for things that you want to make time for and to make a positive difference in the community."

Reichardt admits it wasn't always easy. "You make sacrifices along the way," he said, adding that the main sacrifice was time away from his home, wife, Elaine, and their two daughters. "I have a great supportive spouse," he said. "She would volunteer with some stuff for Rotary and she helped bake pies for the Tomah Health Community Foundation ... If I needed her there, she would be there."

Prior to moving to Tomah, Reichardt had worked in the Minneapolis/St. Paul area for about 30 years. He is originally from Milwaukee, having graduated from the University of Wisconsin-Stout, Menomonie. He then went on to graduate from the school of banking, at UW-Madison, where he received a certificate of executive leadership, from the Wisconsin School of Business Center for Professional and Executive Development, at the Fluno Center for Executive Education, at UW-Madison.

He has been in banking for over 40 years and has volunteered for organizations throughout that time. Reichardt was recently recognized by the Wisconsin Banker's Association for his 40 years in banking. "No matter where I was, and I’ve been here for just about 13 years now, I believe that you should make the community that you’re in the best it possibly can be," he said.

When asked about some of the highlights from the past decade or so, Reichardt cites participating in the Freedom Honor Flight, which is a program that offers free flights for veterans, to Washington D.C., to visit war memorials. "I was what’s called a guardian," he said.  "It was a volunteer position." He said that he was fortunate to have served as guardian for two Korean War veterans and one Vietnam veteran. "You learn a tremendous amount from the service and the sacrifice that they made," he said. "That was very, very powerful to me."

Another memorable activity was volunteering to coach the Special Olympics powerlifting team. "That was very important to me," he said. Reichardt said that working with "people with intellectual disabilities, all athletes and wonderful people" made him very appreciative.

He said a recent event with the Boys and Girls Club in Tomah was also a highlight. "We did our 20th anniversary celebration here, where the kids dressed up in outfits and costumes," he said. "Then, the board of directors dressed up and we all worked together and had fun, to raise money to support the children and the families of the Boys and Girls Club. That was a lot of fun."

Reichardt has also coached youth sports for over 36 years. There are several large donations from organizations he has also had the opportunity to present. President and CEO of CCF Bank, Stephen Bianchi, recalled meeting Reichardt. "Pete came to F&M with a challenging backdrop. The economy was still recovering from the Great Recession and the bank needed to improve its performance and standing in the community," Bianchi said. "Pete was the new banker in town, but he and the F&M team made great progress in repositioning the bank’s standing." He said Reichardt made a great first impression. "I was impressed with Pete's credentials, after meeting him for the first time, and we found a connection in our careers that helped us build a good working relationship," he said. "Pete’s role at CCF Bank was different than at F&M, but he was the consummate professional and contributed to our team positively. I am grateful for the grace in which he handled the changes and led his team during and after the transition to CCF Bank."

In retirement the Reichardts will spend some time at their cabin in Stone Lake, Wisconsin, but of course, volunteer opportunities are already being sought.  "I've already joined the Lions Club up in Stone Lake and I will be working with them," he said. Reichardt hopes others in Tomah and throughout the state will be encouraged to volunteer. "It's not just not me doing it, there are so many other wonderful people in our community doing it, as well, but if you have the commitment to it, and belief in it, and want to do it, then you do all that you can do to help promote and foster the spirit," he said. "Maybe, as some other people see the commitment and service other people are doing, maybe they’ll feel called to serve."

Reichardt will transition to a part-time position at the bank until the end of January. "My last day of full-time work will be Sept. 30th, but I’ll continue to be actively involved in the community and many of these activities," he said. "I don’t know which ones yet."

Some of the activities are as follows:

-Greater Tomah Area Chamber of Commerce Board, Former President, Board member and volunteer

-Families First of Monroe County, VP of the Board of Directors

-Boys and Girls Club – Tomah, VP of the Board of Directors

-Tomah Health Community Foundation, President of the Board

-Andres Charitable Trust, Trustee and President of the Board