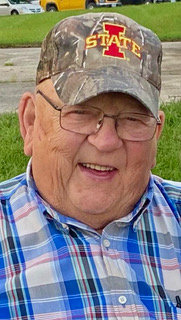 MONTFORT - James “Jim” Roland Schmitz, 81, of Montfort, Wisconsin, formerly of Greeley, Iowa, passed away on Thursday, January 6, 2022, surrounded by his wife and four sons, at the Upland Hills Hospital in Dodgeville, Wisconsin. Jim was born on April 29, 1940, as the next to youngest of 8, to Hubert and Loretta (Baus) Schmitz of Norwalk, Wisconsin. He attended St. Mary’s Ridge Catholic School and Cashton High School.

Jim worked on the family farm throughout his childhood and high school years. When he was out of school, he worked at various creameries throughout Wisconsin and Iowa. Jim then started his long-term career as the manager/field man at Farmer’s Cooperative Creamery in Greeley until its closing in 2001. He rounded out his 60+ years in the dairy industry by working as a field man for Swiss Valley Farms. Jim was well known in the dairy industry, achieving many awards during his tenure.

After moving to Iowa, Jim met Mary Berns and they were united in marriage on October 9, 1965, at St. Joseph Catholic Church in Garnavillo. They were blessed with four boys and called Greeley home for many years. Mary departed from this world in 1997.

While living in Greeley, Jim was an active member in the community, serving on the town council as mayor, managing the local tug-of-war teams, attending St. Joseph Catholic Church, coaching Greeley Little League, running local AA meetings, and being a part of numerous other organizations and activities. One of his proudest moments was accomplishing 38 years of sobriety.  Jim was a role model and always provided leadership and mentorship to anyone in need.

Jim later met Melissa Winkers of Fennimore, Wisconsin, through the dairy industry. They married on August 16, 2003, at St. Gabriel Catholic Church in Prairie Du Chien and moved to Montfort. Together they enjoyed watching their families grow. Since 2009, they took their grandchildren on summer vacations all across the country. During his time in Montfort, Jim served as the village president and was an active member at St. Thomas Parish.

Over the years, Jim was often found heartily laughing (or yelling) while bellied up to a table playing cards, tending to things at the Chicken Ridge Deer Camp, going on countless fishing and hunting trips, and spending time with his family and friends. Wherever Jim was, he was sure to be known by his distinctive laugh, humorous one-liners, and famous stories. His loud voice and big hugs will be missed by many for generations to come.

Memorials may be directed to the family. In lieu of flowers, the family requests you call a loved one and share memories of Jimmy for years to come.

Visitation:  11:00 a.m. to 7:00 p.m., on Saturday, January 15, 2022, at Leonard-Muller Funeral Home in Manchester, Iowa. Inurnment and burial will be held at a later date at St. Joseph Catholic Cemetery in Greeley, Iowa.

The Leonard-Muller Funeral Home & Crematory of Manchester, Iowa is assisting the family. Online condolences may be made at www.mullerfh@iowatelecom.net