House of Shadows scares and cares for 25 years

Hearts race and shine in the same moment 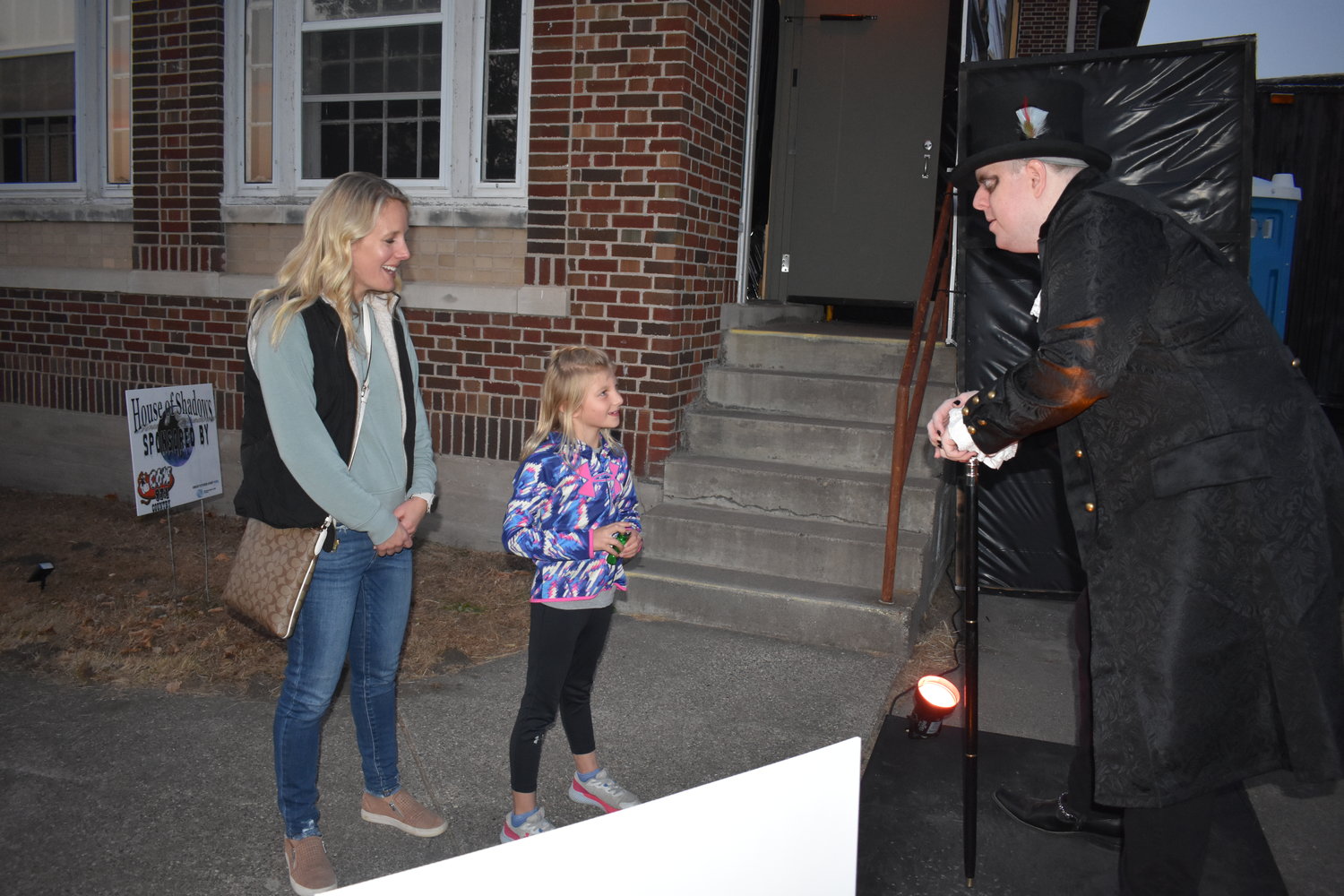 Arriving for the “Not so scary” session, this young girl seems very excited as she listens To the Creature Keeper read off the rules.
Benny Mailman 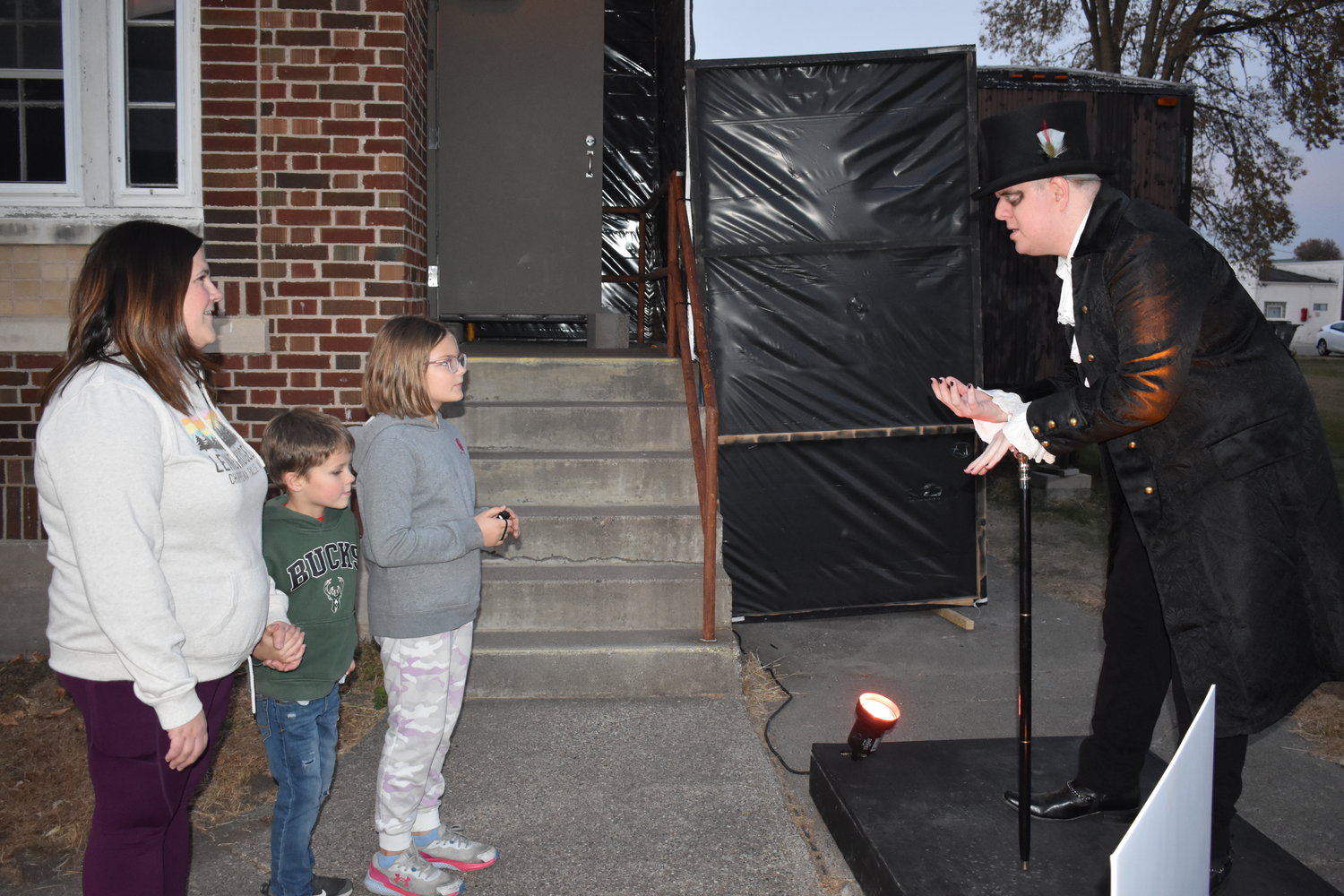 The Creature Keeper, aka: Mike Austin, explains the rules to Lauren Haun, mother of Canton (middle) and Tatum Haun. They came early, for the “less scary” portion of the haunted event.
Benny Mailman 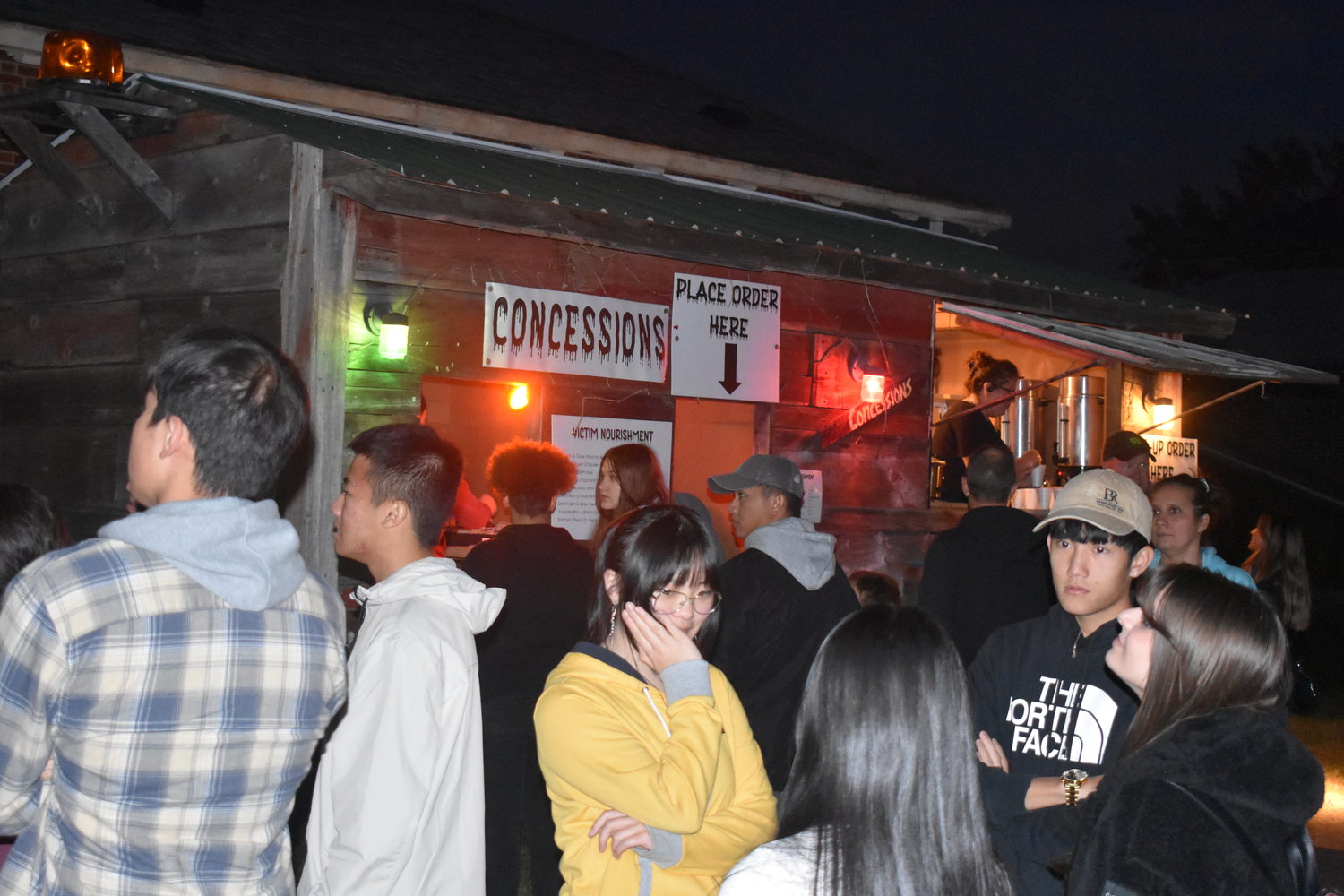 Friday night was busy by 6 p.m.. Paul Solberg, who started the event 25 years ago, said that they will see a thousand people every night through the final weekend.
Benny Mailman 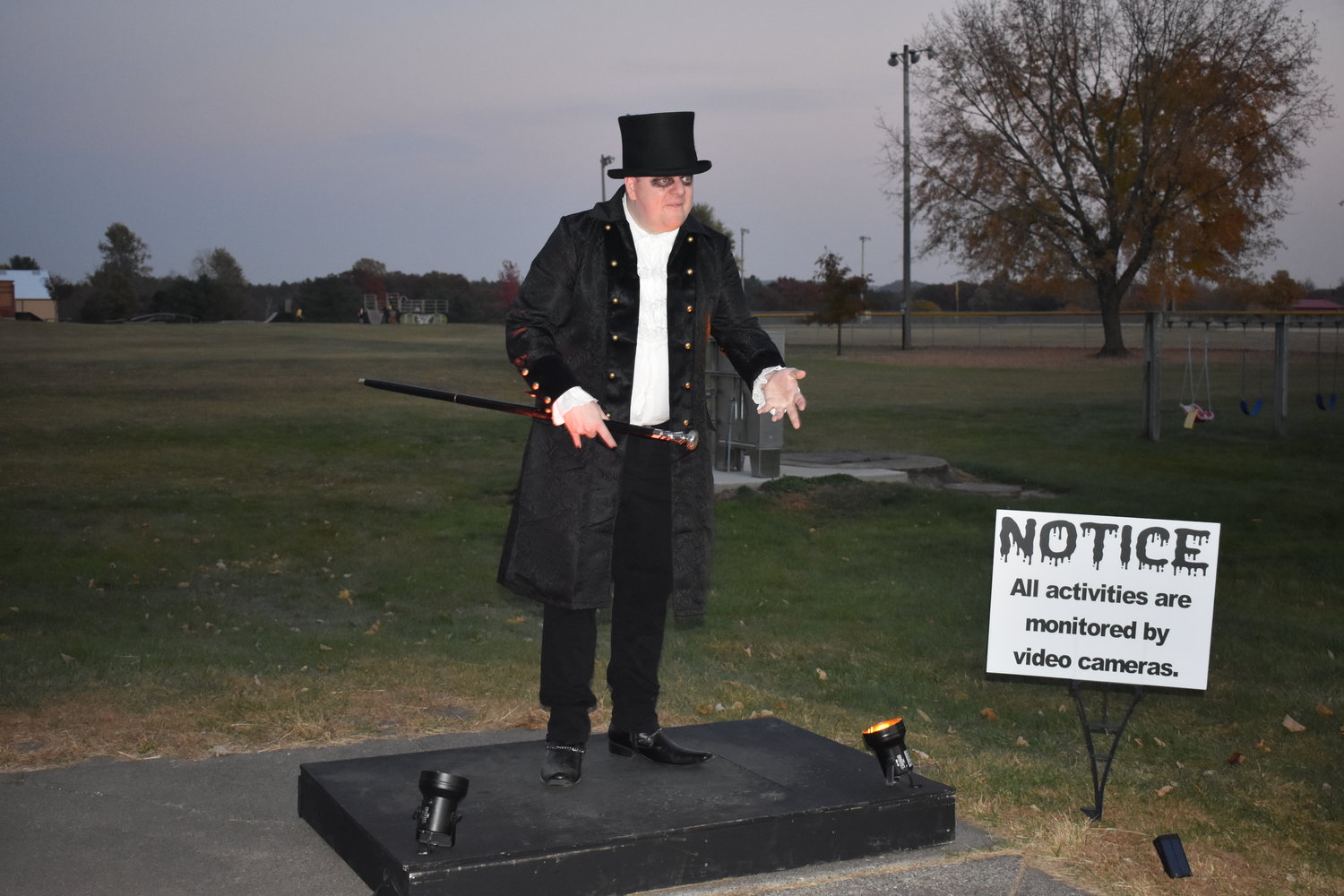 The Creature Keeper, Mike Austin, enjoying his first volunteer year. Mr. Keeper would recite the rules to all customers before they entered.
Benny Mailman 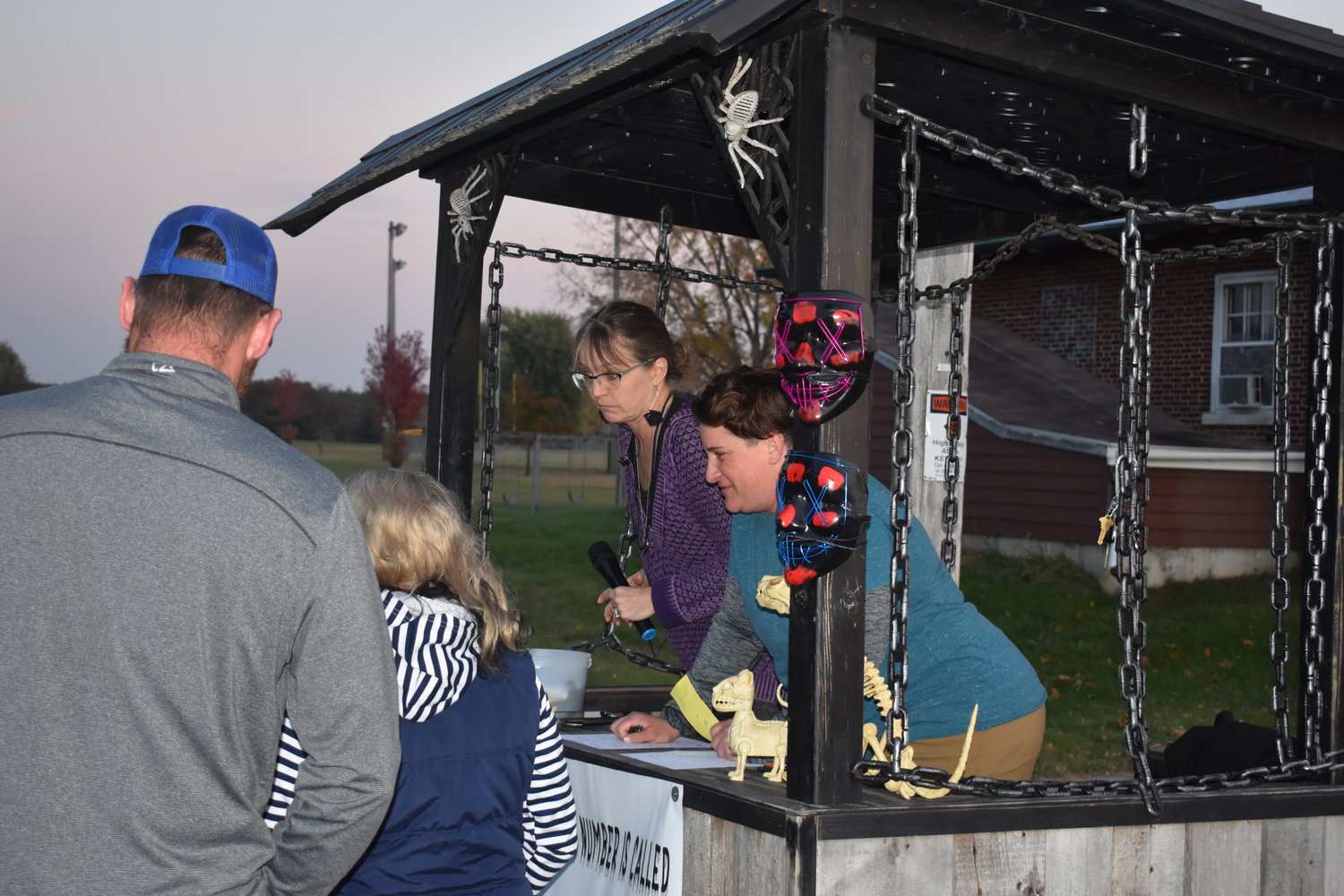 Larsi Bendriss and Steph Timmerman hold down the ticket booth. The booth was adorned with skeleton animals and masks. Bendriss and Timmerman would take the tickets, then send attendees to the Creature Keeper (Mike Austin.)
Benny Mailman 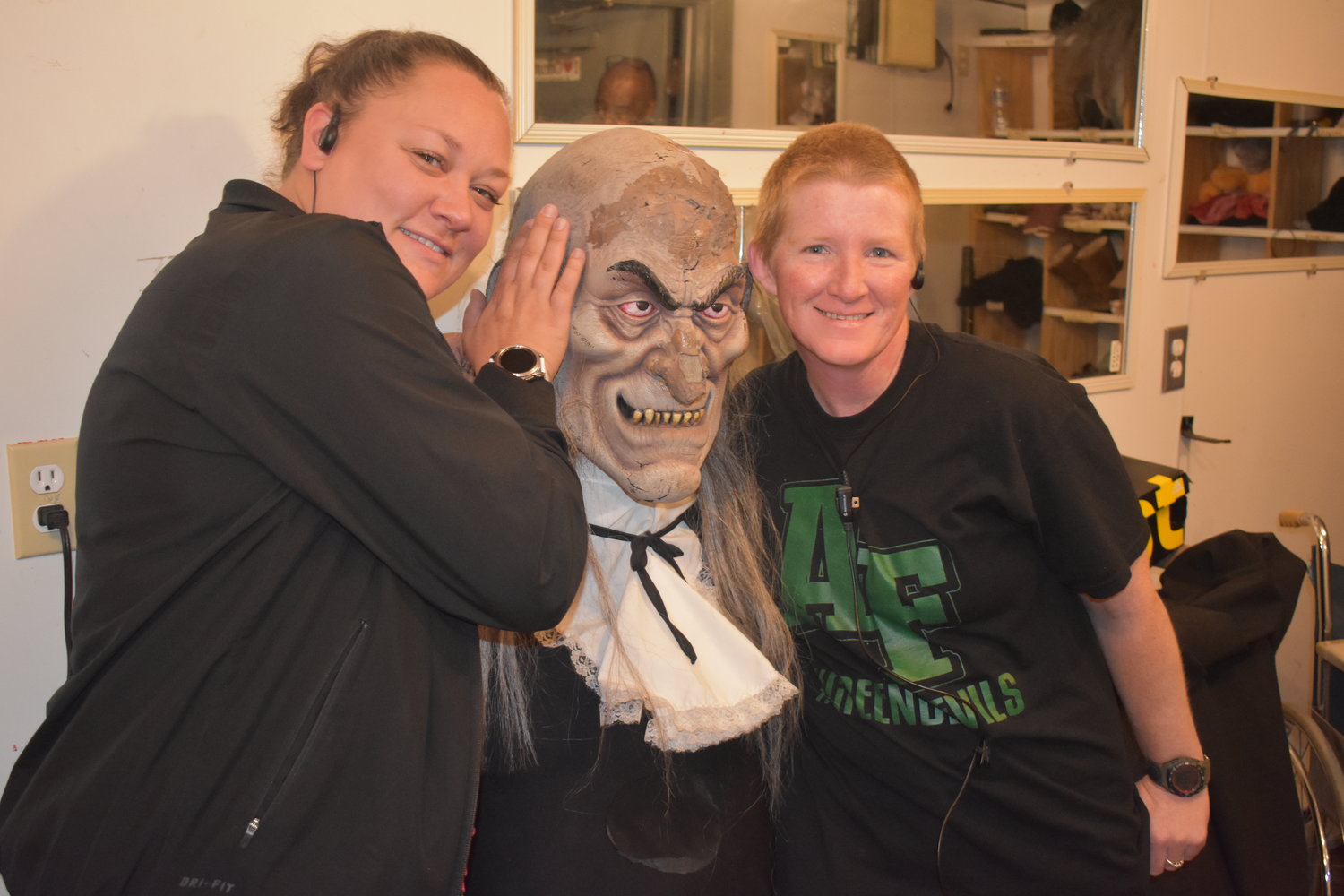 Make-up artist, Christine Huber (right), poses with Edgar D. Vour (middle) and Rachel Bahl (left). Rachel makes sure that volunteer “Scarers” find their costumes, get their makeup on and are in position for the event.
Benny Mailman 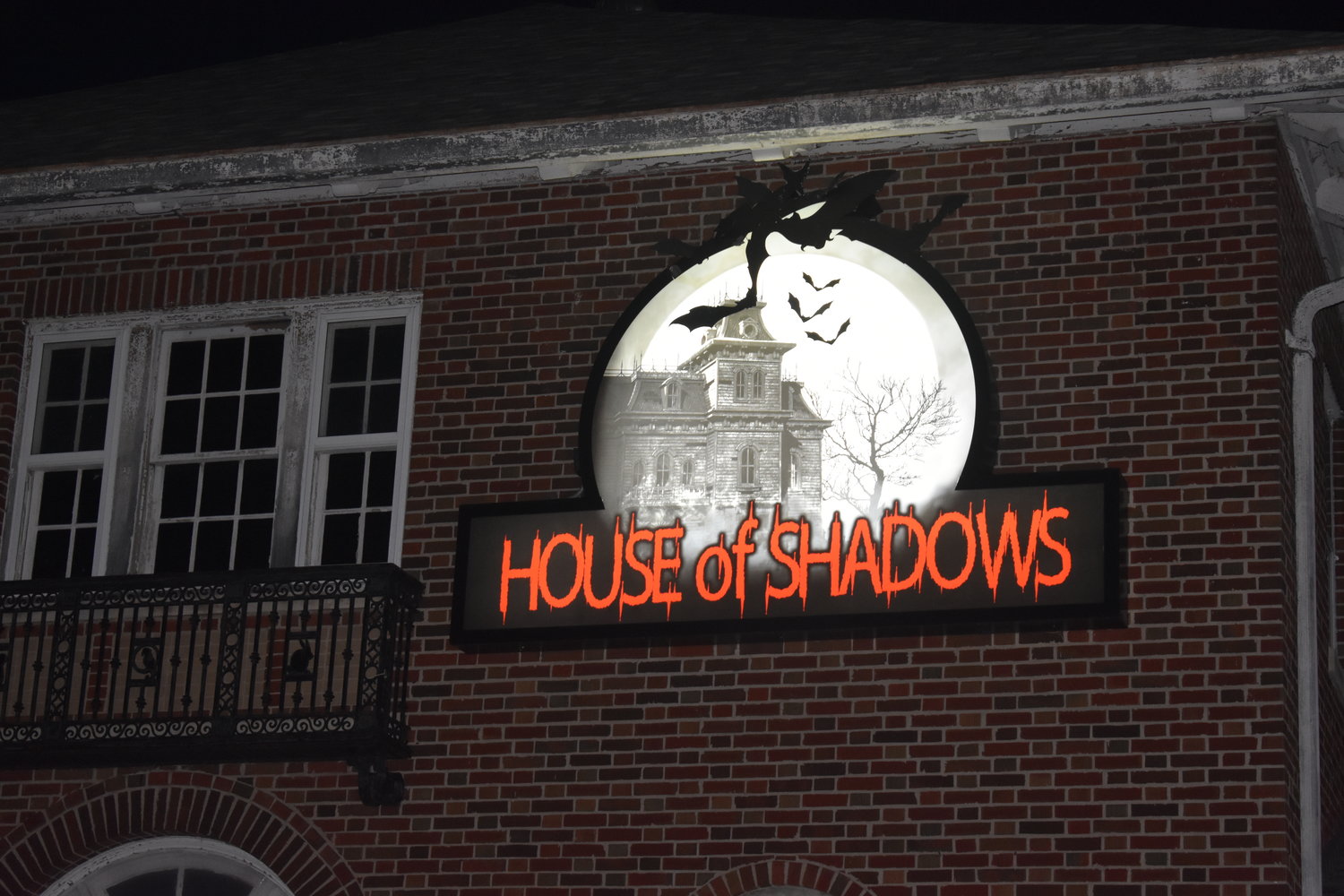 House of Shadows has legitimate credibility as a haunted house, having been a childcare center and infirmary for kids with tuberculosis. It was also a sanitarium and a nursing home. Ghosts have been seen and felt in the old buildings.
Benny Mailman
Previous Next
Posted Monday, October 24, 2022 12:00 am
Benny Mailman Editor

Every year, in October, pumpkins, witches, skeletons, ghosts and goblins travel to the front-and-center of community attention, especially the youth. Bags and buckets filled with candy dance in their heads, to be replaced by sugar-plums soon enough. Of course, there is the “Trick,” in Trick-or-Treat, that needs to be accounted for, which is a synonym this time of year for “Scare.” In Sparta there is an event that has taken place in every October time slot, for 25 years, that directly addresses the “Scare,”: The House of Shadows.

The House of Shadows is located at 501 Osborne Drive, a skeleton’s-bone-throw away from the Boy’s and Girl’s Club, where all proceeds from the scary venue end up. Jennifer Simunich, Executive Director of the Boy’s & Girl’s Club, stated that the volunteers are the catalyst that causes success to ring out from the event. “Nightly we have roughly 50 volunteers or more, working as ticket takers, concession stand attendants, make-up artists and of course, the “Scarers,” who are just as eager to be there as the folks and kids coming to be scared,” Simunich said. “It truly is a labor of love. Every year, when the House of Shadows is concluded, and the numbers are added up, a total of around 40, 000 volunteer hours have been put in. We are so fortunate to have them.”

Last Friday night, Steph Timmerman, a volunteer who has previous experience with the Onalaska haunted house, helped hold down the fort at the ticket booth. She anchored the scary anticipation with calmness, as if to send a message to the nervous kids, “It will be OK.” Larsi Bendriss, Treasurer for the Boy’s & Girl’s Club, took tickets from parents, as their excited-and-nervous-faced children bounced around with eager enthusiasm. Bendriss kept the anxiousness and anticipation rolling for the youngsters, as she spoke in a spooky way, before directing them toward the Creature Keeper and rule announcer, Mike Austin.

Lauren Haun showed up with her children, Canton (5), and Tatum (7.5). Canton was excited, and expressed his feelings to Bendriss, as his mother handed over the tickets. “This is my first time and I am excited,” Canton exclaimed. Tatum informed the ticket takers that this was her second time, and she was excited too.

Lauren Haun was taking her children to the “Not so scary” portion of the event. Families that venture in from 5:30 p.m. to 6 p.m. are given a flashlight and the volunteer “Scarers,” inside the House of Shadows, are put on alert to govern the scary, easing down their professional frightening techniques to half throttle, for the youngsters. But at 6 p.m., it is the attendees who are put on “Red Alert,” by the cast of Shadows that full scary has been engaged.

After handing their tickets over to Bendriss and Timmerman, the Haun family then moved on to the Creature Keeper, Austin, who stood tall on a black platform and was dressed in a black cloak, complete with the same-color-top hat. With black circles surrounding his eyes and a thick wooden cane circling while he talked, the Creature Keeper would explain the rules for the brave youth and their parents. After hearing the rules, the participants would travel through the haunted house.

Jerry Sample, Site Director for the Boy’s & Girl’s Club, said that it takes approximately 15 to 20 minutes for folks to flow through the frightful adventure. He went on to explain that all volunteers are put through an extensive background check, and that video surveillance ensures that everything is running smoothly.

Sample then went on to explain the reasons why this haunted house may hold extreme credibility over other haunted houses. “This building was actually a childcare center, later serving as an infirmary, where kids were quarantined, when they had tuberculosis. Since it was built in the 1800s, 320 children have died with the walls of the structure,” Sample explained. “Later on, it served as a nursing home, where folks died also. So, are there ghosts inside? The probabilities are high.”

Wisconsin Ghost Investigators came to the site and concluded that there was indeed paranormal activity, consistent with ghosts and spirits. There is no air-conditioning in the building, yet freezing temperature would surround occupants, causing them to shiver from both the cold and fear. Construction workers have reported hearing voices of children and when dogs are allowed in, they all run to the exact same spot in the building. Lights were turned off when the workers left, only to be found turned on upon their return.

Helping to ensure that the scary reaches its full potential for the attendees, is Christine Huber: air-brush and make-up artist volunteer for the event. Literally behind the scenes, Huber works  her magic in the make-up trailer, behind the House of Shadows. “I am in charge of the creature construction,” says Huber. She stood next to a shoulder-mounted costume, of a very scary man. “This is Edgar D. Vour,” Huber said, laughing as she voiced the name out loud.

Rachel Bahl, volunteer coordinator, ran into the trailer with her headset on, checking on Huber and how everything was going. When asked what her roll was, Bahl thought for a second, then said, “I am a gopher for Jen [Krieder, Board President and House of Shadows Volunteer]. I make sure the volunteers find their costumes and get into them on time. Then I make sure that everyone is in their proper places when ‘Go time’ hits.”

With one weekend remaining, the entire cast that has the event running at an optimum level, is feeling quite confident that this will prove to be another successful venture. They fully expect the last weekend to be strong and heavily attended, being the official holiday weekend.

Running around the event, costumed in a full-length black-duster cloak, complete with headset and a check sheet, was Paul Solberg. Solberg, who started the haunted house at the original Boy’s & Girl’s Club, on Court Street, 25 years ago, said that it was originally set up strictly as entertainment for the kids. “Then the kids asked if they could bring their parents and we said ‘Sure, but they have to pay a dollar,’ and that was how it all started,” Solberg said. “Last year we had 6,000 people go through. We have a thousand people go through a night, max.”

While the House of Shadows brings in a solid portion of the budget needed to keep the Boys & Girls Club running strong, they have Boos & Booze coming up on October 27th. There are also free trick-or-treat events set up for the Sparta youth.

10.27.22 - Boos & Booze 7-9 pm $30/ticket - limited space.  Guests will meet at the House of Shadows for a private tour before caravanning to the Cork & Barrel for a complimentary Halloween infused cocktail and appetizers.  We will learn about paranormal investigations, talk with a medium and meet local author, Joe Cook who will be doing a book signing of his book The Haunting of Sparta; Mysteries in Small Town.  Profits will benefit the Boys & Girls Club of Sparta

KIWANIS STUDENT OF THE MONTH – SEPTEMBER