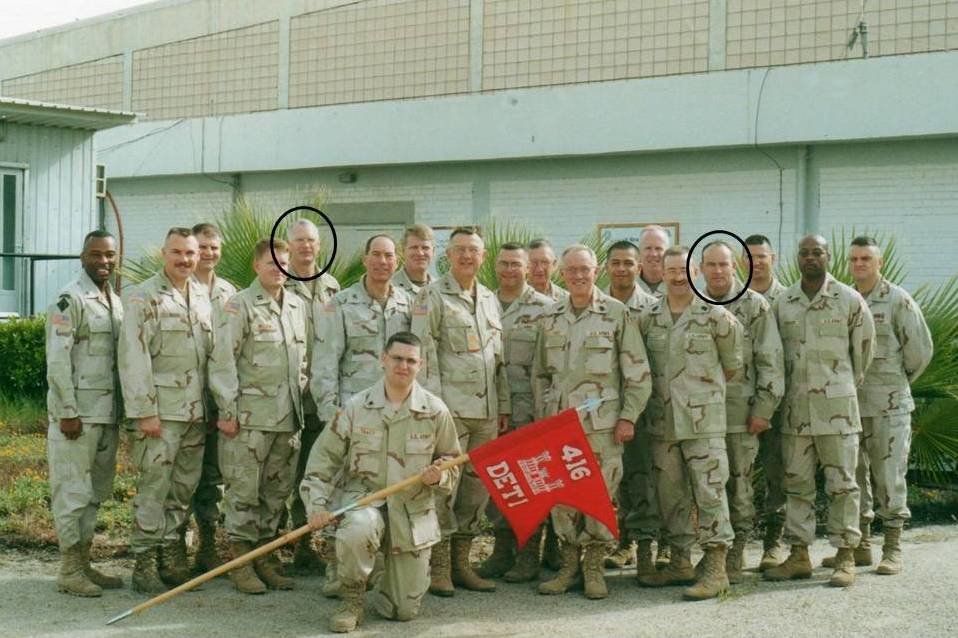 An older photo of the author with the new commander.
John Gessner
Posted Thursday, August 4, 2022 12:00 am
By JOHN GESSNER

The 88th Readiness Division, the senior command at Fort McCoy, changed commanders on Saturday, July 30th. Major General (MG, 2-Star) Darrell Guthrie relinquished command of the 88th, passing the unit colors to MG Matthew Baker. In the change of command ceremony, the passing of the colors is a time honored tradition that dates back to Frederick the Great, King of Prussia in the 18th century. The colors identified the unit and the keeper of the colors was the commander. In the heat and noise of battle, troops could rally around the colors to keep their formations together.

MG Guthrie has commanded the 88th Division since July 2020. He remarked that “It was a virtual high five between him and the previous commander MG Daniels in the parking lot. We were four months into Covid, so assemblies were still discouraged.”  Major General Guthrie kept the 88th Division at a high level of readiness as he oversaw activities and organizations over a nineteen-state region. He thanked his family, soldiers, civilians and the contractors of the 88th Division for keeping him on track and on schedule. He also mentioned that having arrived from Alabama, where it can get extremely hot, the Wisconsin winters were quite an eye opener.

Significant during his tour as the senior commander at Fort McCoy was the implementation and oversight of “Operation Welcome Allies.” With a one week notice, 13,000 Afghan refugees arrived at Fort McCoy requiring housing, feeding and medical care. A robust inoculation program was established and in a week’s time 95% of the Afghans were inoculated for the prevention of measles, TB, Covid and many other diseases that the Afghans had no previous health care for. They also issued sixty-five birth certificates during this period.

MG Guthrie’s retirement ceremony was held later in the day and after thirty-seven years in uniform he will return to his adopted state of Texas. There, he will continue his law profession, possibly on a lighter schedule.

The new commander, MG Matthew Baker said in his opening remarks that, “His speech will be short because he hasn’t done anything yet.” In actuality, MG Baker is the perfect selection for the 88th Division coming from a previous 2-Star command of the 416th Theater Engineer Command in Darien, IL.  This is a rare feat that someone would command twice at the 2-star level, attesting to his competence for the job. He brings with him a wealth of experience having served in all levels of command from platoon leader to division level command. Major General Baker’s awards include the Legion of Merit (three awards), the Meritorious Service Medal (four awards) and many others. Significant was his service in Afghanistan in 2001, early in the conflict, where he was awarded the Bronze Star. Twenty years ago, during his time in Southwest Asia, he served as a Captain along side of the author. To his comment “that he hasn’t done anything yet,” he plans to hit the ground running and if he can bring the 88th Readiness Division just a little higher than the high standards that MG Guthrie achieved, he will consider it a success.

The 88th Readiness Division was constituted in 1917, having celebrated its 100th anniversary in 2017. At that ceremony was a veteran that fought with the 88th in World War II. The 88th’s first deployment was to France in World War I. In World War II they entered the front lines in Italy and participated in the capture of Rome on June 4th, 1944, 2-days earlier than the famous D-Day invasion of France. In all, they served 344-days in continuous combat. The patch of the 88th is a blue clover formed from two 8s. In some cases, a “Blue Devils” tab was worn above the patch causing the Germans to think that they were an elite storm trooper division, causing considerable fear when they encountered them.  They remained in Italy until 1947 on a peace keeping mission, primarily between the Italians and Yugoslavians over a border dispute. The Fort McCoy headquarters building is named for Captain Robert Roeder of the 88th, who was a posthumous Medal of Honor recipient from the Italy campaign. In later conflicts the 88thmobilized units in the Vietnam War, Dessert Storm, Iraq and Afghanistan.