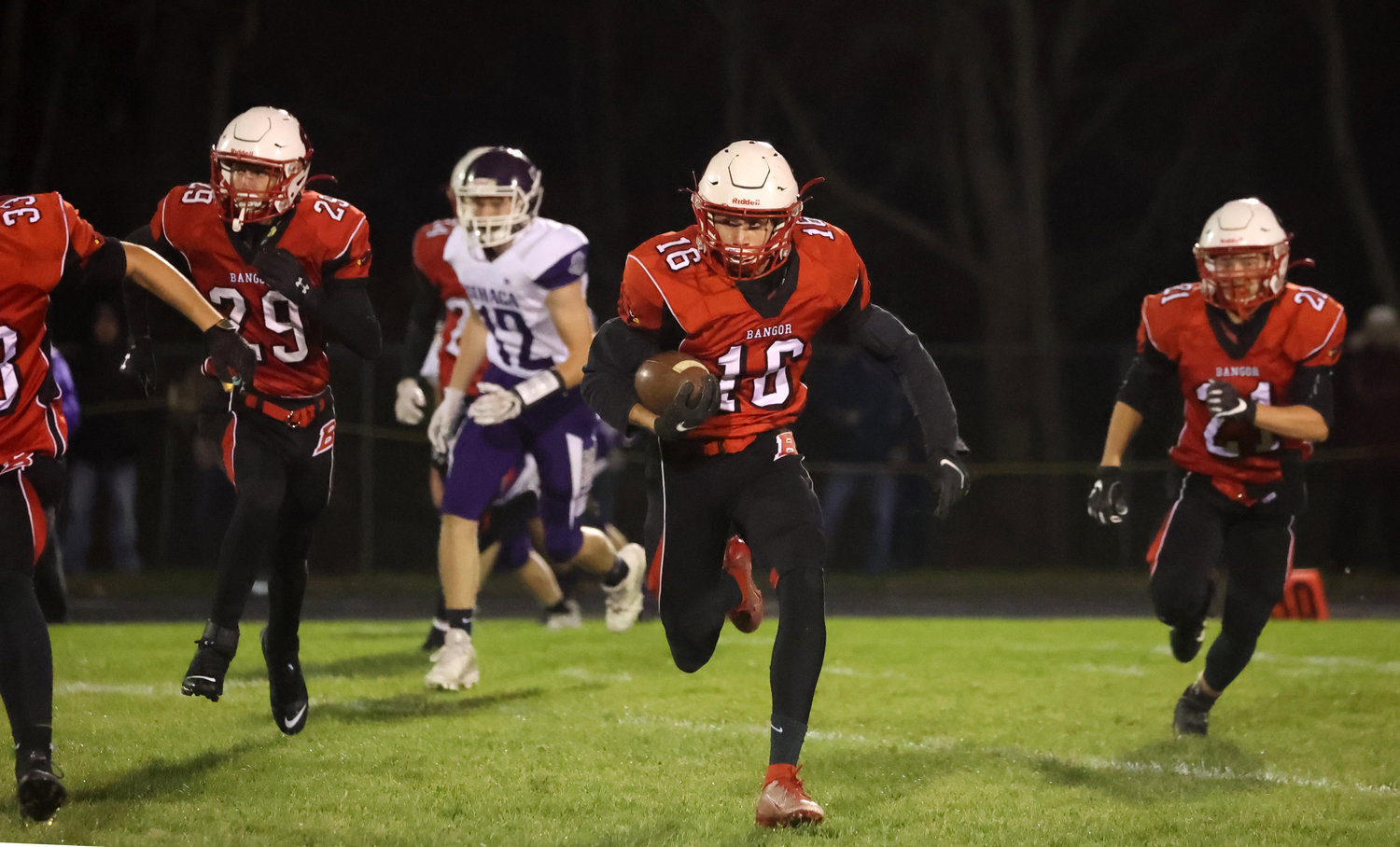 Bangor's Clayton Lyga picks off a pass and returns it during the first quarter of Friday's Division 7 Level 1 playoff game with Ithaca.
Photo by Nate Beier/GX3 Media 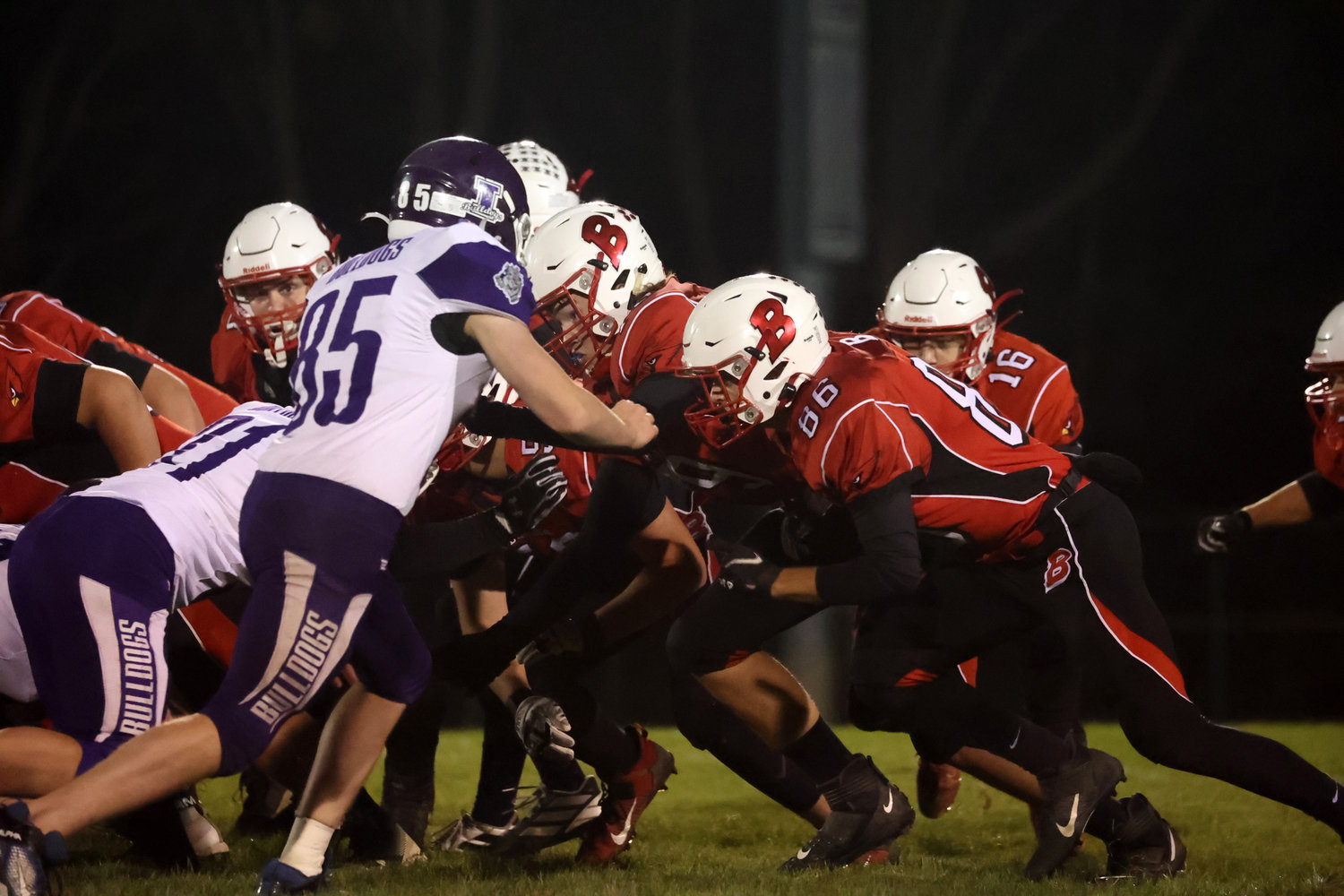 Bangor's Trey Peters (86) and Braiden Cavadini (79) lunge forward to try to open a hole for the running back during the first half of the Cardinals' Level 1 win over Ithaca.
Photo by Nate Beier/GX3 Media
Previous Next
Posted Thursday, October 28, 2021 7:00 pm
By ZACH RASTALL, Sports Writer

This season had the potential to be a sea change type of year for Bangor football.

The Cardinals bid farewell to longtime coaches Rick Muellenberg and Kevin Kravik — who oversaw the program’s continuing golden age — and entered the fall with the most legit challenger to their Scenic Bluffs throne in years in the form of Cashton.

First-year head coach Todd Grant, previously an assistant under Muellenberg, helped provide some welcome continuity for the program in this transition season. But the team was dealt a couple difficult hands throughout the fall that could have easily derailed their season.

The Cardinals lost standout junior Tanner Jones to a season-ending injury and suffered their first conference defeat in eight years with a 20-13 Week 7 loss to Onalaska Luther.

Those successive setbacks could have been a knockout blow for the team. Instead, Bangor used it all as a rallying point, buckling down and playing some of its best football of the year to get back to a familiar spot.

“I give a lot of credit to our seniors for that. They held things together,” Grant said. “I’ve been coaching for a long time in different sports and I’ve seen a lot less than that absolutely derail a season, and they did not let that happen.”

Following that loss to Luther, the Cardinals responded by blowing past Brookwood 37-7, eked out a dramatic 17-13 victory on the road over archrival Cashton and tallied an impressive 35-14 win over No. 6 seed Ithaca last Friday in Level 1 of the WIAA Division 7 playoffs.

After all the change and obstacles experienced throughout the fall, it’s all wound up with a familiar setting for Bangor: its season still alive as we creep closer to Halloween and the postseason stakes continue to heighten.

If the Cardinals are to advance any further, they will need to once again go on the road and take down a Cashton team that is desperate to finally beat them.

“Nothing’s changed. We’re going to have to play well to win. It’s not like there have been big changes in two weeks,” Grant said of the impending rematch. “It’s still going to be a tight game that’s going to come down to turnovers and who executes better and those type of things.”

The stage is set for one of the biggest — if not the biggest — chapters in the storied history of the Bangor-Cashton rivalry. The second-seeded Eagles (8-2) will welcome in the third-seeded Cardinals (8-2) in a Level 2 showdown Friday, October 29 in Cashton.

This is a place Bangor has been many times before over the past decade, and these are the kind of games you dream of playing regardless of the opponent. Even then, Grant didn’t downplay the significance of Friday night. It’s not every day you get to face your greatest rival with so much hanging in the balance.

“We’re not going to shy away from it,” Grant said of the rivalry aspect. “It definitely adds some excitement to it and I’m sure it’s going to be a wild night up there.”