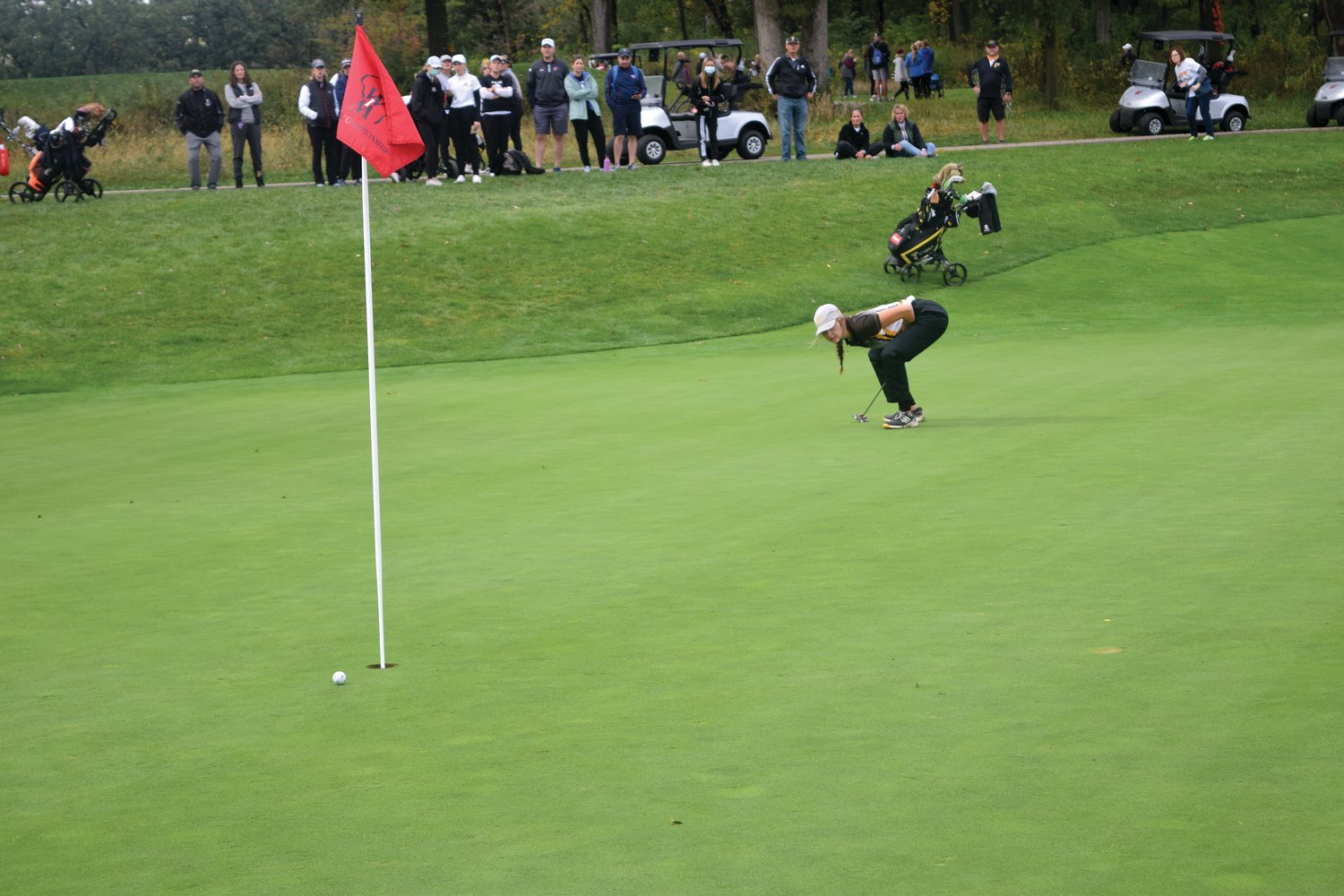 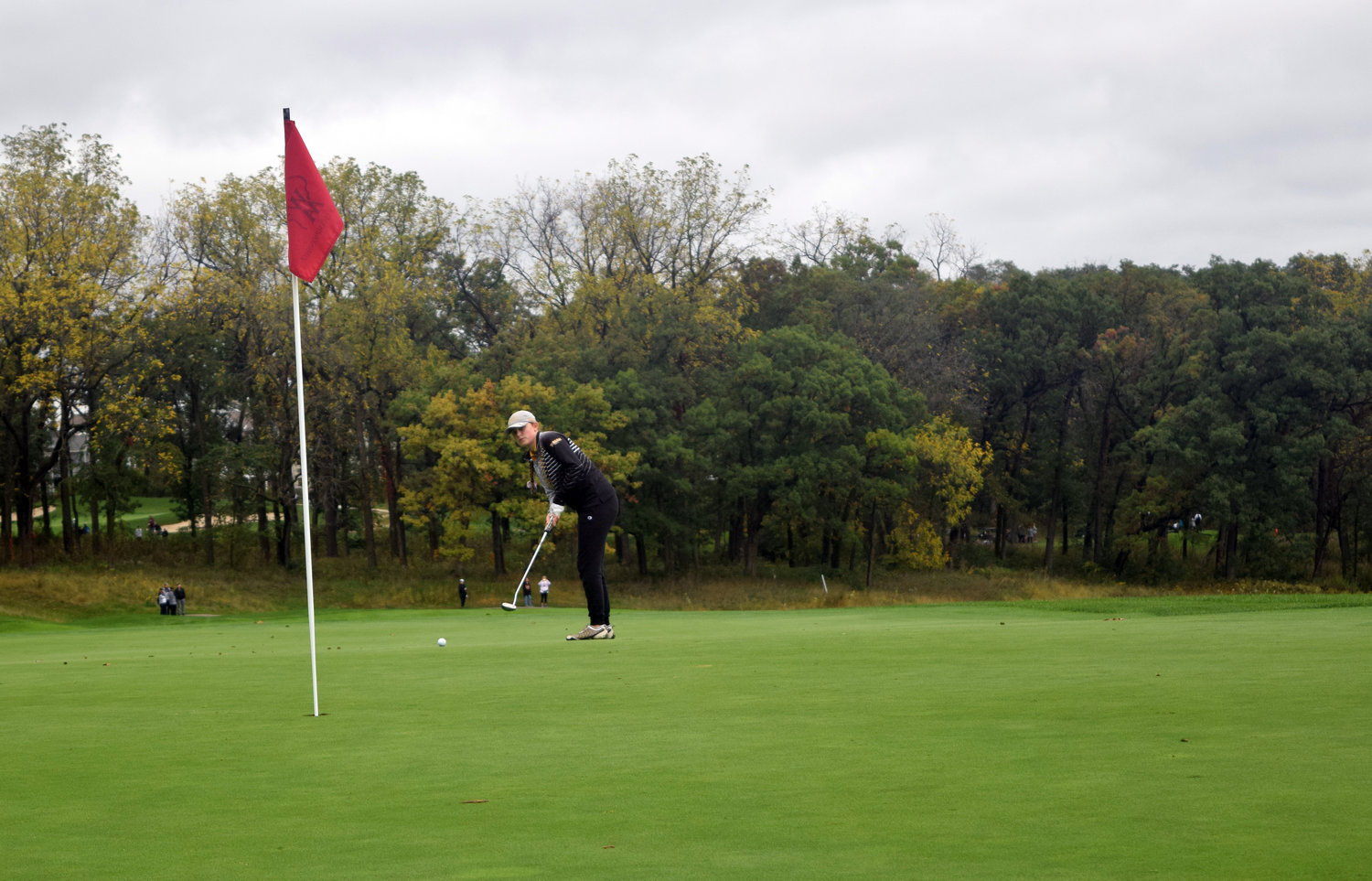 Tomah senior Sophie Pokela excelled in soggy conditions on the first day of the state girls' golf tournament, carding a 4-over 76 despite rain and a round interrupted by a weather delay.
Photo by Zach Rastall 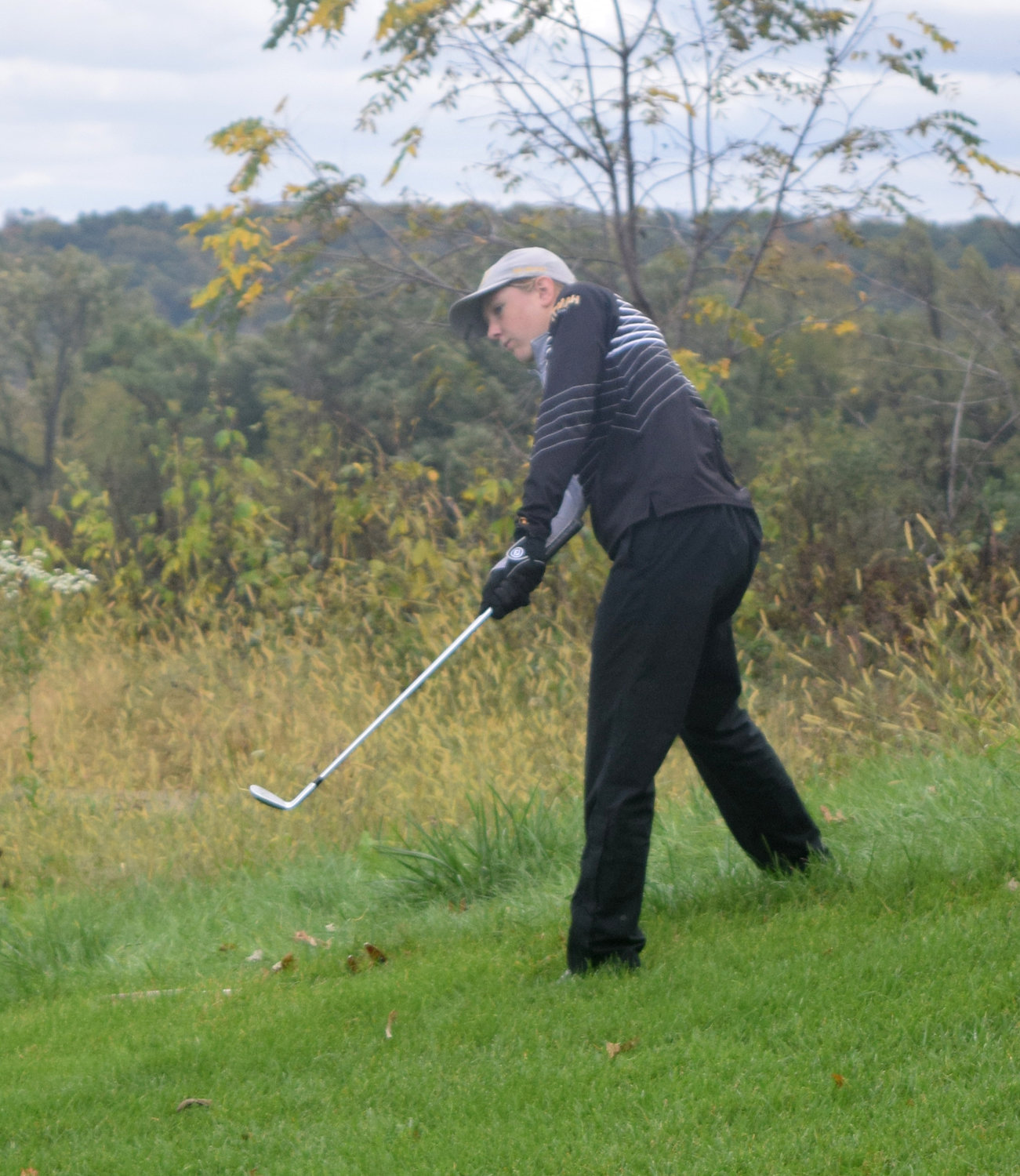 Tomah junior Brin Neumann shined for the Timberwolves on Day 2 of the girls' golf state tournament, firing a 4-over 76 on the day.
Photo by Zach Rastall 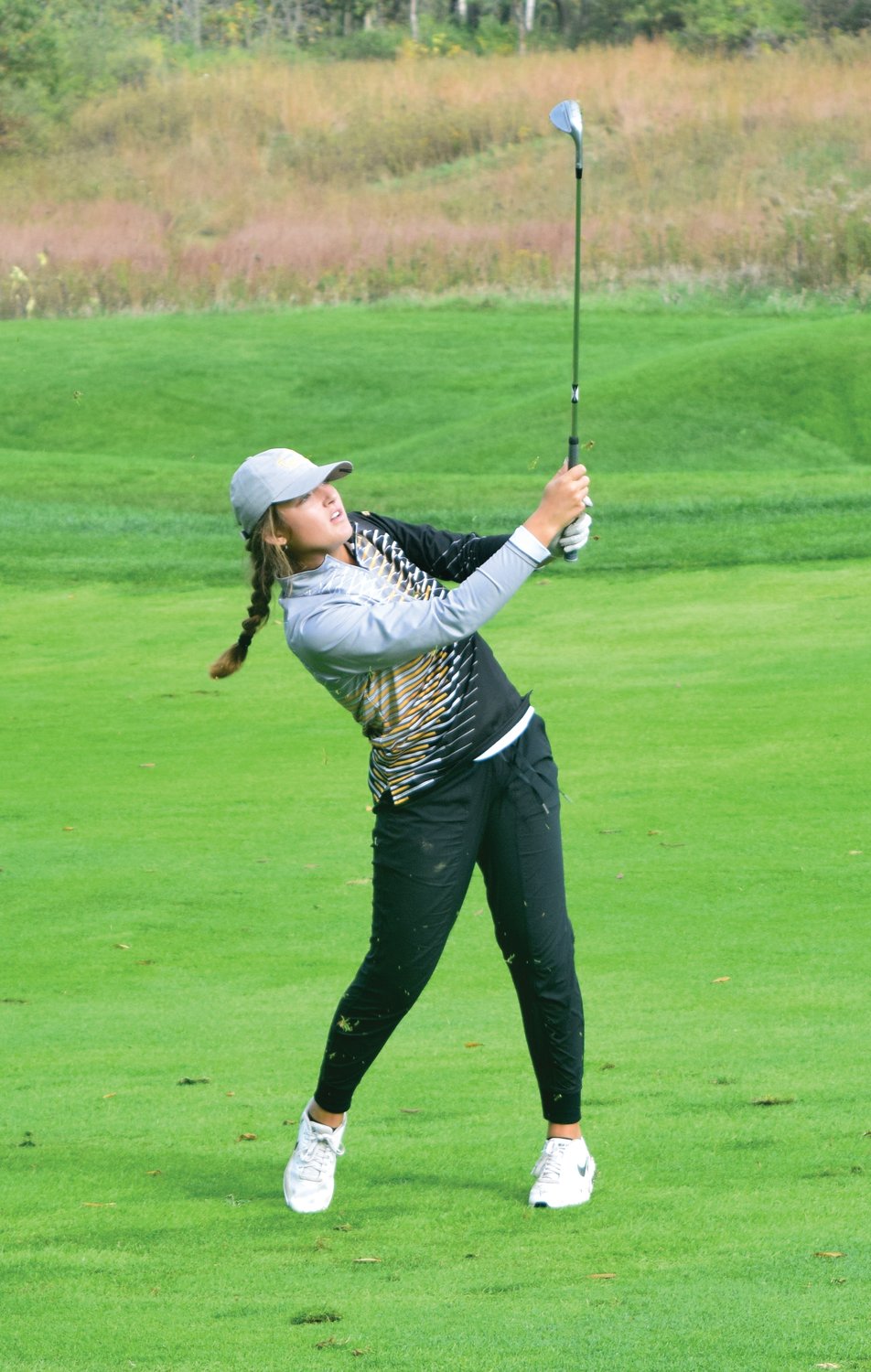 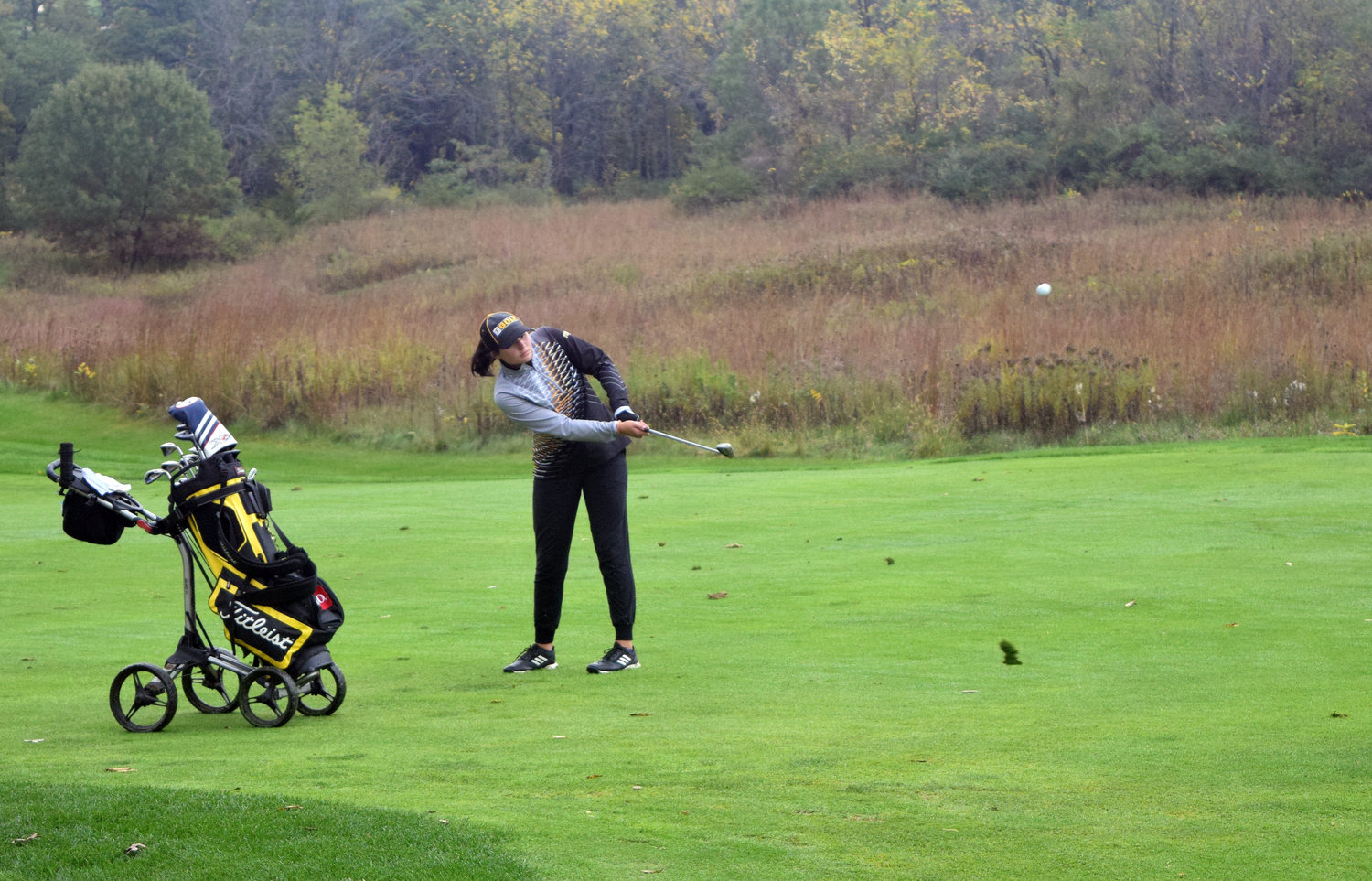 On a rainy Monday at University Ridge Golf Course, the Tomah girls’ golf team saw their highest expectations for their state appearance fall by the wayside in the tough conditions.

The Timberwolves struggled out of the gates on the first day of play, but recovered with a stronger showing on the second at the 2021 WIAA State Girls’ Golf Tournament Monday, October 11 and Tuesday, October 12 at University Ridge in Madison.

Play got off to an inauspicious start early Monday afternoon with a weather delay that lasted around two hours. The delay and the rain throughout the day created a challenge for all players, and most of Tomah’s golfers had their difficulties contending with the soggy conditions.

Senior Sophie Pokela was the outlier, faring quite well and shooting a 4-over 76 to tie for 12th on the Division 1 individual leaderboard after the first round.

“First day, our senior Sophie Pokela did outstanding in the elements,” said Tomah head coach Tonya Gnewikow. “It was over an 8.5-hour day. That’s hard, to mentally gruel that long.”

However, no other Tomah player finished better than a tie for 44th and the Timberwolves collectively shot a 341 to sit in ninth out of the 12 Division 1 teams after Day 1.

“To be honest, it was just trying to keep our stuff dry constantly,” Gnewikow said of the team’s Day 1 struggles. “Then that hour-and-45-minute rain delay is pretty taxing. Putts just weren’t sinking for us.”

On the second day, Tomah managed to shave seven strokes off its score for a 334. That was tied for the fifth-best Division 1 team score on Tuesday, and the Timberwolves’ cumulative score of 675 (+99) placed them eighth in the final Division 1 team standings.

Ultimately, the shaky Monday showing thwarted the team’s hopes of scoring a top-5 finish at state for a second consecutive year.

Westosha Central claimed the Division 1 team state championship with a winning score of 637 (+61), seven shots clear of second-place Hamilton and its final tally of 644 (+68).

“We kind of went into (Tuesday) with the mentality of let’s play a one-day tournament and see what we can shoot to see where we should be and should place,” Gnewikow said. “Today, we did that. Our team score was much, much better.

“We had a good attitude to just come back. We wanted more. We didn’t want to leave here and not show what we can do.”

Junior Brin Neumann was the standout performer for Tomah on Day 2 of the state tournament. Neumann rebounded from a disappointing first round to fire a consistent 4-over 76, tied for the ninth-best round by a Division 1 golfer on Tuesday.

In her second round, she shot a 38 on both the front and back nines while carding four birdies (all on par 5s) throughout the day.

“The conditions were really rough the first day and I think it affected a lot of playing, but the best players out here can adapt and I know I could’ve adapted a bit better,” Neumann said. “The second day came around and I was feeling down, but I feel like overall I put in a really good round, and I loved the weather today. It was really nice.”

Neumann recorded a 90 on the first day to go along with her 76. In total, she finished with a 166 (+22) to tie for 28th overall in the Division 1 individual standings.

Pokela was Tomah’s top performer with a tie for 17th place. Her second round wasn’t as crisp as her first in the tough conditions, following the 76 up with an 83 for a total score of 159 (+15).

Though Pokela admitted she didn’t have her A game on Tuesday, she can still hang her hat on one heck of a round Monday in conditions that tripped many other golfers up.

“I’ve always been a person that kind of likes to play in the rain because, normally, a lot of people when they play in the rain and stuff like that, they just are like automatically out of the tournament. They have a bad mental state,” Pokela said. “That’s why I just try to stay focused and play my game and I ended up playing pretty well.”

The Timberwolves weren’t quite able to achieve all they had hoped at state this fall, but that barely puts any kind of damper on a historic season. For the first time in program history, Tomah won conference, regional and sectional titles all in the same year. A state appearance was gravy on top of it all.

The Timberwolves have now made it to state as a team three years running. They lose Pokela, their No. 1 golfer, to graduation in the spring, but otherwise bring back a wealth of experience, so this golden age of Tomah girls’ golf shows no sign of slowing down soon.

“We’re a young team yet,” Gnewikow said. “We’ve got a lot of juniors coming back, so we’re hoping to have a successful season next year as well.”

Stevens Point Area Senior High (SPASH) junior Riley Pechinski shot a 70 and a 71 for a 3-under 141 to bring home the individual Division 1 state title. She was the only golfer in either division to shoot under par for the tournament.

The Arcadia/Independence team finished fifth among the six participating D2 teams with a score of 780 (+213).