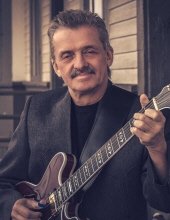 Since birth, Stevey was born to be a musician. He learned to play drums at age 3 and competed in musical competitions for steel guitar at age 6. He had many supporters in his family…his uncle Roy helped him hone his skill and his uncle Marion encouraged him to follow his dreams. Stevey taught himself to play guitar and was in band in high school. He was also a DJ for WTMB while in school and he also pursued the DJ title for WCOW and other stations later. Following his graduation from high school, he was called to Nashville, TN where he would perform and tour with Trilly Cole among other famed artists of the 70s country music.

His musical journey that would take him around the United States would start there. He was honored to have played with some of the greatest local bands including….Zone, North Stars, Trilly Cole, Texxas, Me and the Boys, Bittersweet, NIGHT TRAIN, Drifters, Maggie Mae, Ace Novelty Company, Island Jack, Kristi B, Country Legends, Stevey and the B, just to name a few along of course with his one man show with all the latest gadgets to sound like a full band. He developed life long friendships with these musicians and tried to stay in touch. His main forte was country music but he could and did master all genres including classic rock, jazz, and pop.

Stevey always joined in with benefits and school programs to help the communities as well. He was a long time participant of the annual country show with the students of Adams High.

He was known for his musical talents, singing, performing, song-writing, directing, and producing albums starting at a very young age. He had a rare gift of perfect pitch and being able to hear then play back anything. Stevey could pick up any instrument and know how to play it; over 13 instruments were in his repertoire! Stevey always shared his talent and knowledge of the instruments as well and his ideas to make them better to the point of actually becoming the recipient of an endorsement from Heritage guitars. Stevey’s idol was Chet Atkins; and he was lucky enough to have met him! Many of Stevey’s fans and co-musicians call him a legend.

Steve’s other interests were drawing, (talented sketch artist), travel, Star Trek and space, and experiencing different foods which he enjoyed frequent conversations over lunch with his mom. He had a great sense of humor, eagerness to learn, loyalty to friends and family, and he loved high tech. Stevey was also a dedicated dog lover and they loved him too.

Stevey worked and lived in Colorado until 1992 when he returned to the tomah area and met Cari. They married in 1997 and were about to celebrate 25 years in May 2022. She shared his love of music and was his biggest fan. One of their favorite things to do was jump in the mustang convertible and go on a road trip adventure.

He was preceded in death by his father, Ray; his son, Alan Nelson; his father and mother-in-law, Charles and Delores (Krahn) Spooner; his uncle Marion, and his grandmothers, Maria and Rose.

Funeral Services will be held on Tuesday, January 25, 2022, 4:00 p.m. at the Torkelson Funeral Home in Tomah. Visitation will begin at 4:30 p.m. at the funeral home on Tuesday until 7:00 p.m. In lieu of flowers, memorials may be made directly to the family. The Torkelson Funeral Home in Tomah is assisting the family with arrangements. Online condolences may be offered at www.torkelsonfuneralhome.com.

The family asks that if you are feeling ill or have been experiencing symptoms of COVID-19, to kindly express your sympathies through the funeral home website or on Facebook.