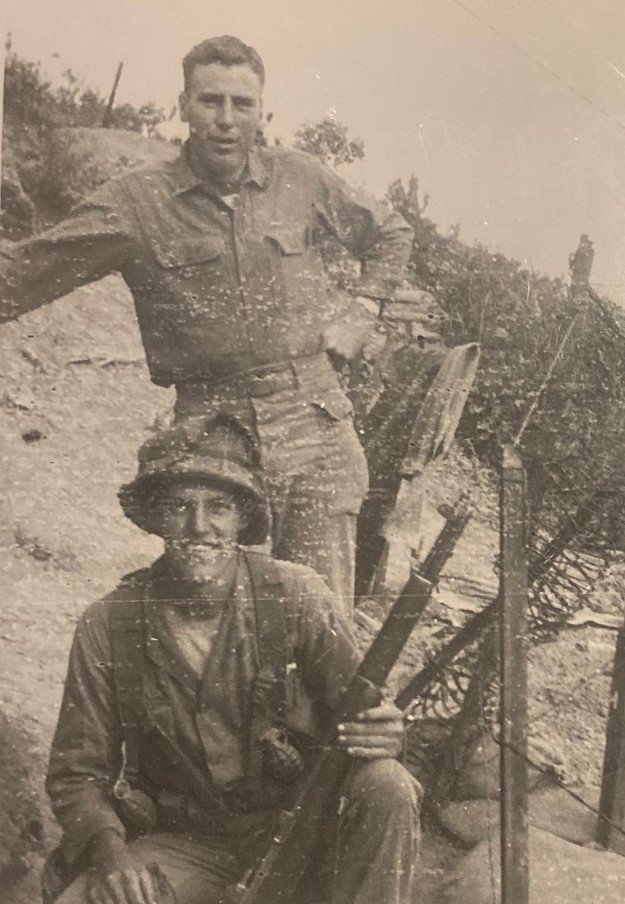 1 A well-worn photograph of Sergeant First Class Don Whitacre (front) preparing for a night patrol on Old Baldy, Korea in 1952. Notice the M-1 rifle and the “pineapple” grenades that Don is carrying. Behind him is the platoon medic Corporal Darrell Bates.
Contributed 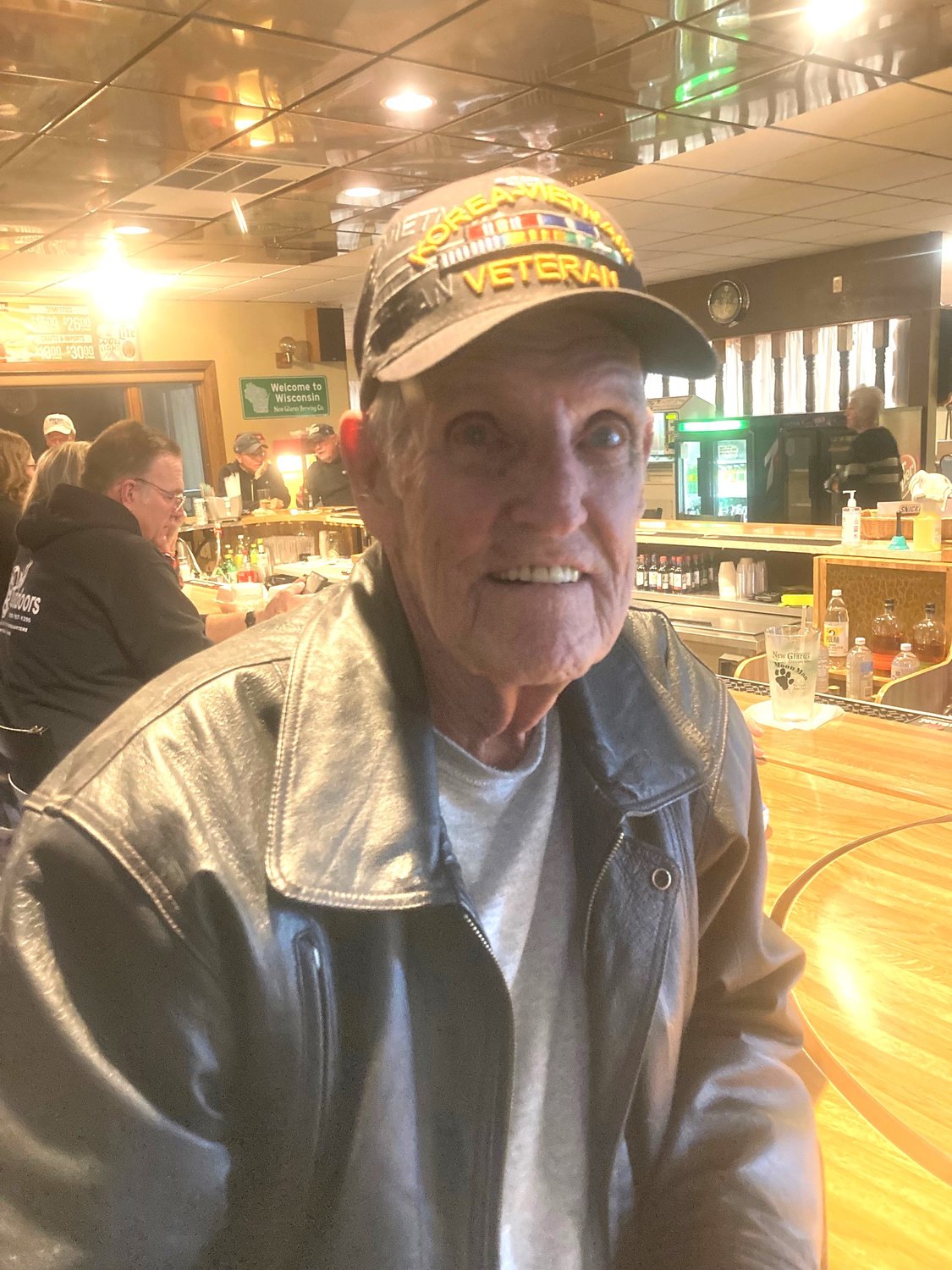 4 At 92 years old, Don Whitacre is no longer working, but enjoying life, by riding motorcycles, shooting sports, participating in veterans’ activities, and enjoying time with his many friends.
John Gessner 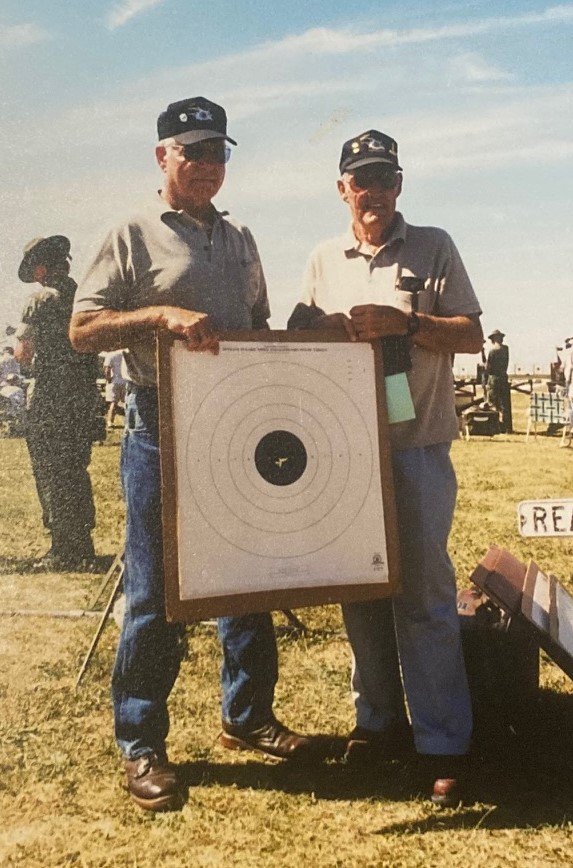 At 72 years old, Don competed in the Camp Perry, Ohio pistol championships. Don (right) and his shooting partner, Herschel Anderson, stand behind Don’s target. The target contains 10 shots fired at rapid succession, at 25 yards by a .22 caliber pistol and all bullseyes.
Contributed 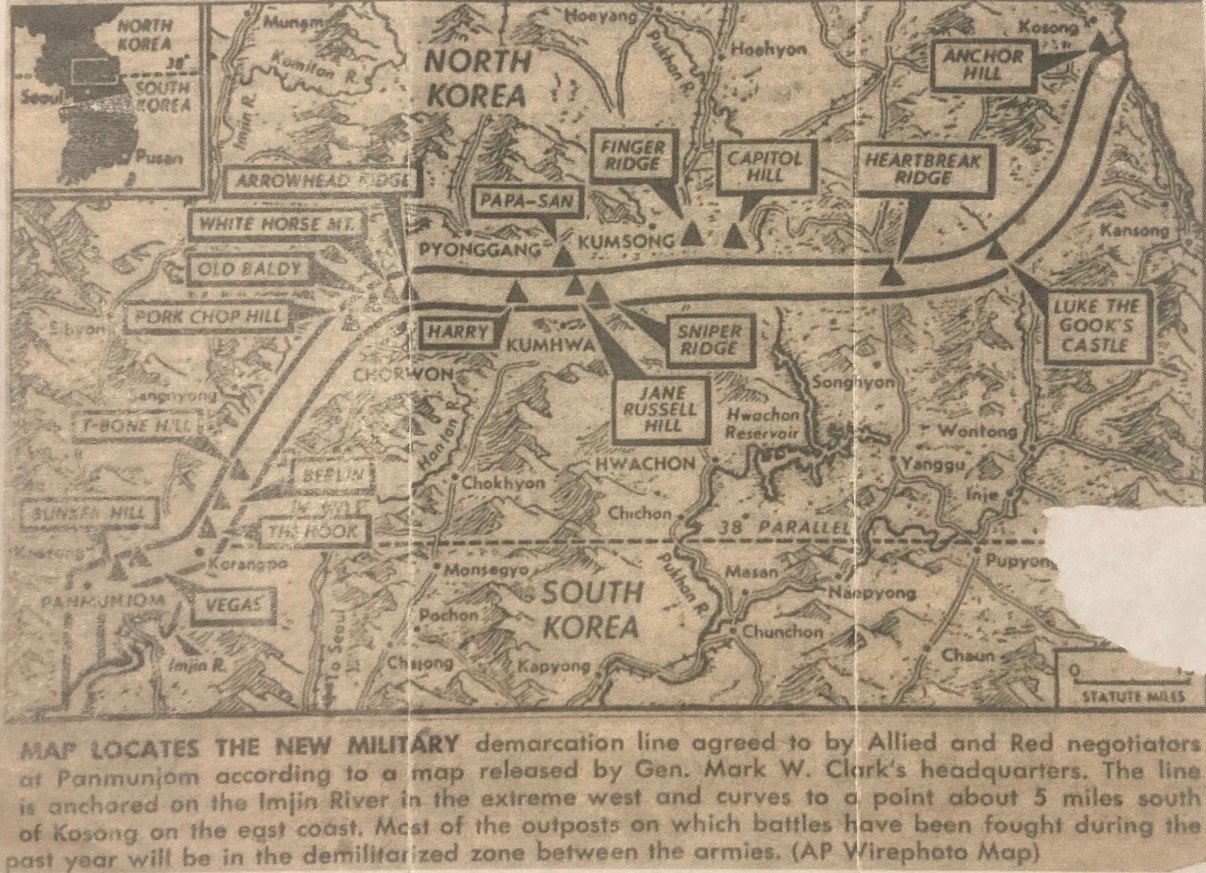 Old Associated Press map of the Korean DMZ demilitarized zone. To the left are Old Baldy and Pork Chop hills. In the center is Jane Mansfield hill. To the right is Heartbreak Ridge, from the Clint Eastwood movie by the same name.
Contributed
Previous Next
Posted Monday, November 21, 2022 12:00 am
John Gessner

Korea, 1952; the war had been going on for two years. It would be another year before a truce was hammered out. Meanwhile, the troops on the frontline waged a see-saw war, taking ground and giving up ground. That is where Don Whitacre was, witnessing everything firsthand. Whitacre was originally from Ohio, but he would end up in Sparta.

Originally trained as a tanker, when Whitacre showed up in Korea, in 1952, he was immediately “reclassified” as infantry; not by choice or volunteering. Three years in the army had already broken him of the habit of volunteering. Assigned to the 2nd Infantry Division, he was sent immediately to the front lines. As a 22-year-old corporal, he was the “old-man” of the platoon of 44 men and as senior man he was made platoon sergeant.

Making rank, usually a long process during peace times, was fast paced in Korea, as casualty rates escalated in quick form. That was the reason that the newly promoted Corporal Whitacre became Sergeant Whitacre, in a very short time span.

Those young men grew up fast in the Korean War and Whitacre was no exception. Experiences were fast and furious, and soon molded him into a seasoned-combat veteran. At that point in the war, South Korean soldiers were intermixed with the United Nations units, and primarily the American units. One night, Whitacre’s radio clicked. He moved forward to check it out. A South Korean soldier reported movement out front. Whitacre told him to “light it up” and the soldier let loose with several volleys from his M-1 rifle. Soon it was all quiet out front.

When the sun came up in the morning, they moved forward to identify the movement. It turned out that the soldier had “killed” a tree stump. In the night, his eyes were playing tricks on him and the stump had appeared to move.

Not all battles had tree stumps moving in the night. There were fierce battles between North Korean and now Chinese forces. The war had started in 1950, when the north invaded the south. Initially pushed back to the Pusan Perimeter in southeast Korea, the out gunned and out manned Americans and South Koreans held out until reinforcements arrived. General Douglas MacArthur executed a bold move, attacking north of the capital of Seoul, at Inchon Bay, cutting the north’s supply lines and then began attacking from two different directions.

By October 1950, the UN forces had retaken Seoul and pushed the North Koreans all the way up to the Chinese border. It appeared that the war would soon be over before Christmas, until about 500 thousand Chinese forces entered the war.  The UN forces were again pushed south, until an uneasy line was reestablished.  By this time, Whitacre had been promoted again, to Staff Sergeant. Don’s unit moved to a hilltop, named Old Baldy, from June – August 1952. There had been so much artillery and mortar fire that nearly every tree had been blasted away. Old Baldy was a key objective because it dominated terrain in three different directions. Over the course of the war, there were five major offenses to take and retake Old Baldy.

Then Whitacre was off to the famous battle of Pork Chop Hill, from March to July of 1953. The battle was portrayed in a movie of the same name, starring Gregory Peck. For Don, it wasn’t a movie. They went onto Pork Chop Hill with 44 men and came off with 22, a 50% casualty rate. Don himself was wounded, but not to the extent of being pulled off the line. While top officials discussed a ceasefire, Don and his soldiers continued gaining and giving up ground. It was said that one hilltop changed hands 24 times in a 24-hour period.

Whitacre’s unit was involved in several other battles, to include Alligator Draw, named so because the two ridges looked like the mouth of an alligator. Soldiers had a knack for naming things in humorous ways. The next location was Dagmar Hills. Dagmar was one of three outposts, on hills between 800 yards and 1,300 yards in front of the allies’ western line and named for their topographical resemblance to Hollywood starlets of the era. Nearby were outposts Hedy Lamarr, Jane Russell and Marilyn Monroe.

Don left Korea in 1953 and the armistice was signed shortly thereafter. He had been awarded the Bronze Star Medal for valor, the first of his two Combat Infantryman Badges. The combat infantryman's badge is only given to infantry or special forces soldiers, while engaged in combat with a hostile force. Needless to say, they are rare. Don also received a Purple Heart, for wounds received on Pork Chop Hill, or as Don would say, “being in the wrong place at the wrong time.”

After Korea, Don decided to make the army his career. He was one of the youngest Sergeants First Class in the army and returned to what he thought would be Camp Attebury, Indiana but the army had different plans.

Before Whitacre could unpack, he was sent to Fort McCoy, Wisconsin, to serve as a unit First Sergeant. That’s where he met and married his wife, Alice, of 48 years.  She had never left Sparta, but soon learned that the army has very shallow roots.  By the time she was established someplace, it was off to another assignment. Together, they served in Hawaii; Fort Lewis, Washington; Fort Ord, California; Fort Carson, Colorado and Germany.

It was in Hawaii that Don began competitive shooting. He became quite proficient, which would serve him well in the future. Except for a year off, for a tour in Vietnam, Don fired rifle and pistol competitively, in the Army Marksmanship Unit, from 1962 until he retired.

He was awarded the Army Distinguished Pistol Shot medal, in 1964, and the United States Distinguished International Shooter award. He participated in the Pan-America Games, receiving a gold medal for his team competition in 1971.  Over the years, his teams have set 11 world records and he himself has set 5 individual records. His high score for pistol was 2,670, only 10 points below the national record of 2,680 out of 2700. He was the third inductee into the 2,670 club, of which there are only 13 members, as of his retirement in 1972. For two years he held the national .45 caliber pistol indoor record and one year the .22 caliber pistol indoor record.

His highest honor came when he was inducted into the Military Shooting Hall of Fame, at Fort Benning, Georgia in 2004, for pistol shooting. Entry into the hall of fame is only conferred by a vote of your peers, many of whom he shot with and against in competition.

He did have a break from competition shooting, when in 1969, he was off to Vietnam, where he would serve with the famed 101st Airborne Division. Don’s proficiency with rifles earned him a job training snipers. He would travel all over Vietnam with sniper training teams. Eventually he would earn his second combat infantryman’s badge, signified by a star in the wreath. Don retired in 1972, as a Master Sergeant.

Don is 92 now, but his older age hasn’t slowed him down too much. He still rides his motorcycle, albeit trading his two wheeled bike in for a 3-wheeler. He had put 60,000 miles on his previous bike. His interest in motorcycles goes back to the late 1940s, with only two breaks for the Korean and Vietnam wars. His buddy Clayton had an Indian motorcycle, but he had been injured in a crash and couldn’t rotate his wrist to accelerate. Hence, Clayton reworked the bike so that the accelerator was on the left and the brake was on the right. It worked well for him, but it was quite a surprise for Don, when he first tried out the bike. He found out quickly that rather than braking, he accelerated. Today you will see Don around town sporting his favorite hat, “Korea – Vietnam Veteran.” As for shooting, at 92 his friends say that he can still “plug a nickel” at 25 meters with a .45 caliber pistol.  He is one of those ordinary guys who has done some extraordinary things in his life.