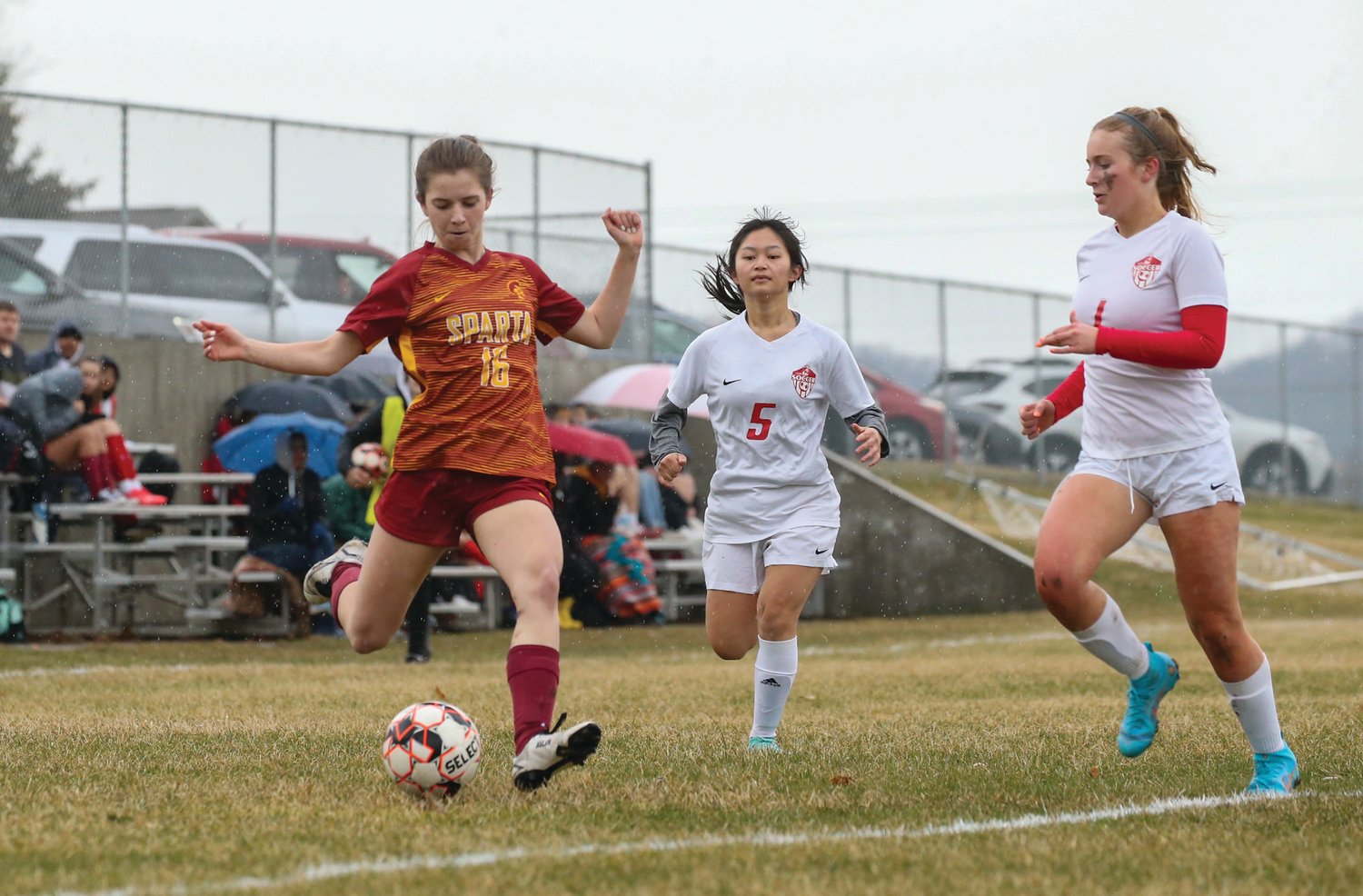 Sparta’s Chloe Allen winds up for a kick that would end up as the Spartans’ first goal against La Crosse Logan Tuesday. Allen scored twice and had a trio of assists in a 10-0 win.
Photo by Nate Beier/GX3 Media
Posted Thursday, April 14, 2022 8:30 pm
By NICK LEONARDELLI, Sports Writer

La Crosse Logan visited Sparta on their home turf Tuesday afternoon with hopes of snagging their first conference win of the year. Sparta had other plans for the Mississippi Valley Conference opener.

Weather, however, delayed the start of the game Tuesday, April 12 by roughly 45 minutes as lightning in the area forced a temporary shutdown. When the teams finally hit the field, the afternoon was overcast and windy with a few sprinkles scattered about.

The home team methodically worked its way to a commanding halftime lead.

Chloe Allen put in the first goal of the night off an assist by Malory Russ, with Russ delivering her first goal less than a minute later as the ball skipped under the goalie from about 15 yards out.

The senior striker finished off a hat trick before the 30-minute mark and Sparta went on to possess a commanding 6-0 lead by halftime. The team only needed 30 more minutes to score four more goals and secure a match-ending 10-0 advantage.

Sparta’s final goal, an Allen to Russ combo, came in the 70th minute to force a premature end to the contest.

Sparta improves to 3-0 with the win and moves ahead with an ever-growing target on its back — something the team will have to get used to if they continue their winning ways.

Head coach Amy Russ wants to see the momentum continue throughout the season.

“I am really looking forward to where we will go this season,” Russ said. “We plan on continuing to support the girls in all of their endeavors as well as continuing to put together meaningful practice plans that prepare the girls as best we can for each new contest.”

The next game for the squad is this Thursday, April 14th. Sparta will visit archrival Tomah for their second conference match of 2022. Tomah enters the matchup 1-1. The start time for the game is set for 4:15 pm.