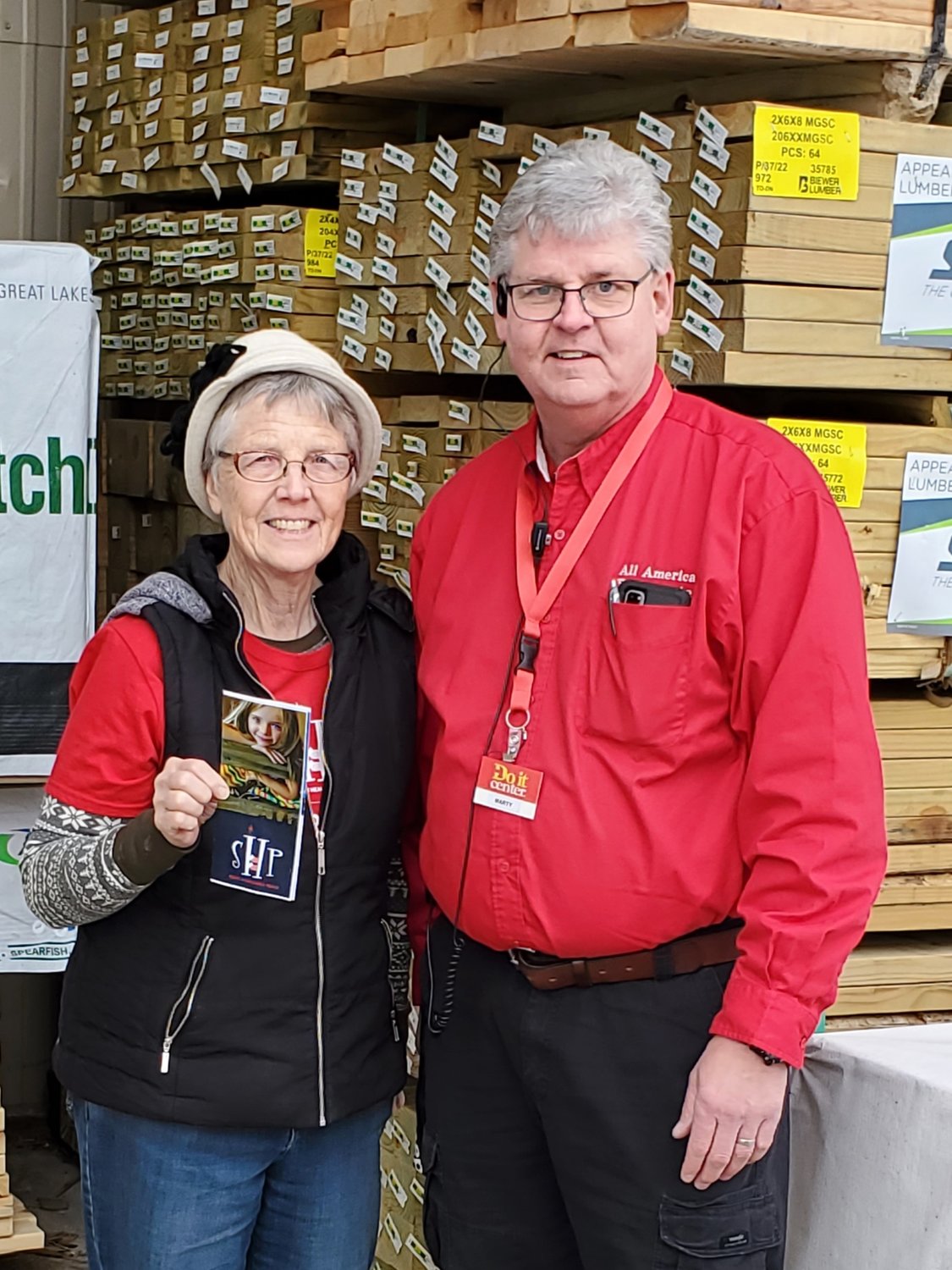 Marty Murphy, General Manager, stands in front of lumber that is being donated to Sleep In Heavenly Peace for the Build Day on February 25th. The Do-It Center is a Platinum Sponsor for the event. Pictured with Murphy is Gwen Nelson, coordinator for the Build Day. Beds for this Build Day will be for children in Monroe County and the surrounding area.
Contributed
Posted Monday, January 23, 2023 12:00 am
By BENNY MAILMAN Editor

Gwen Nelson, of Tomah, is getting the word out about Sleep in Heavenly Peace (SHP), a nonprofit group, based out of Idaho that ensures every kid that needs a bed, gets one. On February 25th there will be a “Build Day,” where beds are made by the nonprofit organization, and Nelson needs donations, to fulfill this heavenly task, no later than February 1st.

It all started in December, of 2012, when founder, Luke Mickelson, built a single bed, for a family, at Christmas time. That was the spark that exploded a powder-keg of goodwill, exposing empathetic hearts across this great nation, who refused to let kids sleep on floors, in chairs or on couches.

Since that single bed was made and delivered, back in 2012, nearly 300 Chapters have sprouted up, across America and into Canada, and they have built and delivered over 100,000 beds. Inspired by this movement, Nelson set the wheels in motion, to bring an SHP Chapter to this area.

Gwen Nelson is getting everything in order, for the “Build Day,” in late February, with the most important and immediate attention being focused on the lumber needed to fulfill her vision for the project, in the forms of donations and actual raw materials. “The All American DO-It Center has generously supplied part of the lumber,” Nelson stated. “I am aiming to get 25-40 beds built, and we now have about half the lumber. We will need to buy the rest, or maybe someone will donate it. It would be good if someone would step up this year for the rest of the lumber, as we can't get many grants because it is too early in the year. We can go to Lowe's (huge corporate sponsor) but would love to keep it local, if we can.”

While Wisconsin has 17 of the now nearly 300 Chapters, Monroe County is not one of them. Gwen Nelson is a current core member of the Vernon County chapter and is spearheading the movement to get a SHP Chapter in Tomah, to represent Monroe County. “This area could use its own [SHP] Chapter,” Nelson said. “There are Chapters all around us: Chippewa Falls, Portage, Vernon County, La Crosse County, and Wisconsin Rapids, but nothing in our area… yet.”

Nelson first heard of the project a couple years ago, when she visited Saint Josephs Ridge, and the Lions Club was holding a “Build Day,” which is the term SHP uses for the total construction of the beds, usually held 4 times a year, by each chapter. Another Rotarian, from Tomah, Deb Reid, had also heard about the project and had somebody speak at one of their meetings. “The Rotary and Lions Club talked it [SHP Build Day] over and decided it was a great cause to get behind,” said Nelson. “So, about this time last year, we moved ahead with our first “Build Day.”

Ask them to build it and they will come

Volunteers were asked to show up for last years build, and they did; by the dozens. “We thought we would have around 40 volunteers and we actually had nearly 100,” Nelson told the Herald. “We had to turn people away, but it was inspiring to see the outpour of support.”

Portage supplied all the wood for the build project last year and then took the remaining lumber back with them, when the angelic effort was finished. They also took all the beds that had been built with them. “I have no idea how many beds stayed in our area,” Nelson stated. “Everything went back to Portage. So, yes - we did a Build Day, but I have still not delivered a single bed yet, to a family. I would like to do that.” Nelson stated that some of the beds may have gone to families in the area, but she was never informed.

Gwen Nelson spoke of sending two people to one of the training sessions, provided by the Head Quarters of SHP. “We can send two people to their [SHP] training and that makes us much less dependent on other groups,” she said. “They will then instruct our new group on the proper techniques and style, as to follow the SHP guidelines.” Nelson went on to say that the classes are held in different parts of the country. Most recently they were held in Florida and Utah. Nelson also speaks of first becoming a satellite Chapter, so they will not incur the heavy cost of all the tools needed to undertake the cyclopean task.

Nelson said that a large area is needed, just for the actual building of the beds. “A lot of space is needed to do build the beds. First, there is all the lumber itself. Then that lumber needs to be cut. After it is cut, it needs to be sanded. Generally, there about 20 to 25 sanders needed, taking up serious space, and a hefty price tag, if you must buy them all. Then there are the stations for marking the drill spots, and then the actual drills themselves. Nearing the finish, headboards and footboards are attached, and the bed assembled. The final process for the beds is that they need to be soaked in a vinegar and steel wool solution, so any bugs in the wood are killed and so that no bugs can go into the wood. Then, the final stamp of SHP… it is quite a process.”

Gwen stated that all families receiving beds are fully vetted, to ensure that no shenanigans are afoot. “We just want to make sure that the hard work we put into making the beds is going to a child that really needs a bed,” Nelson stated. She also iterated that churches are involved, Families First, schools and county nurses are too. The beds come complete with mattresses, pillows, sheeting and blankets. Nelson hopes to have much of these items donated through different churches and organizations.

The first beds in Canada went to three children, whose mother had just escaped domestic violence and although they did find shelter, they had no beds. Nelson says that there is a strong need in Monroe county for SHP, as well.

So far, the Gilbert Brown Foundation has stepped up with a nice donation. Nelson says that more is needed by the February 1st deadline, so that the build, on February 25th, can be a strong success.

For more information, you can contact Gwen Nelson, at 608-372-4439, or email her at gondolagarden@charter.net. You may also contact Diane Huber, at 608-487-4094. You may also go to SHPbeds.org to find out more detailed information on the nonprofit company.