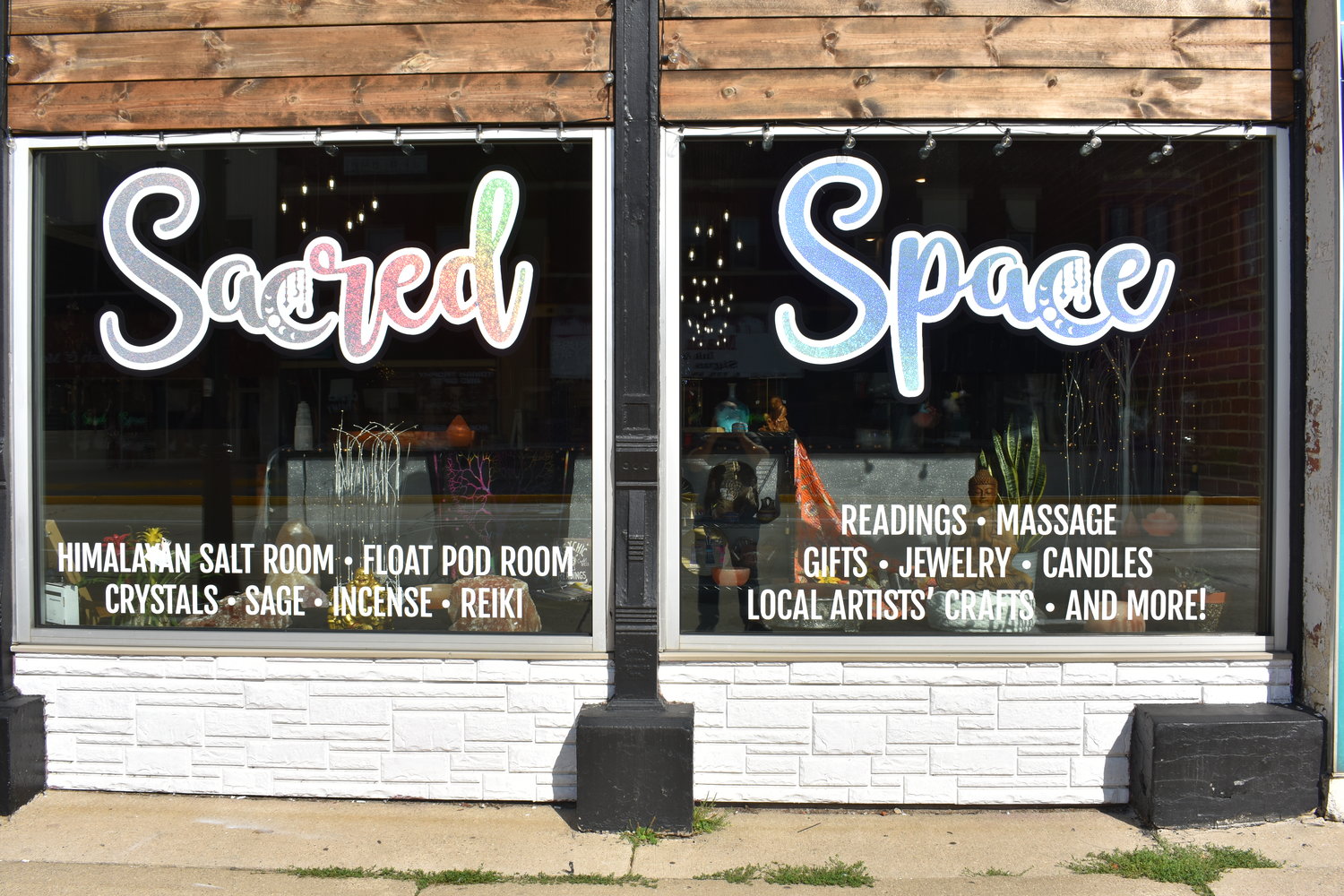 Located at 1104 Superior Avenue, Sacred Space has much to offer in areas of healing, comfort, items for sale and much more.
Benny Mailman 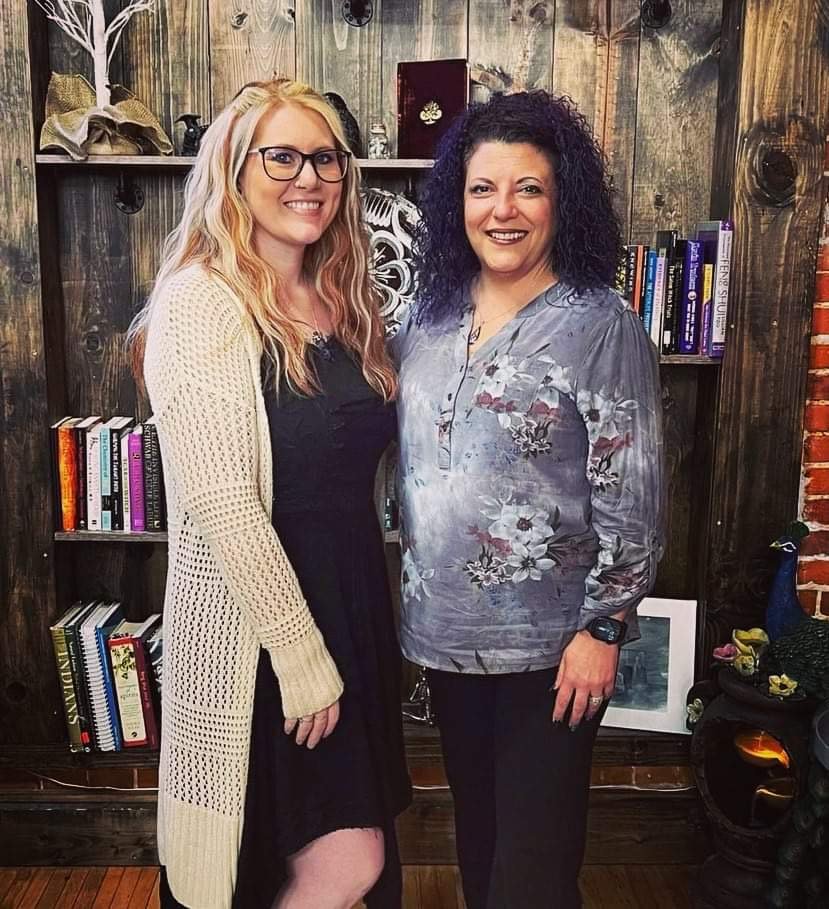 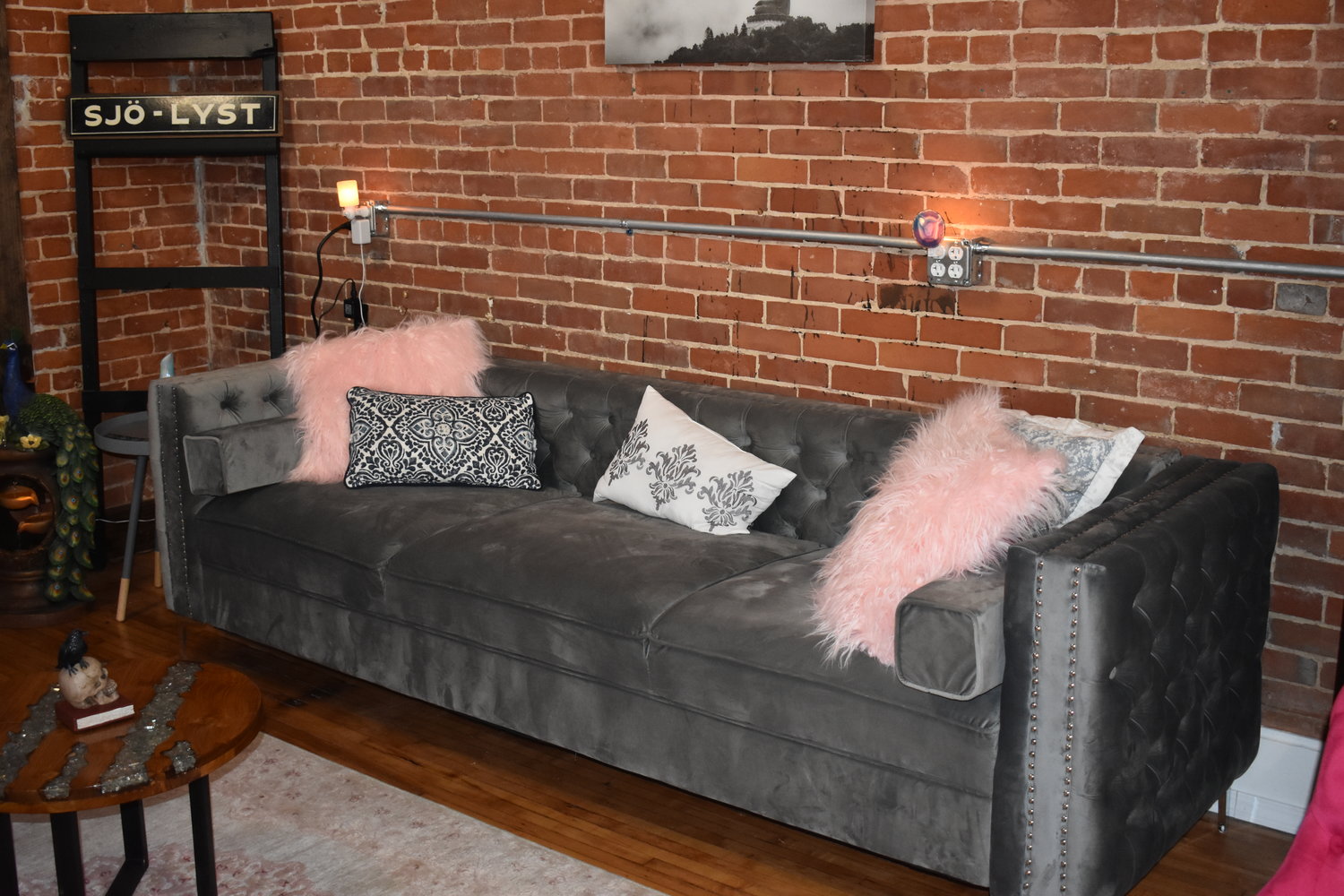 Sacred Space is all about comfort and healing.
Benny Mailman 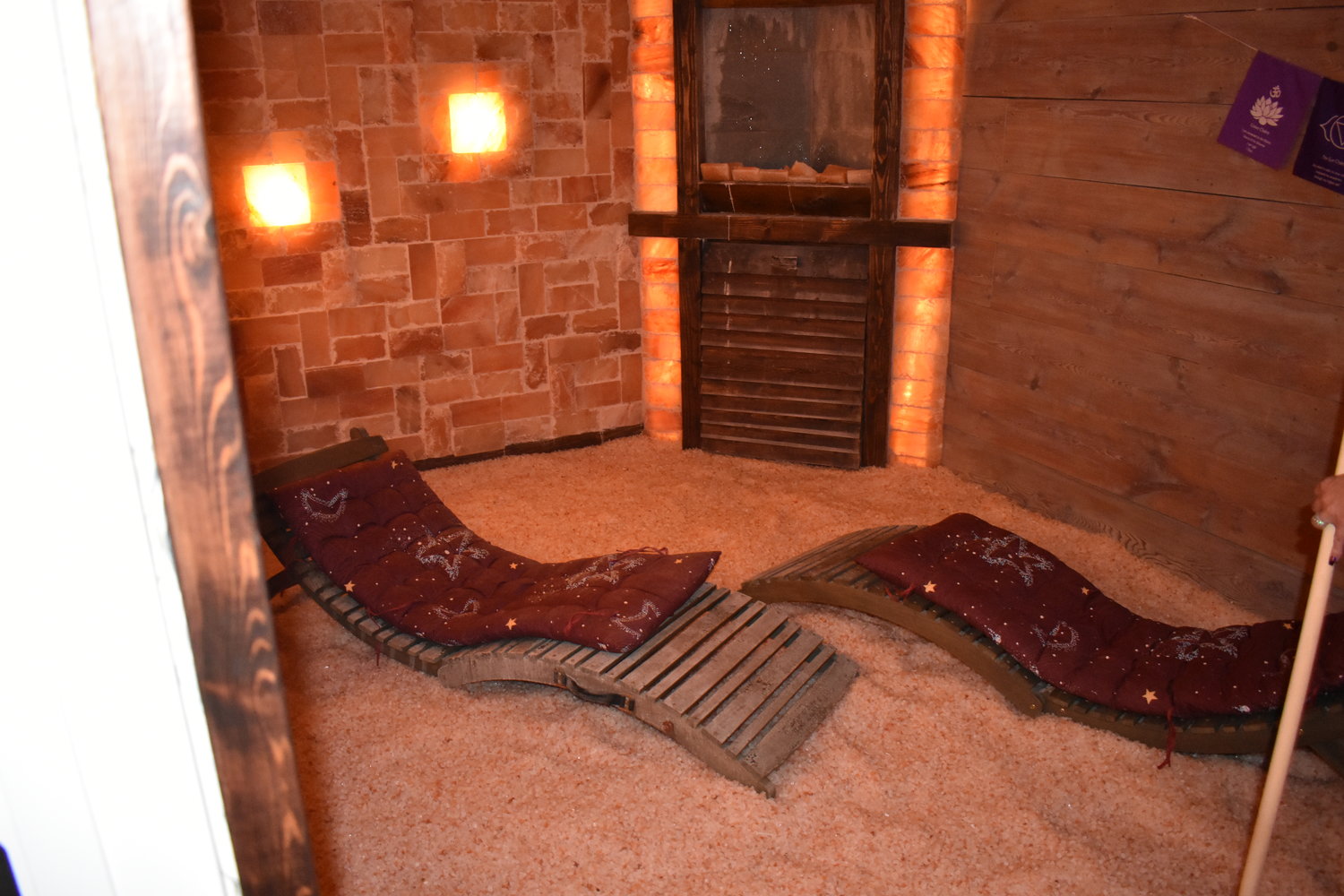 The salt room is 68 degrees, and great for respiratory healing, such as asthma.
Benny Mailman 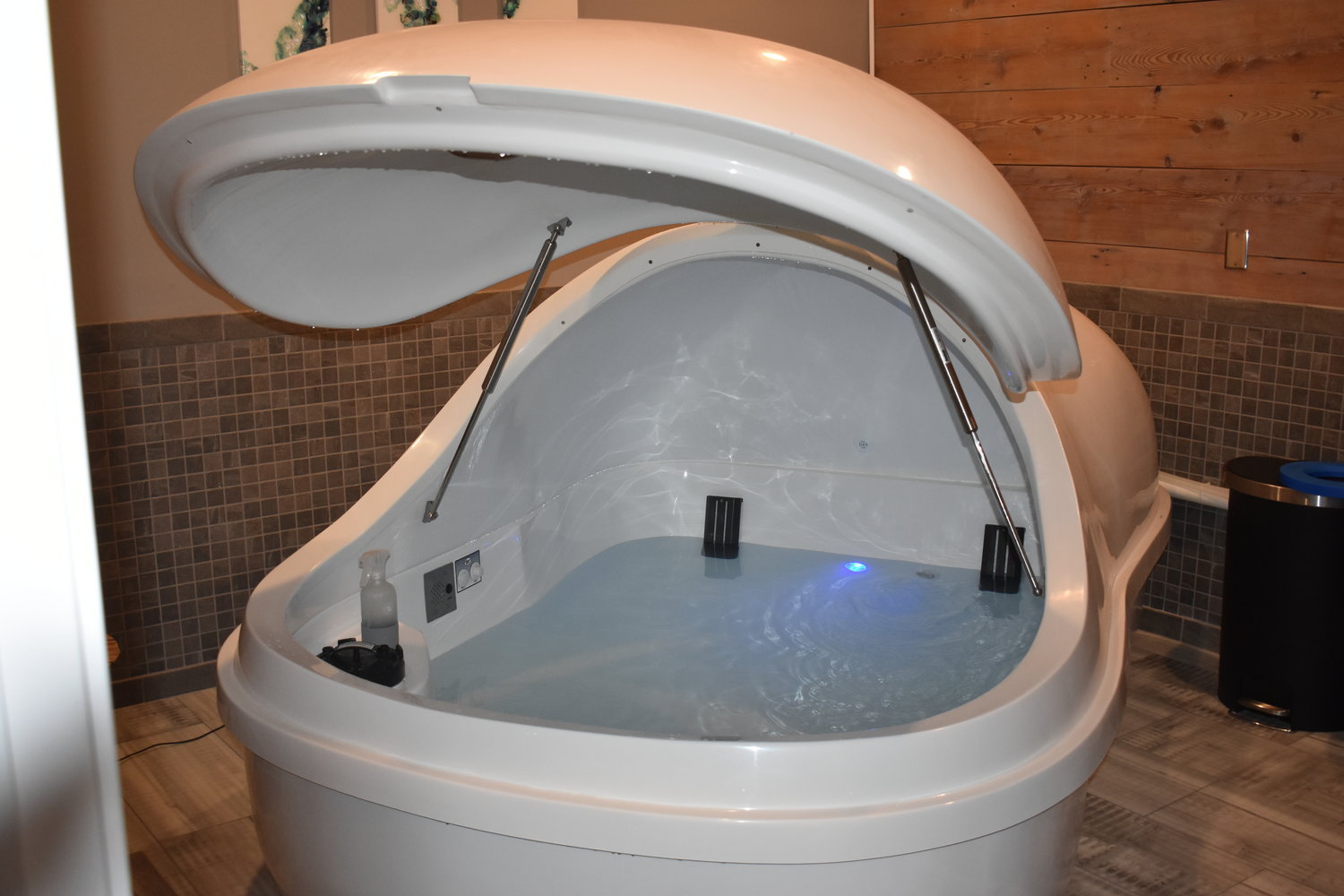 The float pod is a futuristic-looking device. Also known as a sensory deprivation tank, it provides an ultimate calm for both mind and body.
Benny Mailman
Previous Next
Posted Monday, September 12, 2022 12:00 am
By BENNY MAILMAN

Our worlds can seem pretty stressful at times and places to relieve those stresses seem few and far between. In rural environments, people can walk in the woods, or even just observe nature, thus obtaining a sense of connection to calmer aspects of this reality. In urban areas, this calm can be a bit more difficult to locate. Sirens, traffic, school pressures and working frustrations can pile up anxiety and stress in quick fashion. But, if you live in the Tomah area, a new business, Sacred Space, has just opened, and it will bring you in towards those tranquil times you are seeking.

Located at 1104 Superior Avenue, Sacred Space allows for anyone to come in and indulge in many different types of relaxation and stress easement. There is an area referred to as “The Chill” area. This space is set up for calming acts, such as meditation, reading, artistic endeavors, breathing exercises or just a safe place, away from stress bombardment and anxiety assault.

There are also several doors to choose from inside the Chill Area, all leading to rooms that offer the opportunity to reach individual moments of bliss. Behind the first door, one will find the float pod room, while the other doors present the Reiki realm and the Himalayan salt room.

The float pod resembles a massive hot tub, loaded with body-temperature water and 800 pounds of Epsom salt. Often referred to as a “sensory deprivation tank,” the pod deprives the mind of any form of stimulus. Since a person floats, in body temperature water, there is no sense of feeling or touch. The enclosed pod keeps light and sound away, as well. This scenario causes the mind to reach a point of serene solitude and stillness. The float pod is often highly recommended to assist in relief from PTSD, Fibromyalgia, Rheumatoid arthritis and joint/muscle pain. It has also been known to help heal those suffering from trauma. An average float pod time is 45 minutes.

Reiki is an energy healing art, originally developed in Japan. Jessica Shisler is the inhouse Reiki Master. When Shisler showed up to Sacred Space, she instantly wanted to become a permanent member of the team there. So, in addition to becoming the Sacred Space Reiki Master, Shisler also became the store manager. The extra hour that Sacred Space is now open, is due to her willingness to give a bit more time to people seeking the therapeutic energies they offer.

The Himalayan salt room is primarily used to assist people with respiratory problems, such as asthma, or folks suffering from allergies. The temperature is set at 68 degrees, the optimal temperature to assist with these issues. Ann Schliecher, owner of Sacred Space, had gone to Salt Fix Vitality, in La Crosse, Wisconsin, which originally planted the seed for her venture. As she sat with the salt there, resting and gathering her thoughts, Schliecher thought “What if I could do this for others? What if I could offer this calmness and restful mind to other stressed out people in my community?”

[In the note of “It is a small world,” the La Crosse business is owned by Carrie Lehmann Bossinger, a 1990 graduate from Sparta High School.]

Schliecher thought that when she came up with the idea for Sacred Space, she would be the only one pulling the weight of starting a new business. She told her sister, Sadeana Jean, that she had the name already, and Sadeana immediately responded with, “You better get a business plan together right now!” With that advice, Schliecher attained some major guidance from the UW La Crosse Small Business Development and moved forward with her dream. “They were a massive help, honestly, they were the best ay every step,” Schliecher exclaimed.

One of the first major hurdles for Ann was convincing her husband, Jeff, that it was worth starting the new business. “At first he just stared at me, as if I had just declared a World War. We found common interest in rocks and crystals though, and we moved forward from there.”

When they were searching for a building, Schliecher and her husband found the place that they would eventually buy, but it was only for rent. After some negotiation, they were able to buy the property and commence with the construction. Jeff and Ann Schliecher, along with their friends and family, managed most of the minor construction, like trim, doors and smaller projects. They then hired out the major projects, like the salt room and finishing the floors, to major companies. Ann pondered aloud, “Could we have done the floors? Sure, we could have… but someone would have gotten hurt.”

One of the larger “small” projects that Jeff Schliecher, and contractor, Sonny, figured out together, was the building of a giant bookcase, where there was once a large window. The window, as it stood, would have looked in on the clients utilizing the salt room. It was agreed upon that, to not remedy that situation, would lessen the relaxing feeling of those in the salt-room.

When one walks through the front doors of the business today, their eyes have many colorful items to fixate upon. On the walls, many imaginative paintings hang, demanding more than a simple glance… some may even induce a trance. Jessica Shisler’s daughter, Keely, has a mural on the wall as well. An old door served as one artists canvas, proving that there is a life past the ins and outs of door life.

“We offer a lot of what I once had to travel hours to find,” said Schliecher. “Crystals, rocks, sage and even incense are available now, right here in Tomah.” Aside from the difficult-to-find items, she is thrilled to provide a space for creativity and a non-judgmental area to just relax. “Sacred Space offers a positive and inviting atmosphere for anyone who desires such a space. This is a place to be calm and be your true self.”