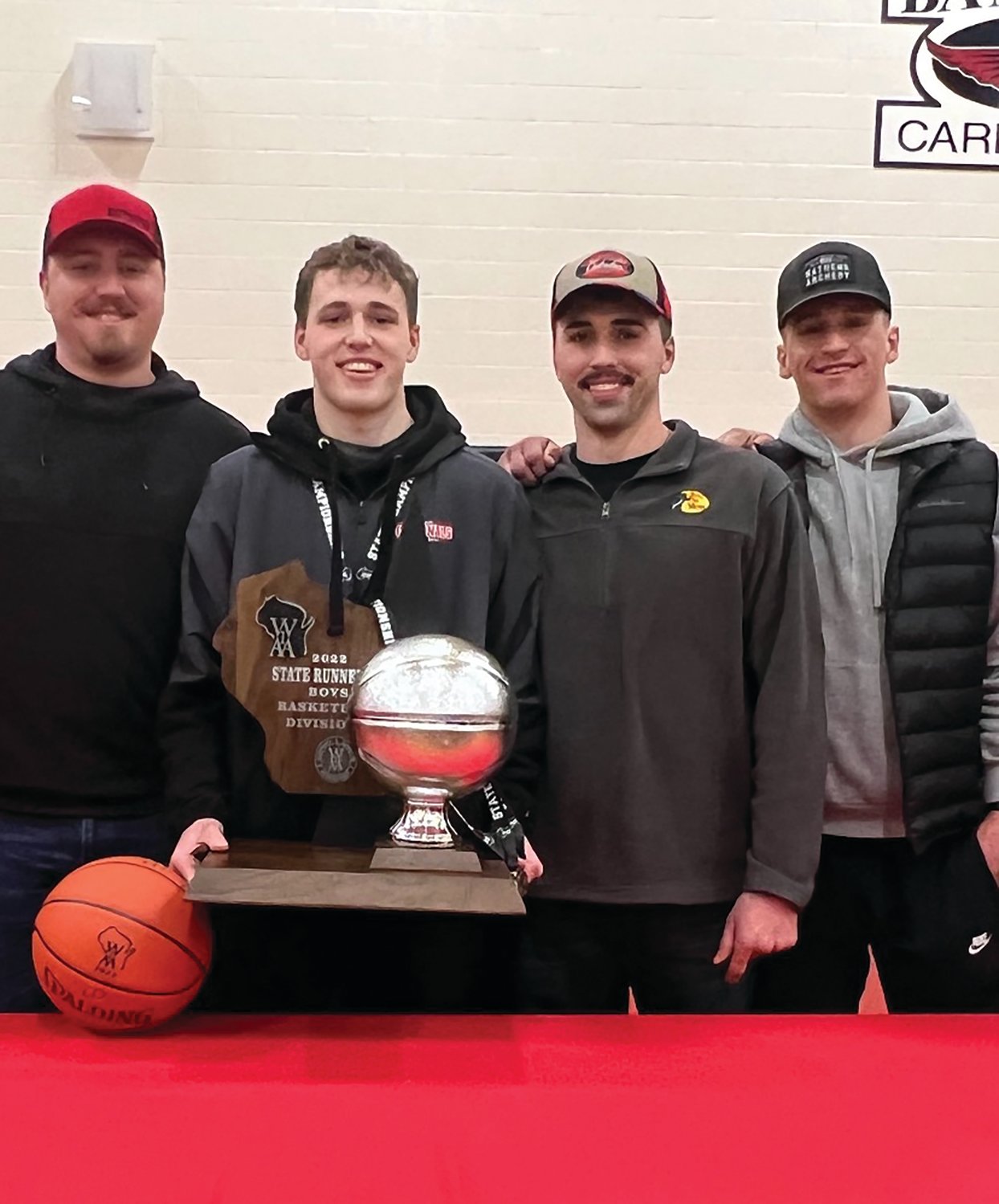 There is no question that we’re currently living in the golden age of Bangor boys’ basketball.

Over a span that’s now nearing a decade, the Cardinals have asserted themselves as the undisputed kings of the Scenic Bluffs Conference while also staking their claim as one of the best Division 5 programs in all of Wisconsin.

A sustained run like Bangor’s is a product of a whole host of contributors over the years, but there has been one particular constant that has served as a thread line woven through each team during this incredible run: the presence of the Reader brothers.

At any given time in the last nine seasons, at least one of the four Reader brothers — Jack, Luke, Hank and Will — have been on the varsity roster for the Cardinals. They’ve all played indispensable roles in this Bangor dynasty, providing all-conference levels of play and invaluable leadership.

“Quite a legacy that Reader family leaves behind,” said Bangor head coach Jacob Pederson, who has been the head coach for the last four years and was an assistant for three years before that. “I think the coolest thing is just the way they embrace each other as brothers. Never really saw them bickering or upset with somebody else when they were doing something. It’s just the way they were as teammates. They’re just great people.”

Their collective contributions over this past decade were all borne out of a lifelong love of basketball, forged from their time growing up competing with one another and their friends. The cohesiveness on so many of those successful Bangor teams is something Hank credited at least in part to all the time so many of them spent together throughout the years.

“We live really close to an outdoor court and we live right around the school area, so all the kids would gather here,” Hank said. “All summer long we’d play pickup games — after 10 a.m. everyone’s there and play until dark.”

Hank also recalled the ample time spent between the brothers playing on their family’s basketball hoop in the garage in helping shape them as players.

“It was always war when you stepped in there. It’s one-on-one with your brothers — someone’s going to be bleeding or crying or Mom and Dad are coming outside to break up the fight or something,” he said. “That was always a great time. I really think the garage is what made all four of us boys so tough — just always beating up on each other and getting after it in the garage.”

This stretch for the Readers began with the 2013-14 season, when Jack broke into the rotation as a sophomore for a Cardinals team that went a perfect 14-0 in Scenic Bluffs play on their way to a conference title. They would repeat that feat the following year, when freshman Luke entered the program.

In both those seasons, Bangor bowed out at home in the regional finals: a 50-48 loss to conference counterpart Hillsboro in 2014 and a 52-51 surprise defeat at the hands of Gilmanton in 2015.

It was during the 2015-16 season — Jack’s senior year — that the Cardinals cleared a major postseason hurdle.

In those playoffs, Bangor won itself a regional title by besting Blair-Taylor 87-85 in the regional finals. The Cardinals then were able to go on the road and pick up a dramatic 63-60 sectional semifinal win over a Hillsboro team that had beaten them twice in the regular season en route to a 14-0 record in Scenic Bluffs play.

Bangor fell heartbreakingly short of a state berth with a 57-55 sectional final loss to Barneveld, but the program still felt like it had made a huge stride in the right direction with their deep postseason run.

“Coming off those two losses, we definitely had a chip on our shoulder and it definitely kinda set the tone for the next few years going forward for how Bangor was going to look basketball-wise,” Jack said.

The Cardinals reclaimed the top spot in the Scenic Bluffs with the 2016-17 campaign — the start of their current streak of six consecutive conference championships — and navigated their way back to the sectional finals for a second straight year. Unfortunately for them, they once again fell just shy of a trip to state with a 60-58 loss to Shullsburg.

The 2017-18 season — Luke’s senior and Hank’s freshman years — saw Bangor clear its next playoff hurdle and go a couple steps further. The senior-laden Cardinals were the most dominant force in Division 5, reaching state for the first time since 1936 and continuing on to capture the program’s first state title.

“To have it all come together in our last season and go out with a win — it’s a nice memory to have as the last memory of high school basketball,” Luke said. “Our whole team — there were a lot of seniors, but also the younger guys — everyone was best friends, basically. We all hung out together, did everything together.”

Luke and Hank had gotten to share that special run together, and Hank and Will would get to share a similar experience a year later.

With Hank a sophomore taking on a much more significant varsity role and Will joining the program as a freshman for the 2018-19 season, Bangor made it back to Madison for state before seeing its bid for a repeat performance ended with a 69-66 loss to Columbus Catholic in the state semifinals.

The Cardinals would suffer a 62-61 sectional semifinal loss to Blair-Taylor in the 2020 playoffs and then went out in the regional finals in 2021 in Hank’s final season after being bumped up to Division 4 due to COVID-19 shrinking the number of teams competing in the postseason.

That set the stage for the 2021-22 campaign, which would be Will’s senior season and mark the final year for any of the brothers with the team.

The Cardinals capped off this Reader era in style, getting back to the Kohl Center and the state championship game with a run that included a 79-74 overtime win over Southwestern in the sectional finals and a 62-54 triumph against Hurley in the state semifinals.

“It meant everything to get back down to Madison. That night in Prairie du Chien against Southwestern, that was just an amazing night,” Will said. “Then to follow it up getting to go down to the Kohl Center and end my career on the Kohl Center court as far as I could go — just to give our school one last thing to remember us by.”

Though Bangor fell a win short of another state championship, the run to Madison was a special experience that the whole Reader family was able to share together in person along the way, with that dramatic state-clinching win over Southwestern in particular standing out.

“Sometimes I had to turn around and stop watching that sectional final game against Southwestern,” Hank said. “I couldn’t even handle anymore; it was so crazy.”

The individual accolades for each were never in short supply. All of them were regulars on all-conference teams, with Hank being named Scenic Bluffs Player of the Year in 2020 and Luke twice earning that honor in 2017 and 2018.

There were honors aplenty to go around for the four brothers, though the two player of the year awards are nice for Luke to have in his back pocket.

“Here and there, especially when they’re mouthing off. Gotta remind them a little bit,” Luke joked when asked if he ever brings it up. “We never mean it seriously. We’re always joking around.”

For all their personal and team success over the years thanks to their play, there was a familiar refrain from all four of the Reader brothers: they hope people mostly remember their time with the program and as representatives of Bangor for the examples they set and what they gave beyond just what you might find in a basketball box score.

They also emphasized that they were just each a piece to the puzzle in the Cardinals’ run of success, which is undoubtedly true. The team is still set up for success for next season and beyond.

But when basketball returns in the fall of 2022, there’s no denying that it will be strange for Bangor to take the court without at least one Reader brother on the roster.

“It’ll definitely be a little bit weird, a little bit sad, probably, but happy for those guys at the same time for just being the people they are and how easy they were to coach and be with — the time that we had together,” Pederson said. “If they ever want to come back to the gym and help practice or help coach a little bit, we’d be more than happy to have those guys.”