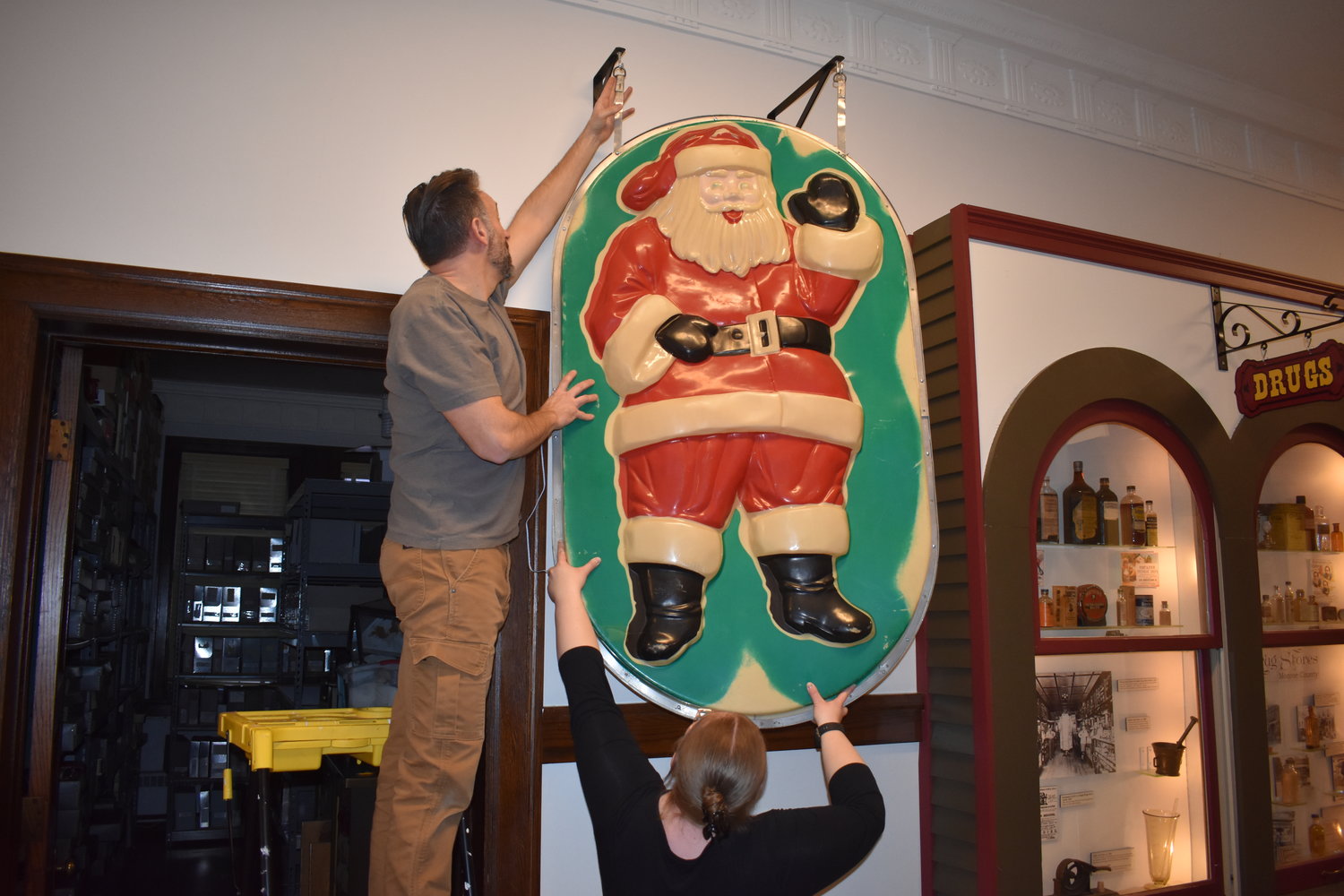 Jarrod Roll and Hannah Scholze hang a Santa holiday light in the entry hall to the History Room, ahead of today’s opening day celebration.
Benny Mailman 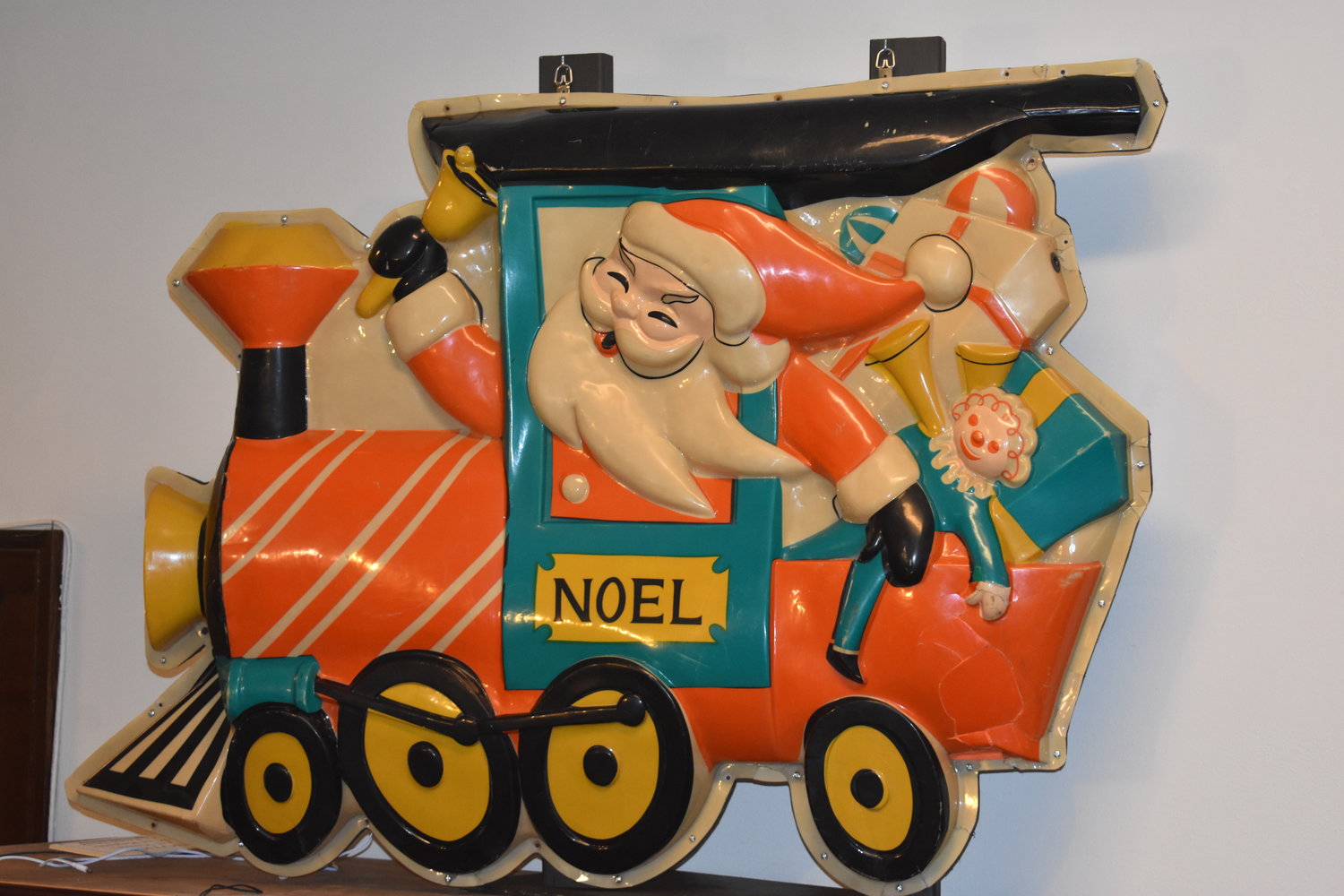 A lot of work went into the restoration of these holiday lights. Jarrod Roll and Hannah Scholze cleaned them up, rewired them and put new light bulbs in them for the display. They just laughed when asked how many hours they put into them all.
Benny Mailman 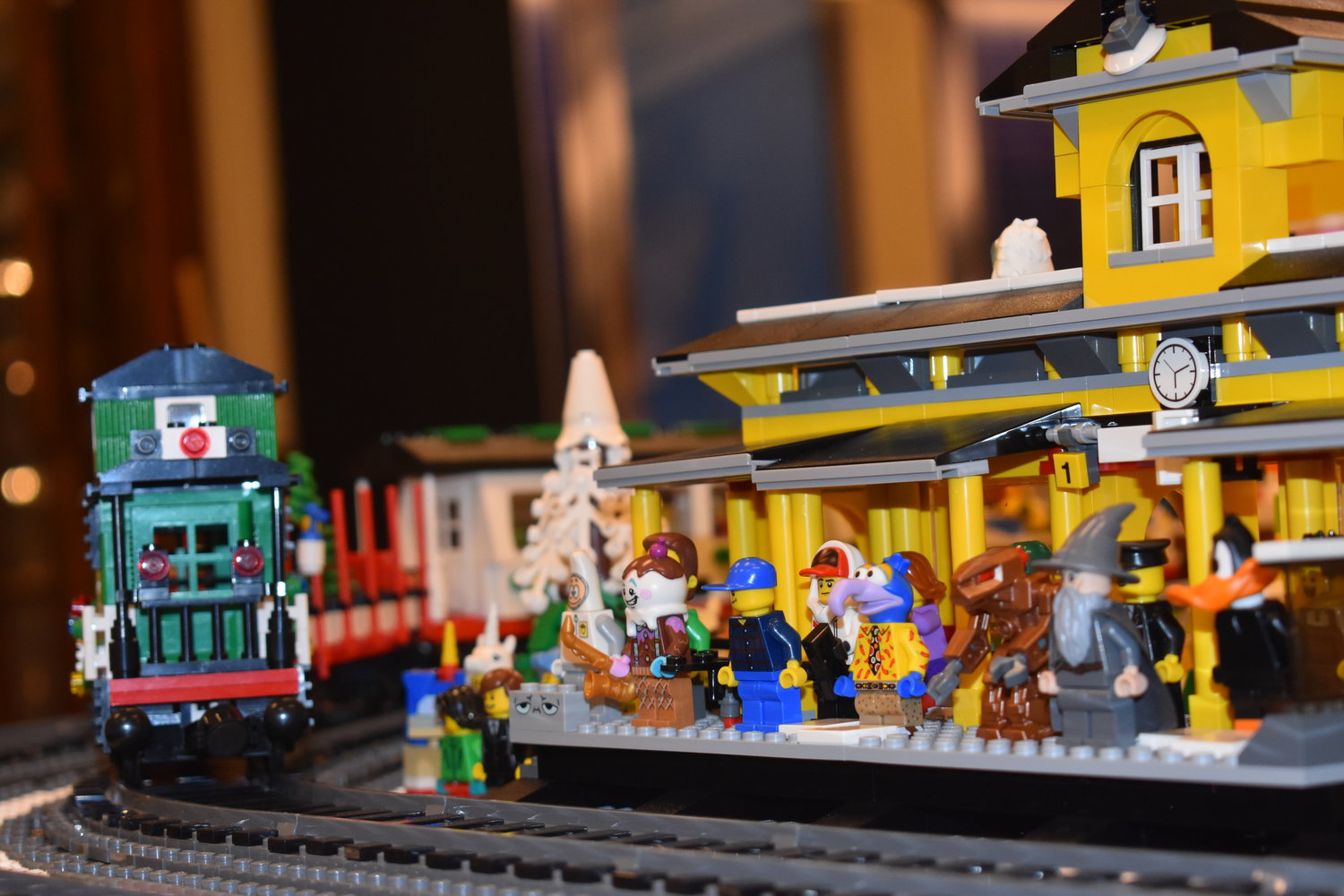 The Lego part of “Lights and LEGO” is a 36-foot LEGO brick holiday scene, complete with train and pop-culture references.
Benny Mailman 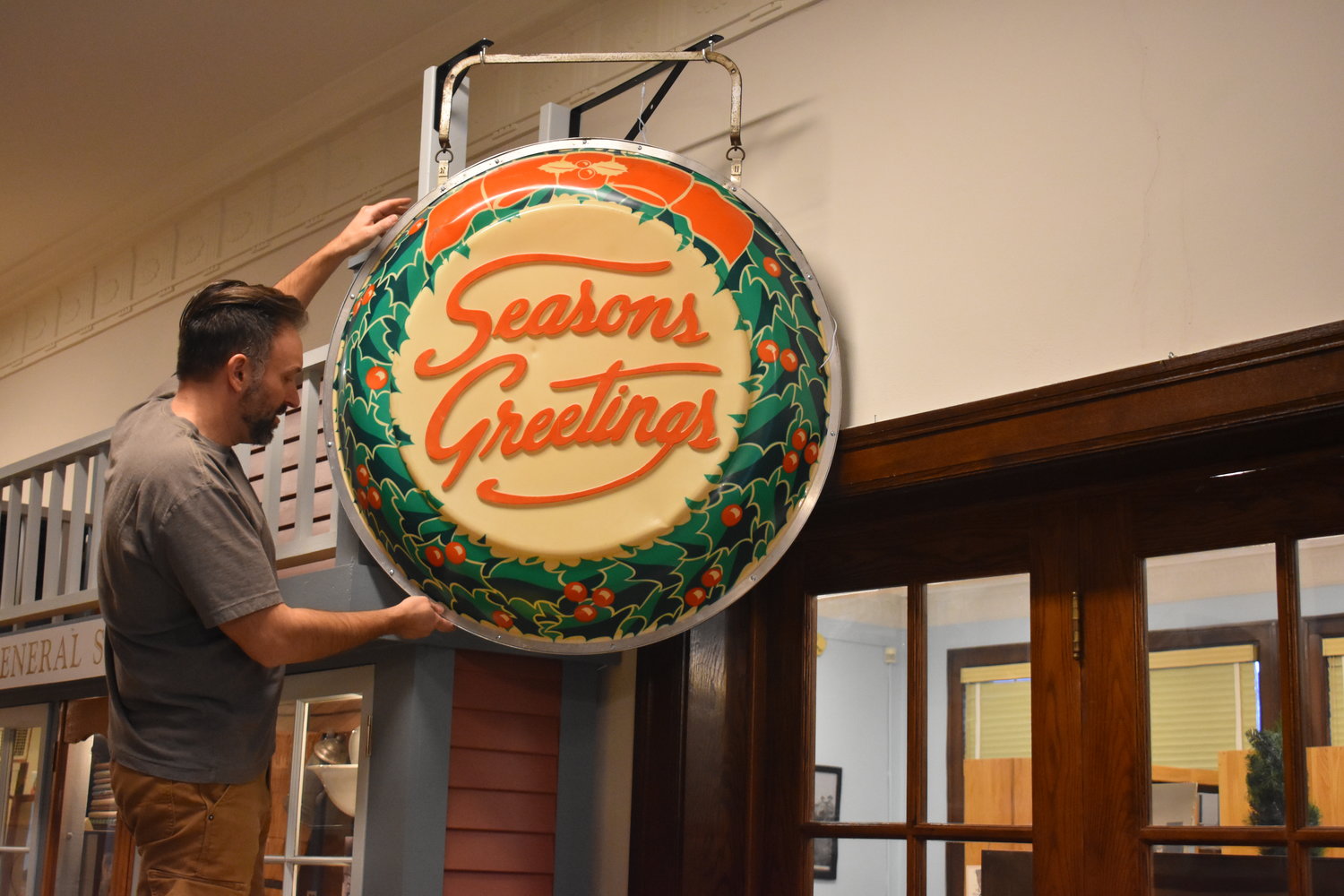 Jarrod Roll hangs a holiday sign that once hung on Superior Avenue, in Tomah, Wisconsin. The signs were visual announcements for the holiday season, from 1955 to 1971.
Benny Mailman
Previous Next
Posted Monday, November 21, 2022 12:00 am
By BENNY MAILMAN Editor

As the holiday season approaches, there are visual announcements that pique our holiday endorphins, swirling them into a crescendo that peaks in the waning days of December. For many, it may be a Thanksgiving Day parade that sets it all into motion. It could also be Christmas carolers, Santa at an event, the Salvation Army ringing bells for donations, the lighting of public Christmas trees, ginger bread houses, or even wrapped presents under a Christmas tree; the list is long. The History Room in Sparta is on that list now, having, for the last 8 years, put up a different holiday display that matches the hopes and surprise of receiving a perfectly-wrapped gift at Grandma and Grandpas, on Christmas morning, for an entire community.

The History Room in Sparta is well known for having holiday displays, reminding folks about past holiday seasons, and what they looked like in a certain time period. This year, the History Room has two displays set up, to start the endorphin gathering. The first display is a colorful, 36 square-foot Christmas Village, made of LEGO bricks, and the other display is of holiday lights, dating back to the 1950s. Officially billed as  “Lights and Legos,” it is sure to fascinate many.

This evening, November 21st, from 6:30 to 8:00, the History Room is kicking off with a small introduction to the festive displays. With the two-display approach, they are hoping to reach a broader demographic. Hannah Scholze, Museum Services Associate, was able to secure a grant, which allows for a 10-week contest to take place during the event. “We know that 10 weeks is a long time for a holiday event,” Scholze stated, “but the end date, of January 28th, is significant for the contest, in that it is National LEGO Day.” Each week, a LEGO set will be given away to a lucky winner, between the ages of 4 and 18. Parents need to be with their children when they enter, and the only requirement is to come in person to enter, at the History Room. There are 10 total sets to be given away.

The other display will be quite a historical one. Back in the mid-1950s, in Tomah, Wisconsin, there were holiday lights set up on Superior Avenue. They were a holiday fixture for folks, until 1971, when they were officially replaced. Following a lead from a phone call, Jarrod Roll, Director of Monroe County Local History Room and Museum, went to look at some signs that had been stored in a barn for decades. They were in rough shape, but Roll could see the vision of the display, and was able to get 11 signs in total. “It was a lot of work on the signs,” Roll said. “First we [Hannah Scholze and Jarrod Roll] took them apart, cleaned them up and rewired them. Then we had to put new light bulbs in each one… it was a bit of a task. Then, for the broken and faded designs, we glued pieces together and tried to match the colors as best we could.” When pressed on how many hours it actually took them to complete the task, both Scholze and Roll started laughing, seeming to not want to admit that to anyone, including themselves.

Jarrod Roll and Hannah Scholze dug deeper into the history of the Tomah lights, finding an actual group of people who knew quite a bit about them. “They said the lights were quite a source of civic pride,” Roll explained. “They were officially listed as ‘Municipal Holiday Decorations’ and strictly sold to municipalities, through a magazine. They were never available in retail stores. Tomah could only afford about 4 a year, with their budget, so each year they would just add a few more. The company, for 10 of the signs on display, was General Plastics, with only one sign made by a company called Vaugn. Tomah had these lights ten years ahead of Sparta.”

Roll and Scholze went on to state that the holiday season is their busiest time for local visitors. “Many grandparents will have their grandkids over Christmas break and wonder ‘What are we going to do?’ and I tell them to come over and enjoy our displays and enter the kids for a chance to win a  LEGO set!”