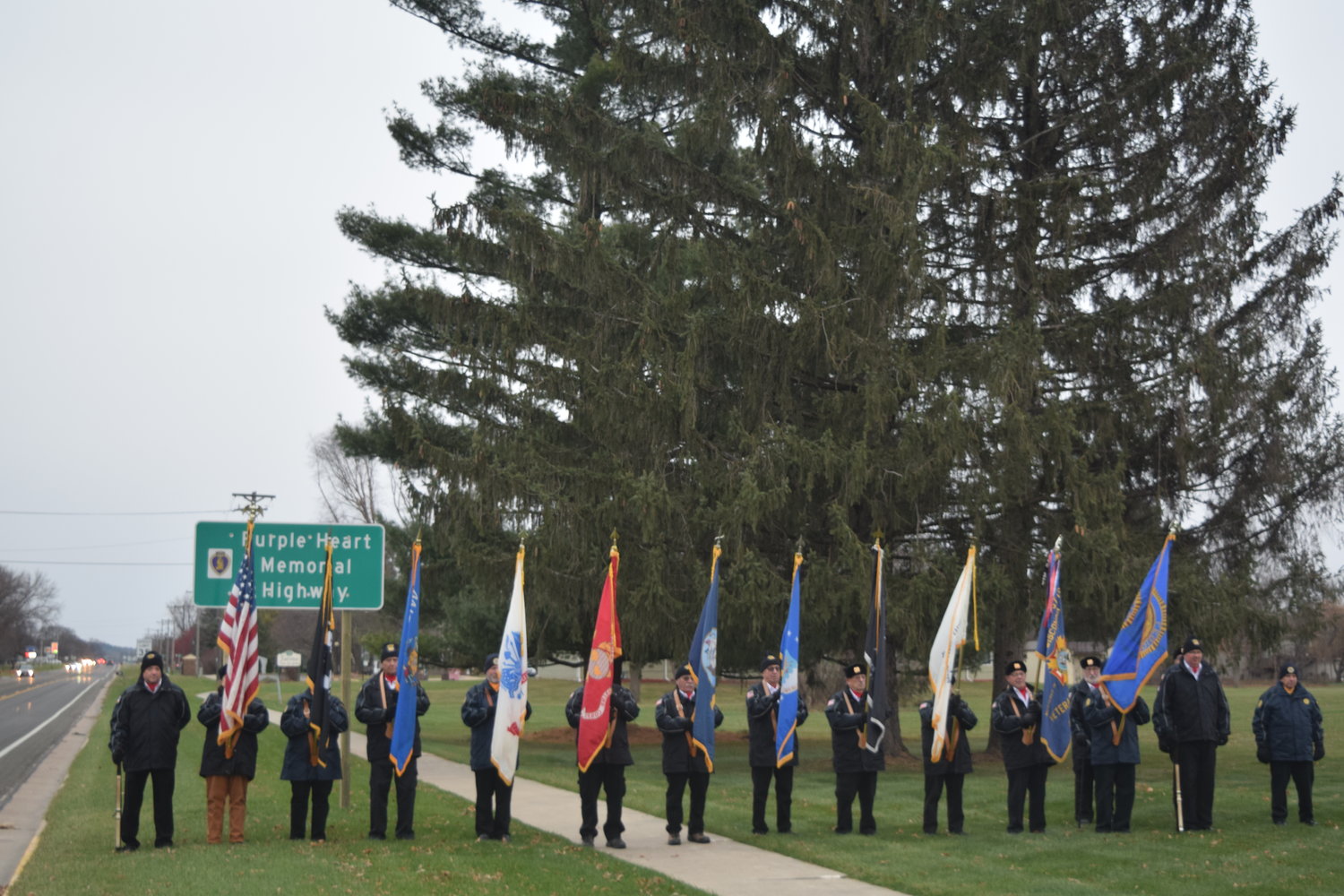 On November 11th, of last year, Governor Tony Evers was in Necedah, Wisconsin, signing Senate Bill 345. This specific bill designated the entire stretch of State Highway 21, as a Purple Heart Highway. The length of the state highway  assigned this honor is roughly 122 miles long, with Oshkosh and Sparta bookending the roads plotted points.

On November 17th of this year, Sparta’s VFW Post 2112 and American Legion Post 100 officially greeted the honor, in true military form. A full color guard was on hand and standing tall, displaying full honors and rendering hand salutes to all who had earned Americas oldest award, for being injured or killed by enemy action.

“The Necedah Veterans, from VFW Post 10231 and American Legion Post 277, were the initiators for this bill, giving a strong push for Highway 21 to serve as a reminder of honor,” said Tom Schauer, VFW Chaplain for Post 2112, in Sparta. “We all supported their efforts and we show our respect and pay tribute to all Purple Heart recipients today, here on our end of the highway.”

Last year, at the signing of the bill, Governor Evers said, “Throughout history, our Purple Heart recipients have put their lives on the line in defense of the liberties we hold dear, so I am glad to sign this bill into law today, designating the entirety of State Highway 21 as a Purple Heart Memorial Highway. I am also proud to take this action on Veterans Day, as we celebrate and recognize our state and nation’s veterans. My hope is that this Purple Heart Memorial Highway serves as a reminder of the incredible sacrifices made by our service members who know the true cost of freedom.”

The earliest Purple Hearts were given out by George Washington, in August of 1782 and were actually called Badges of Military Merit at that time. He only handed out a few, and they were hearts made out of purple cloth, which were sewn on the left breast pocket of the uniform. Washington had wanted common soldiers to be able to get recognized for their service to country; not just officers, aristocrats and generals.

In 1932, US Army Chief of Staff, Douglas MacArthur, renamed the Badge of Military Merit, to the Purple Heart. It was to be awarded to those in the Army (no other branches) for meritorious and valorous service. Any wound that required medical treatment was a byline stipulation of the new medal. In April of 1942, the War Department decided that the Purple Heart could go to any member of service, who was wounded or killed in action. There have been over 2 million Purple Hearts awarded, approximately 430,000 have been awarded posthumously. A United States Marine Corps Staff Sergeant, Albert Ireland, has 9 Purple Hearts, having served in both WWII and the Korean War.