Benefit for Franks family is Jan. 16 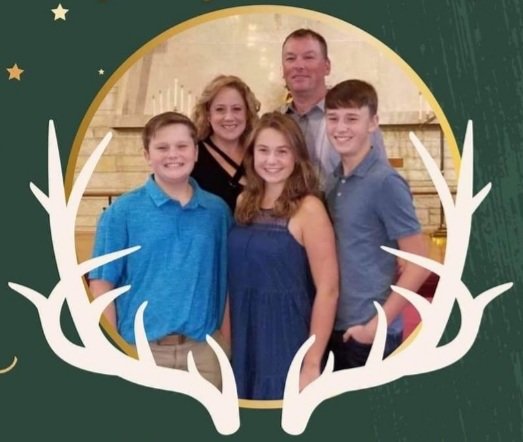 A benefit will be held for the family of Kevin Franks on Jan. 16 in Tomah.
Contributed photo
Posted Monday, January 10, 2022 1:33 pm
By RHONDA HESS, Contributing Writer

After Kevin Franks died Oct. 29, his church family, friends and community members came together to take care of his family.

The 48 year-old from Tomah suffered a long battle with COVID, being hospitalized for several weeks.

He left behind his wife, Amy, and their young children Emma, Bergen and Brede, along with many other family members and friends.

A benefit for the Franks family, organized by Amanda Mallmann and others, will be held Sunday, Jan. 16, from noon until 5 p.m. at Murray’s on Main, downtown Tomah.

“Our church, Good Shepherd Lutheran, along with community members, want to help with medical bills and living expenses,” Mallmann said.

The benefit includes auctions and raffles, some of which are quite extravagant.

At the top of that list is a five-day hunt for six people in South Africa. This $15,000 value prize is being sold in a separate raffle. One hundred tickets are being sold for $100 each for a drawing at 4 p.m. that day. Another high-ticket item is an event donated by Burlap and Bells Wedding Venue with a $6,000 value, which will be auctioned off during a live auction that day. Other prizes include a Matthews crossbow and three different airplane flights (a flying lesson, a lunch and buffet flight, and a photo-opportunity flight).

“We also have a five-course dinner at Murray’s on Main with wine pairings for eight people,” Mallmann said. “And, we have a Green Mountain Daniel Boone pellet grill smoker worth $800, a pair of Pilla Panther X7 shooting/hunting glasses worth $799, a wine tour for 24 people, camping packages, a push lawnmower, ice fishing packages and various baskets. There are so many incredible things donated by the community and throughout the state of Wisconsin.”

There is no entry fee for the event, however, different colored tickets may be purchased throughout the day for the basket raffles and other select items. One ticket sells for $1, six for $5 and 30 tickets for $20.

Separately, plinko and bags games will be played for specific prizes, at $20 for three chances.

There will be 50/50 raffles throughout the day and youth from the schools are offering gift certificates for time and service because they wanted to help their friends in the family.

Members of the Franks family will be raffling off baked goods, as well. “There is something for every single person,” Mallmann said. “We feel so blessed for every donation, every person who has helped organize this event and everyone who comes on January 16th to participate and support the benefit,” she said. To find out more, go to the Franks Family Benefit Facebook page, which can also be accessed through a QR code on posters in the community.

Mallmann said Kevin Franks loved taking his family camping and their nickname was “franksandbeans.” To honor that part of his life, people can contact Mallmann and other organizers through an email – franksandbeans@gmail.com.

Most importantly, Mallmann said, she and the other organizers are hoping as many people as possible turn out for the event to help the Franks.

“We wanted to show Amy and her kids we are all here to support them,” she said.