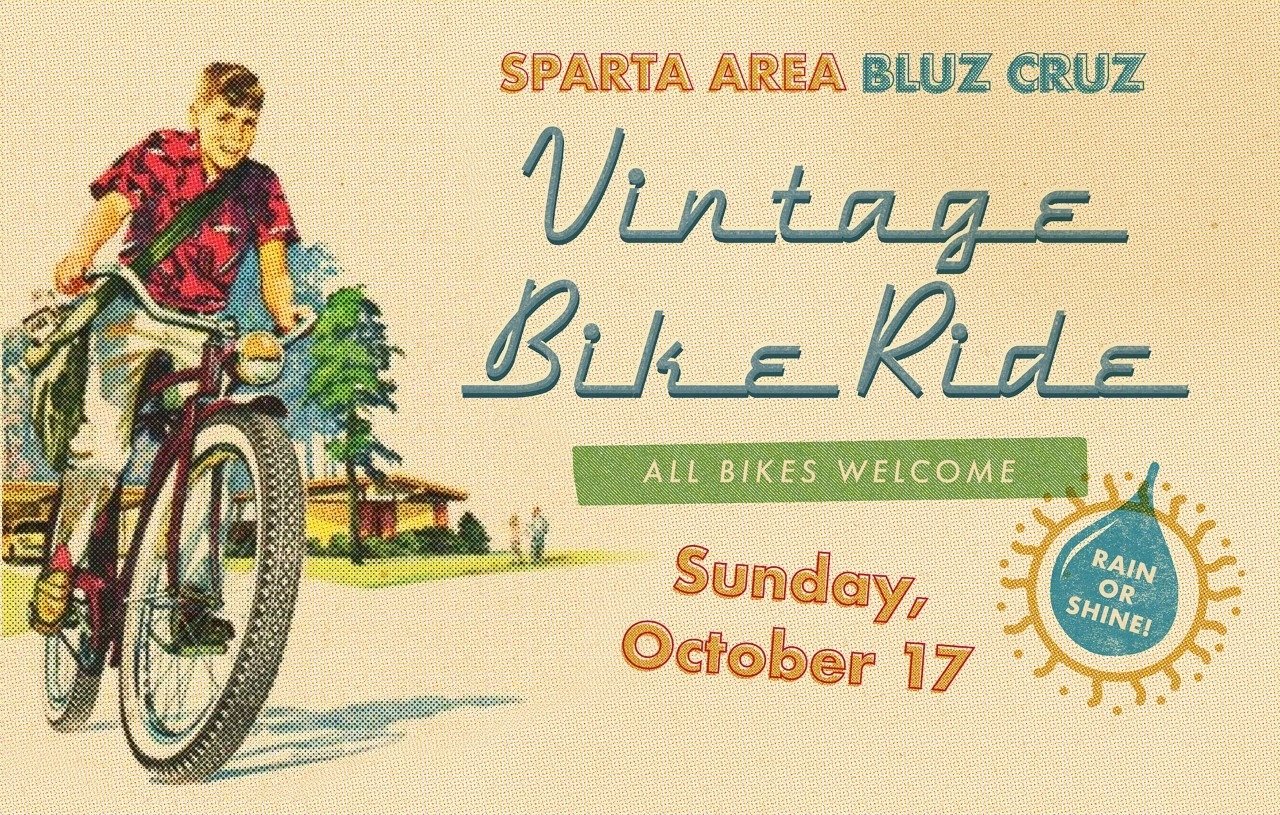 WHERE: Sparta Area Chamber of Commerce

This weekend Fred Green, of Sparta and some friends will be holding the first ever Sparta Area Bluz Cruz for a vintage bike ride on Sunday, October 17.

Blu Martinez is the founder of a Facebook group called Old Bikes Club dedicated to the antique bicycle movement where enthusiasts discuss old bikes that were built from the 1800s to December of 1969.

“They pass along a lot of information about what’s out there,” Green explained. “All of the members post all sorts of great stuff and it’s just a wealth of knowledge.”

Every third Sunday of the month, the group goes on a Bluz Cruz in Colorado with their vintage bicycles. The whole idea inspired Green to host a Bluz Cruz right here in Sparta, the Bicycling Capital of America, which is based on the fact that the first rail bed to be converted to bike trails is between Elroy and Sparta.

“We’re the Bicycling Capital of America. We need to get out and do some biking,” Green said. “It’s the perfect weekend, in the fall, the weather will be nice and mild, and it’ll be a great ride for people.”

Green never considered himself a bike collector yet he has around 11 bicycles at home that he has collected over the years.

The Bluz Cruz is open to anyone with any kind of bike as it is a simple, easy ride; Green is adamant that it is not a race. “Once you get on these cruisers, it’s hard to go fast,” he joked. “It’s just a nice laid-back ride.”

For this weekend’s ride, the group will gather at the Sparta Chamber of Commerce, located at 111 Milwaukee Street, at 10:30 a.m. and depart on the ride at 11 a.m. come rain or shine. The ride will proceed down Water Street to Ben Bikin’, underneath Highway 16 and follow the creek over to Perch Lake and through Sparta Memorial Park.

The group will then ride east along Franklin Street and head south on Court Street for a pit stop at the Deke Slayton Memorial Space and Bike Museum where riders will be able to visit the museum at a special, reduced rate.

“The museum is opening just for this ride, so we’ll spend a little time there,” Green said.

After the museum tour, the riders will continue down to the Beer Shop on the corner of Court and Wisconsin Street where they will conclude their nearly four-mile ride.

“We’ve got to replenish those carbs with an adult beverage,” Green joked.

For those interested in attending, please contact Green at fredgreen16@hotmail.com to pre-register or simply show up the day of the ride.

This ride is a stepping stone to host more bike-related events in the future. With the Sparta group, Green is hoping to eventually host a ride once every month next year and maybe even hold a SWAP meet at some point.

“There’s no ulterior motive here, no raffles, no drawings, no prizes. We just get on our bikes, go for a ride, tour the museum and then go have a beer,” Green said. “It’s not the Tour de France, it's the Tour de Fred."