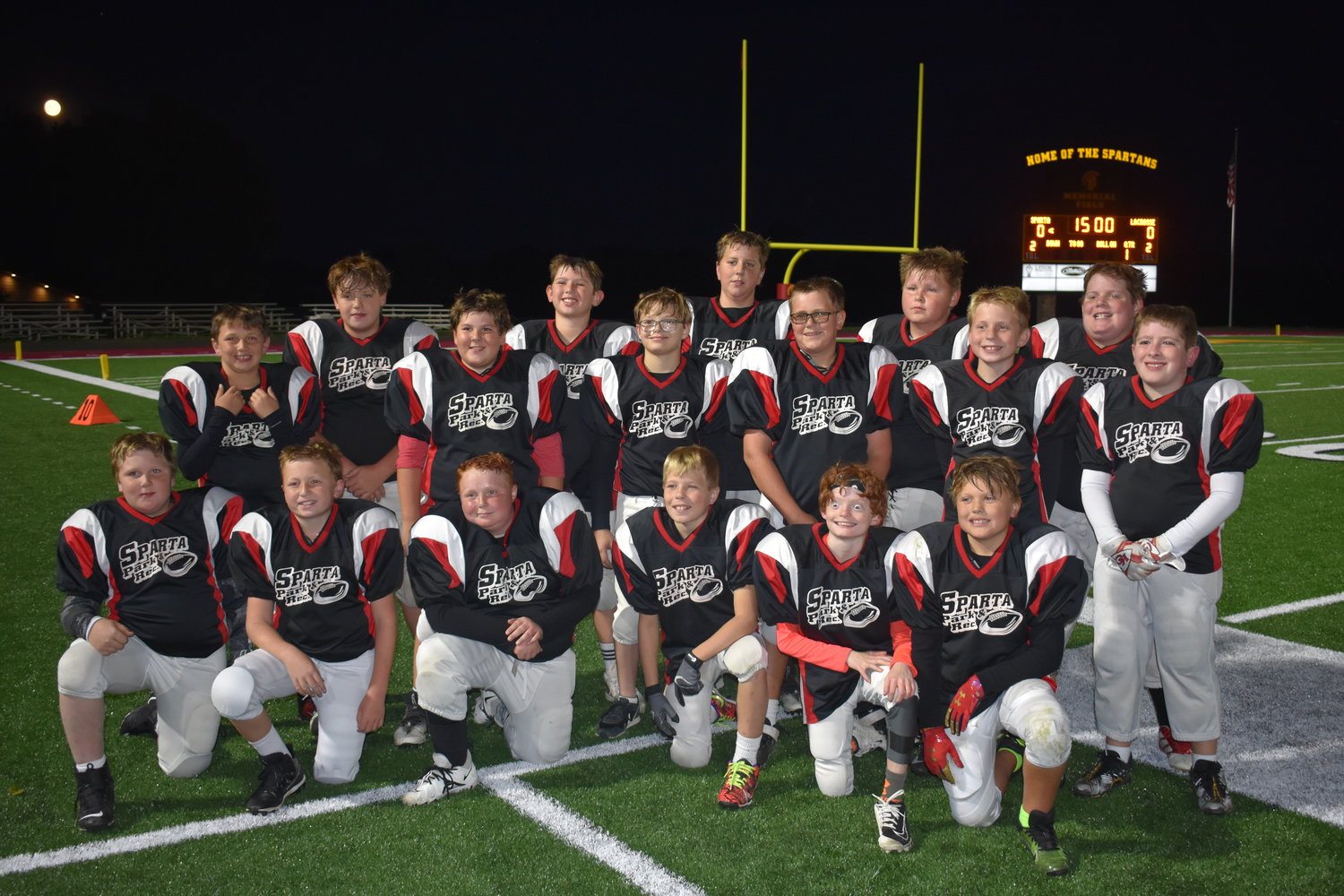 After a pep talk from Coach Caleb Diercks, the fifth grade Park and Rec took a team photo under the direction of Christi Bender. The young warriors initiated themselves as Spartans on the big gridiron, on October 8th, 2022.
Benny Mailman 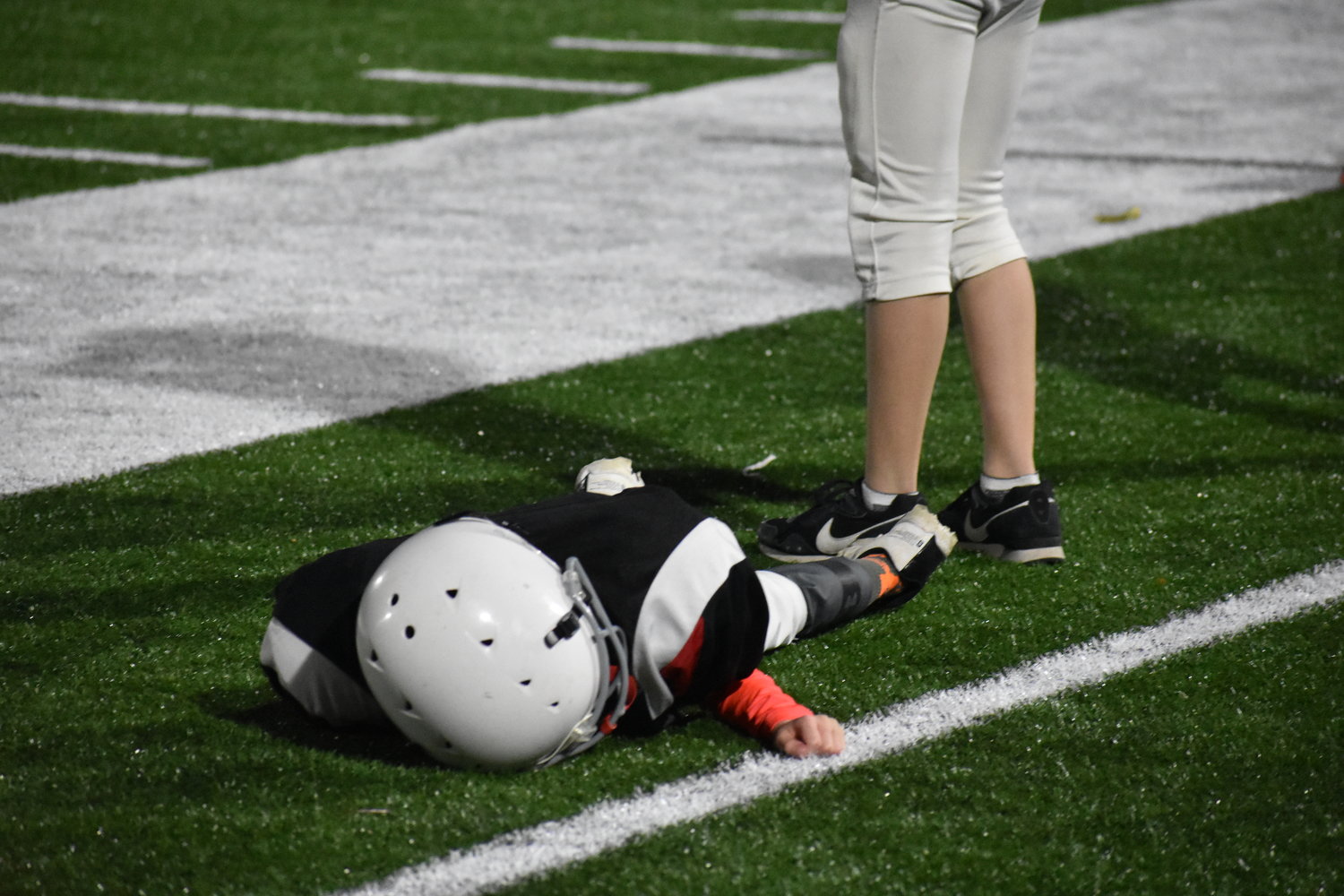 The defeat was too much for this young player, as he fell after the Spartans turned the ball over on downs.
Benny Mailman 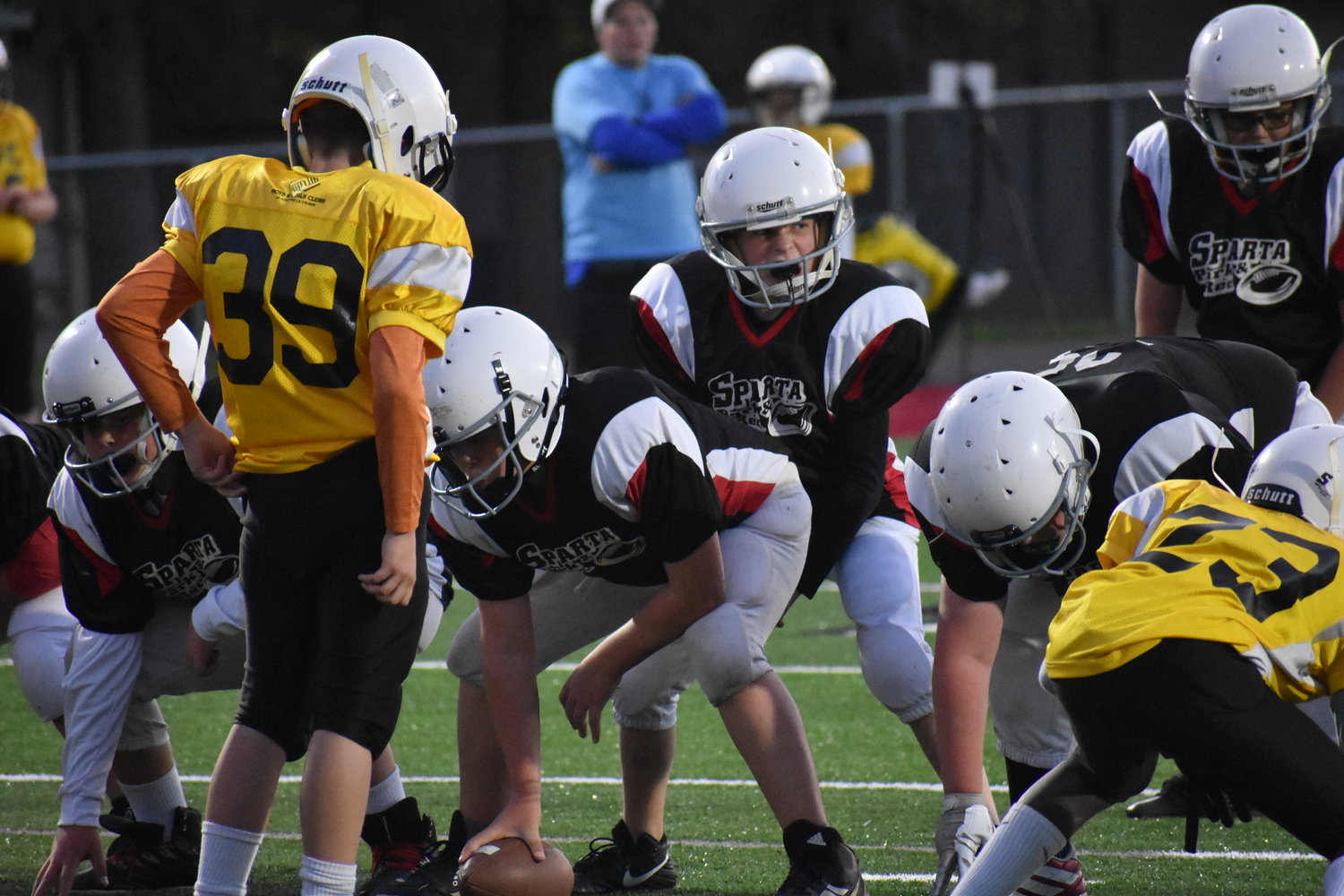 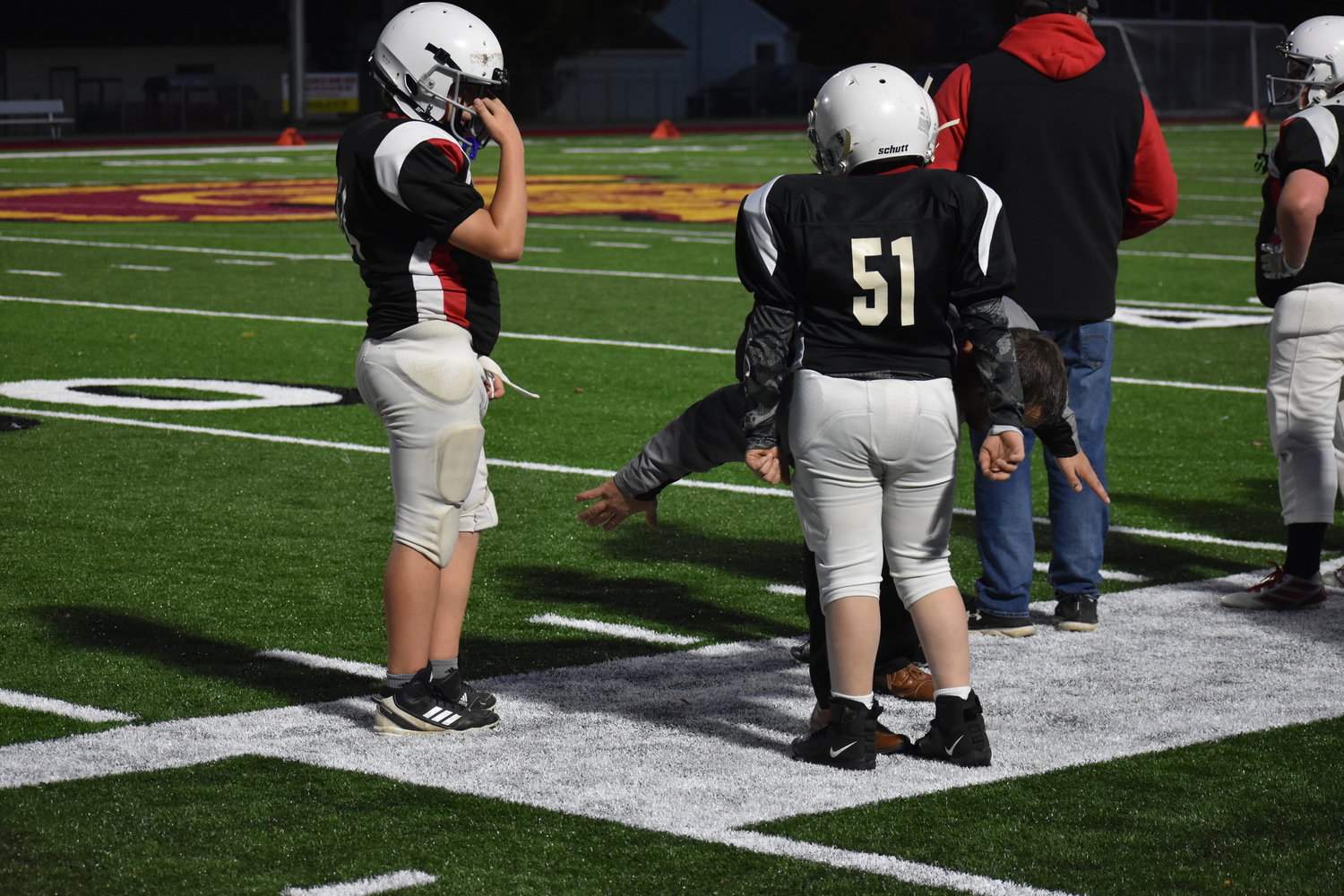 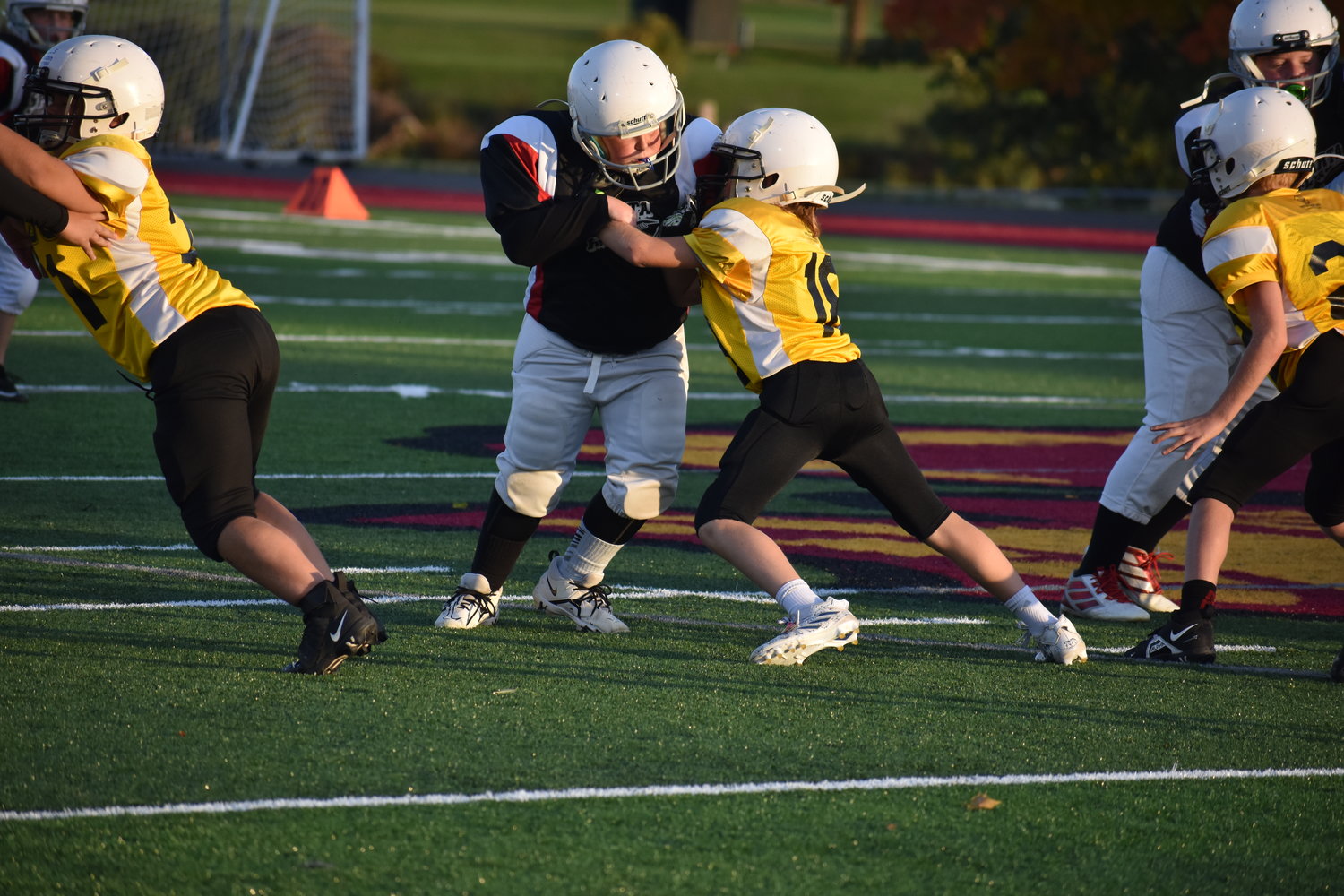 Number 63, Neil Sanders, looks at his opponent and seems to say, “Is that all you got?”
Benny Mailman 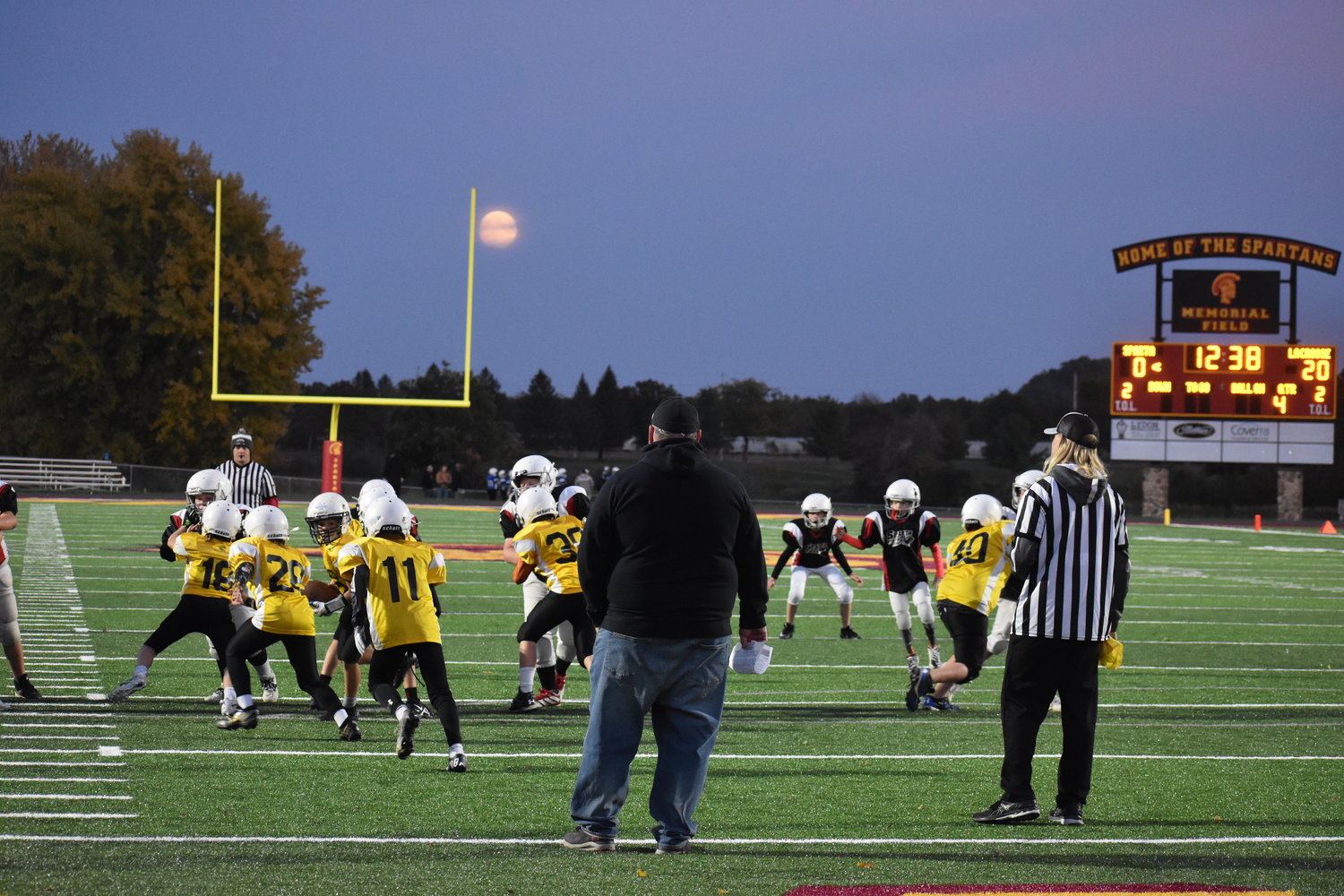 The full moon rises over the gridiron, glowing on the young Spartans, as they are initiated on the field of play.
Benny Mailman
Previous Next
Posted Monday, October 17, 2022 12:00 am
Benny Mailman

Just after 5 p.m., on the 8th of October, the Sparta fifth graders took the gridiron and the big stage: Sparta Stadium. The temperatures were cool for those in the stands, but perfect for the young gladiators on the field. The rules were a bit different from the NFL and arguments arose from rule-clarification issues, but when all was said and done, lessons were learned and the proper steps had been taken to ensure that the boys had a stronger grasp of the American sport that is constantly in the spotlight.

Caleb Diercks, head coach for the fifth-grade team, has been coaching the mighty youngsters for nearly eight years now. “I loved playing sports as a kid and wish I would have played more. By coaching here, I get a chance to get back into it,” Diercks said. Coach Diercks has an all-star cast coaches by his side, in Luke Katt, Pat Watters, Kevin Bach and Torrence Riek.

When on offense, the young quarterback, Landon Williams, would trot over to Coach Diercks, in order to get the next play. A bit of a surprise for attendees was that the young athletes used motion, just like the pros. The intensity of the coaches was only outmatched by that of the young players. They came ready to play, mentally and physically.

When asked if his players watched the NFL, Diercks let out a sigh, and said, “Some of the kids do watch the pros, and they expect to be able to run, jump and compete with that same athleticism. It can be a tough lesson for the fifth graders.” He stated it with a straight face, clarifying that it was indeed a tough realization for the youth.

Coach Diercks said that, in the brief time that they (coaches) work with the first-time footballers, there is a lot of repetition on how to execute plays. “We have them for a short time. We explain the plays to them, then us coaches demonstrate the plays, then the kids follow our lead. It does not happen instantly,” Diercks said. “There is a lot of repetition and explanation for them.”

Coach Diercks went on to explain that the 5th and 6th grade football teams are actually run through the Sparta Park and Rec Department, and not the school system. “We joined with West Salem and went into the La Crosse League, where every game is played at Logan High School. Because Sparta has this new field, we were granted a game, under the lights,” Diercks said. “Usually we travel to La Crosse for every game.”

Another subject that Coach Diercks touched on was the tackling format of these teams. “Most schools have gone to flag football, or tackling bars. We are one of the few leagues that still has tackling at this level,” Diercks stated. He then went on to explain that tackling bars are when players have “noodles” on their shoulder pads, and when they get pulled off, the player is down.

Coach Diercks thought about what he loved most about being the players first introduction to the game, as well as the rules of the game. “Honestly, it is the progression of the kids I love most. Seeing players I have coached, who many times did not even know the difference between a quarterback and a wide receiver, now running full plays and enjoying success at the higher levels, both in middle school and in high school… that makes me smile.”

When the young players had lost the game, they took a knee and listened to Coach Diercks. The full moon rose over Perch Lake, serving as the perfect backdrop for the scene. “I am proud of you all. I do not want to see anyone hanging their heads, you did well and are improving with every game,” Diercks stated with intensity.

In the glow of that full moon, that group of youngsters listened to their coaches. This band of athletes will travel the journey of academia together, while playing a sport that will bind them as brothers, pushing each other to reach their best potential, not just for themselves, but for their fellow footballer brothers. Getting their moment under the lights, on the big field, for the first time, was a moment that will not soon forget; The moment they officially became Spartans as a team.

Kayaking into fall is delight for sight