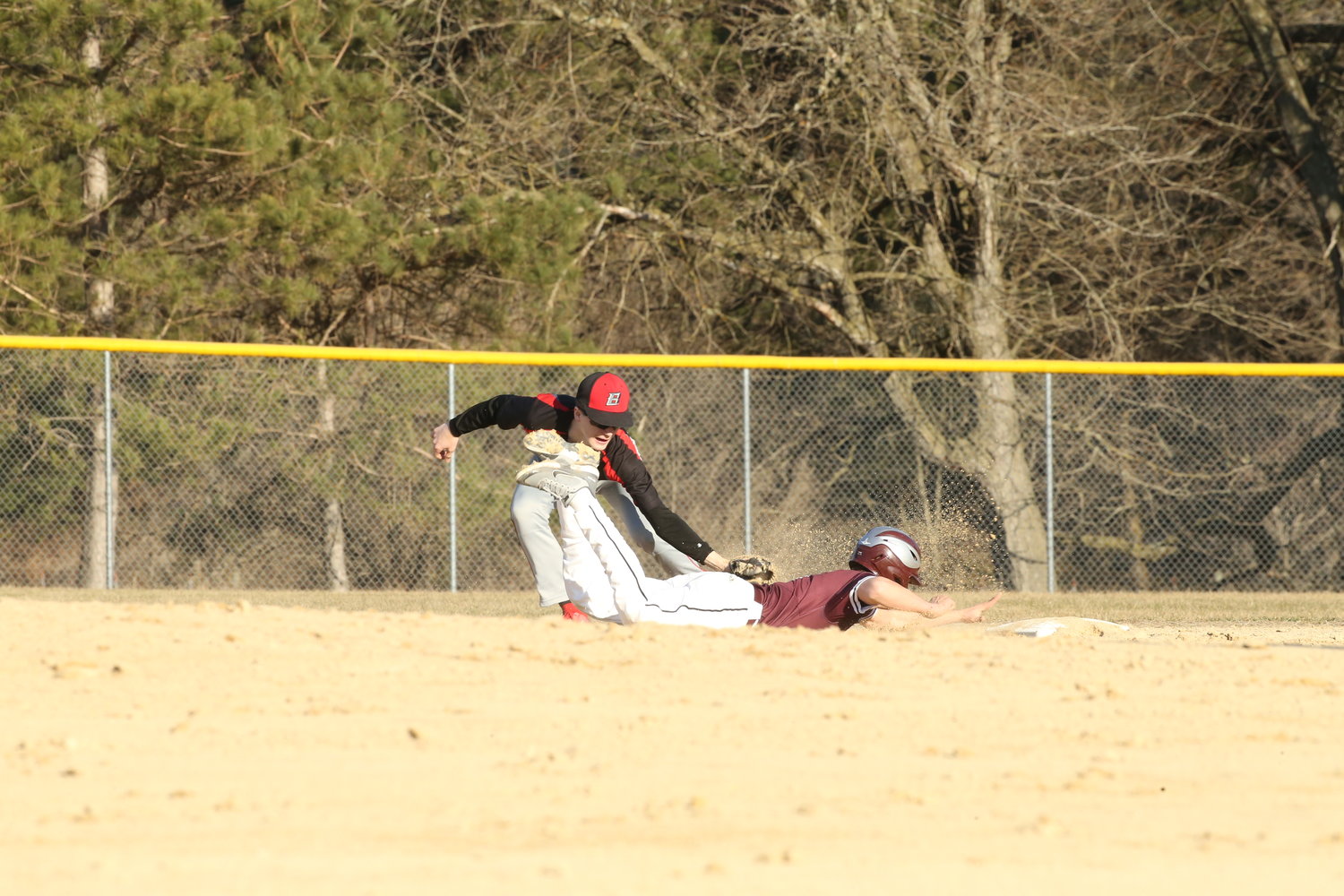 Brookwood’s Brady Hansen lays the tag on Cashton’s Ethan Schmitz before getting back to the bag at second in the fourth inning of Monday’s game.
Photo by Nate Beier/GX3 Media
Posted Friday, April 15, 2022 2:30 pm
By ZACH RASTALL, Sports Writer

The Cashton baseball team was able to pick up their first conference win of the season thanks to a victory against Brookwood. No player had a bigger hand in it than Bowdy Dempsey.

Cashton seized the early 2-0 lead in the top of the first on Dempsey’s RBI triple and Jack Kleba’s RBI groundout that brought Dempsey home. Brookwood cut the deficit in half thanks to Evan Klinkner’s RBI double in the bottom half of the inning, then took a 4-2 lead in the second on RBI singles from Brady Hansen and Evan Wang.

A Henry Brueggen RBI single in the top of the third made it a 4-3 game, but the Falcons responded again in the bottom of the fourth on a two-run double by Franklin Wildes to extend the advantage out to 6-3.

From there, it was all Eagles.

Cashton put together a five-run rally in the top of the fifth on the back of an RBI single from Alec Wall, a two-run single courtesy of Connor Butzler and a two-run double by Dempsey. The Eagles added a couple of insurance runs in the top of the seventh on Dempsey’s RBI single and Henry Brueggen’s RBI groundout, and then set Brookwood down in order in the bottom half of the inning to secure the win.

Dempsey went 3 for 3 with two walks, four RBIs, three runs scored and finished just a homer shy of the cycle. He also pitched the final three innings in relief in scoreless, hitless fashion, striking out six and walking just one along the way.

Elsewhere at the plate for Cashton: Presley Brueggen was 3 for 4 with a walk and three runs, Jacob Huntzicker went 3 for 6 with a double and Butzler finished 2 for 5 with two RBIs and a run scored.

As for the Falcons, Hansen was 2 for 2 with a walk, an RBI and two runs scored while Nate DeWitt went 2 for 4 and scored once.

Brookwood would follow up that game the following night with a 12-1 loss to Wauzeka-Steuben (4-1) in non-conference play Tuesday, April 12 in Wauzeka. The Eagles were scheduled to host De Soto Tuesday evening, but the game was postponed until Tuesday, May 17.