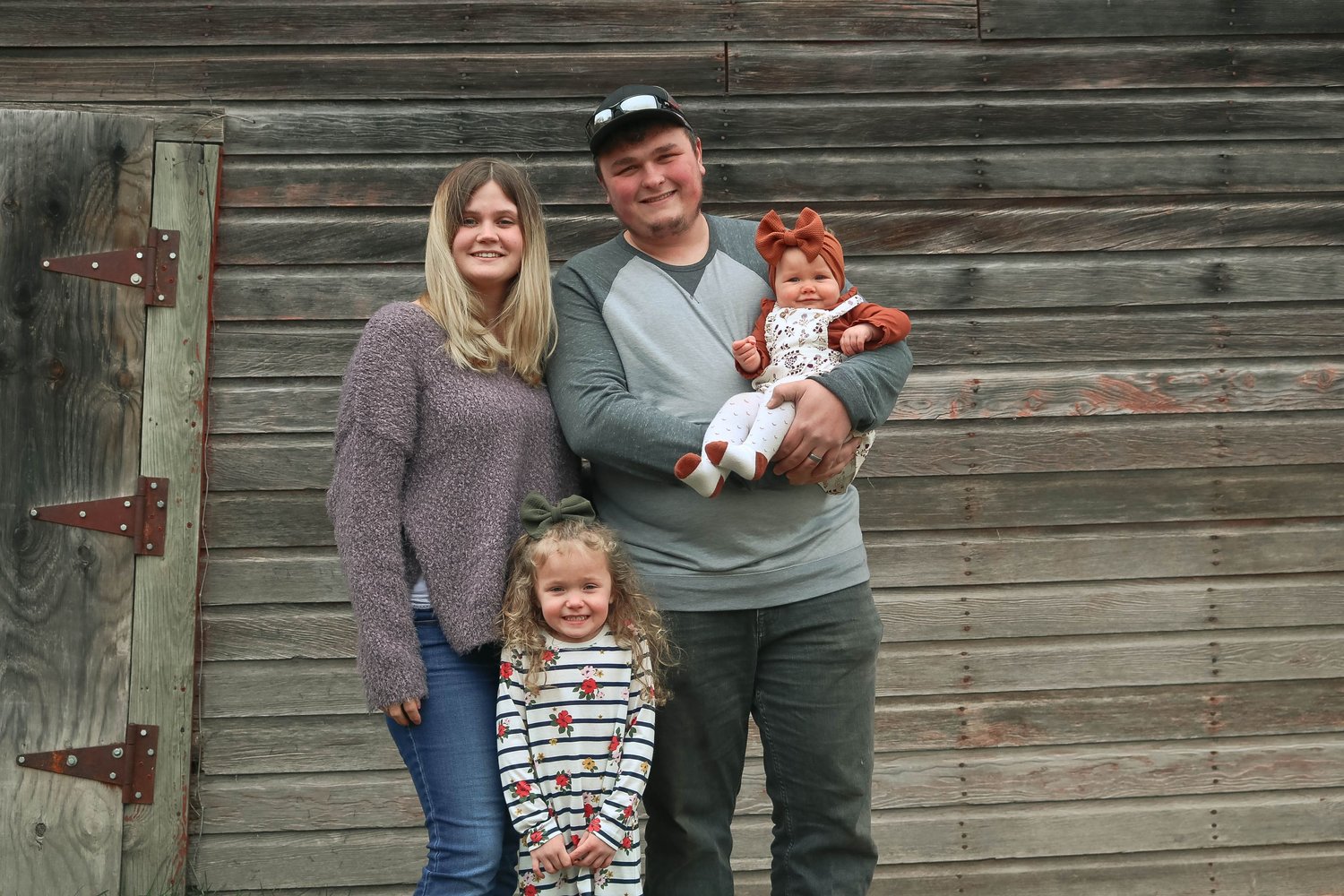 Cameron Hazzard is pictured with his fiancé, Makayla, and their daughters Zyla, 1, and Zara, 5. Hazzard is recovering from an Oct. 3 accident on I-94, when a van traveling the wrong way caused an accident that rolled his truck, shattering his hip.
Contributed photo
Posted Monday, October 18, 2021 11:58 am
By PAT MULVANEY, Herald Editor

The young father of two, who graduated from Maple Lake High School in 2015, encountered a van traveling the wrong way in the eastbound lane, causing a collision that put his life into a tailspin.

The oncoming van triggered a four-vehicle accident that killed an Indiana man and injured several others. Hazzard’s truck ended up upside down in a ditch where he was left hanging from his seatbelt, disoriented and scared.

He grabbed his traveling companion, Luna, a small Chihuahua, and he crawled to safety the best he could not knowing that he had a shattered hip. Once he was a safe distance from his vehicle, he laid in the ditch and waved his phone in the air for almost 15 minutes before someone came to his aid.

Paramedics took him to the hospital in Tomah. He was transferred to the Mayo Clinic in Rochester where he received specialized care for his condition.

Doctors set his hip back into its socket before scanning his pelvis to determine the best course of action. They determined he was in need of major surgery to remove bone fragments and repair what was left of his hip socket.

It took the surgeon nearly eight hours to complete the procedure. Hazzard won’t be able to walk for at least three months and surgeons are unsure if a full recovery is possible. The hospital released him on Oct. 8.

So far, his recovery has been difficult on his family, which includes his fiancé Makayla, who is now caring for him full time. She said every day activities are almost impossible.

Hazzard says that something as simple as using the bathroom has become an exhausting task. He said it’s also tough on his daughter since roughhousing with dad just isn't an option anymore.

Hazzard was the sole provider for his family, and with the loss of his commercial truck, trailer, and his physical health, the Hazzard family is going to need all the help they can get while he focuses on his recovery.

His friends and family are asking for people to help contributing to this fundraiser at gofundme.com/f/help-cameron-hazzard-walk-again.

Carrie Jean Herbst is facing nearly 100 years in prison for the accident that left one man dead and two others seriously injured.

A witness told police he was traveling east on I-94 at 8:50 p.m. and was following a white van he said was having a hard time maintaining its lane. He reported following the van down the exit at Three Bears Lodge and watching it do a U turn, head back up the exit ramp and continue west in the eastbound lane before hearing a loud crash.

Investigators said the van, later determined to be operated by Herbst, who was the vehicle’s sole occupant, had travelled approximately one mile the wrong way before striking a vehicle head on, which precipitated the other collisions.

One of the first officers on the scene reported finding four damaged vehicles, including a white van, a Mini Cooper, a Chevy Equinox and Hazzard’s truck and trailer.

The occupants of the Mini Cooper included Khan Ghiyasuddin, 29, of Indianapolis, who was transported to a La Crosse hospital where he later died, and a 16-year-old passenger whose condition was not included in the complaint.

Emergency personnel had to extricate Herbst from her van where an officer said he observed a bottle of Mike’s Hard Lemonade in the driver’s seat. She was transported to the Black River Falls hospital where a blood sample was taken. Police charged Herbst with operating while intoxicated before being flown to a Madison hospital for treatment of her injuries.