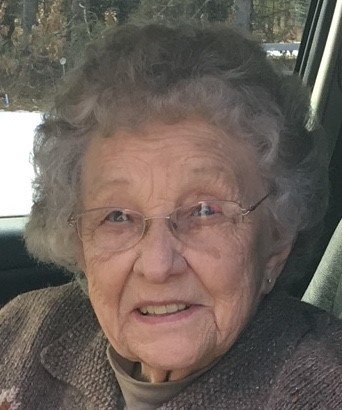 Catherine (friends called her “Muff” or “Muffy”—a nickname she got as a baby) was united in marriage to Wayne Neustadter on August 14, 1947 in Sparta, WI. Wayne and Catherine became parents to two children, Diane and Gary. They lived on the family mink ranch in the Town of Cutler. Wayne died in 1967 from a sudden heart attack. The mink were sold and Catherine began employment at the Tomah Veterans Hospital in Tomah, WI where she worked in the supply department with her best friend Jean Wischow until retirement.

She was a skilled seamstress who was always willing to help a neighbor from a basic hem to a complete outfit (from scratch). “Grandma” enjoyed visiting with her three grandchildren as much as possible, attending their musical performances, school activities, and special vacations through the years. She enjoyed a good conversation with anyone who stopped by, hardly ever missed a funeral, loved to attend weddings, and was always eager to hear a good joke. She even took up deer hunting after Wayne passed and was VERY successful for many years.

Catherine was a faithful member of the Bethel Baptist Church and enjoyed the weekly Sunday dinners with the Georgeson family after church. She loved to sit on her front porch and watch the birds and deer. She did not like the squirrels or raccoons!

In remembrance of Catherine Neustadter’s life, the family asks that any charitable donations be made to “Bethel Baptist Church.”

Online condolences may be sent to www.sonnenburgfamilfh.com