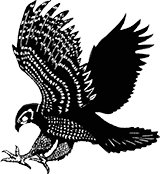 The Brookwood boys’ basketball team is turning its attention to the postseason after missing out on the chance for a regular-season sweep.

New Lisbon built up a 38-24 halftime lead and the Falcons were unable to come back despite holding a 39-36 scoring edge in the second half.

Junior guards Ashton Pfaff and Keagan Shankle led the way for the Rockets in the win by posting 26 and 21 points, respectively.

As for Brookwood, sophomore guard Brady Hansen and senior guard Austin Frye each scored 17 points while senior guard Franklin Wildes tacked on 11 points of his own.

The Falcons aren’t back in action again until they face Coulee Christian/Providence (7-11) — who they recently beat 65-54 on February 18 — in the Division 5 regional quarterfinals Tuesday, March 1 at 7 p.m. in West Salem.