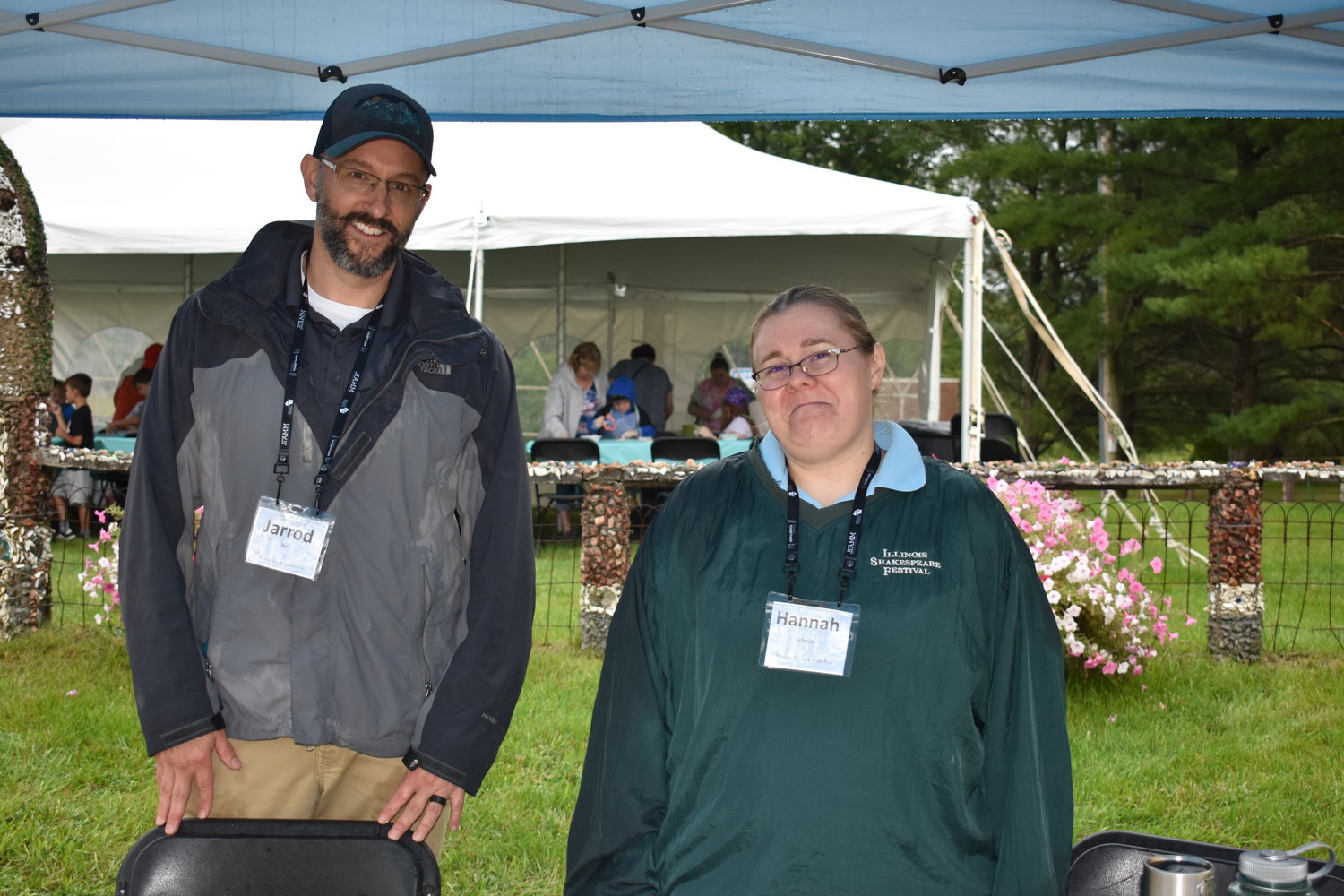 Jarrod Roll and Hannah Scholze stand at the event entrance, greeting newcomers and thanking those who had finished thier projects.
Herald photo by Benny Mailman 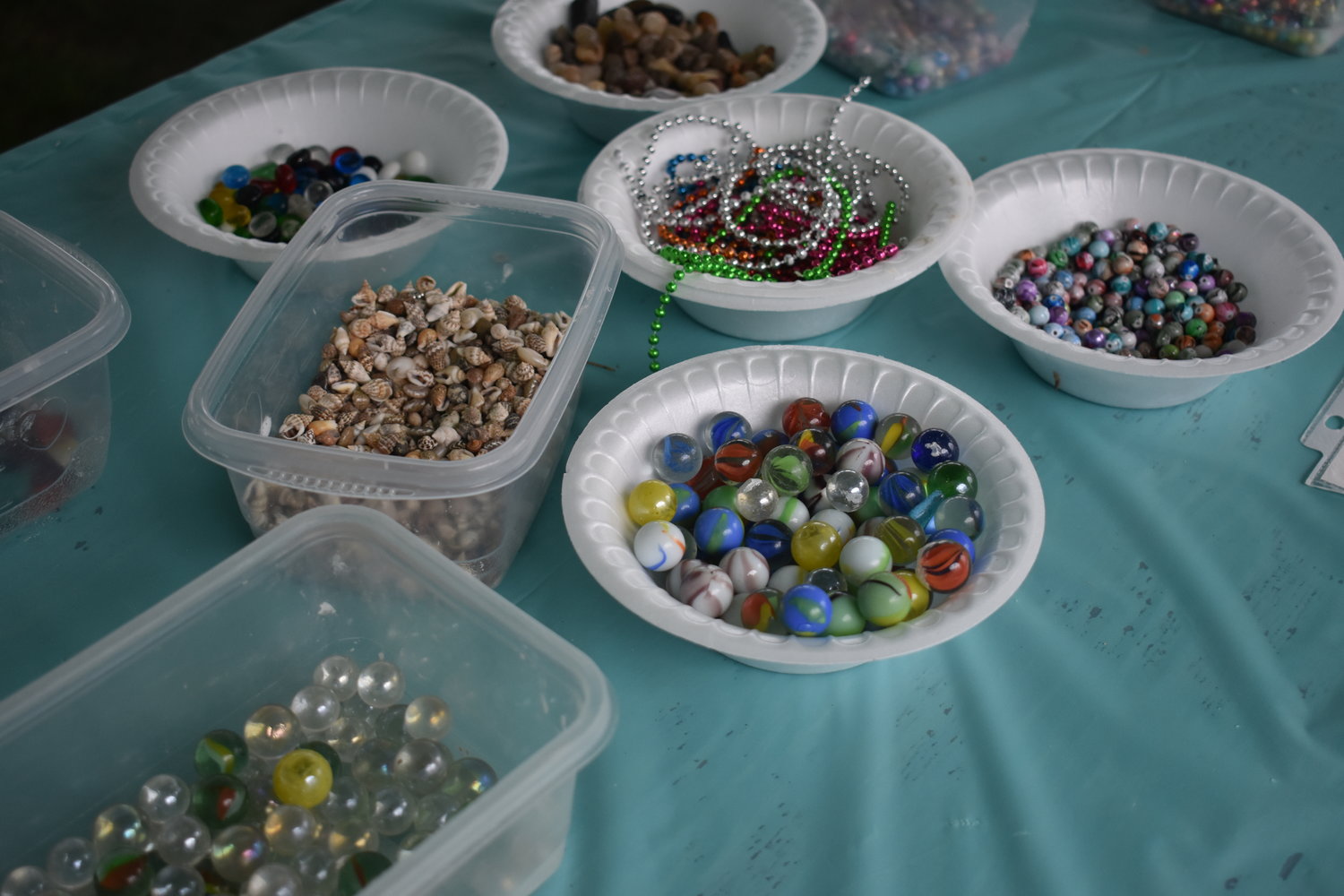 colorful beads were available in many shapes and sizes for the artisits to find exactly what they wanted.
Benny Mailman 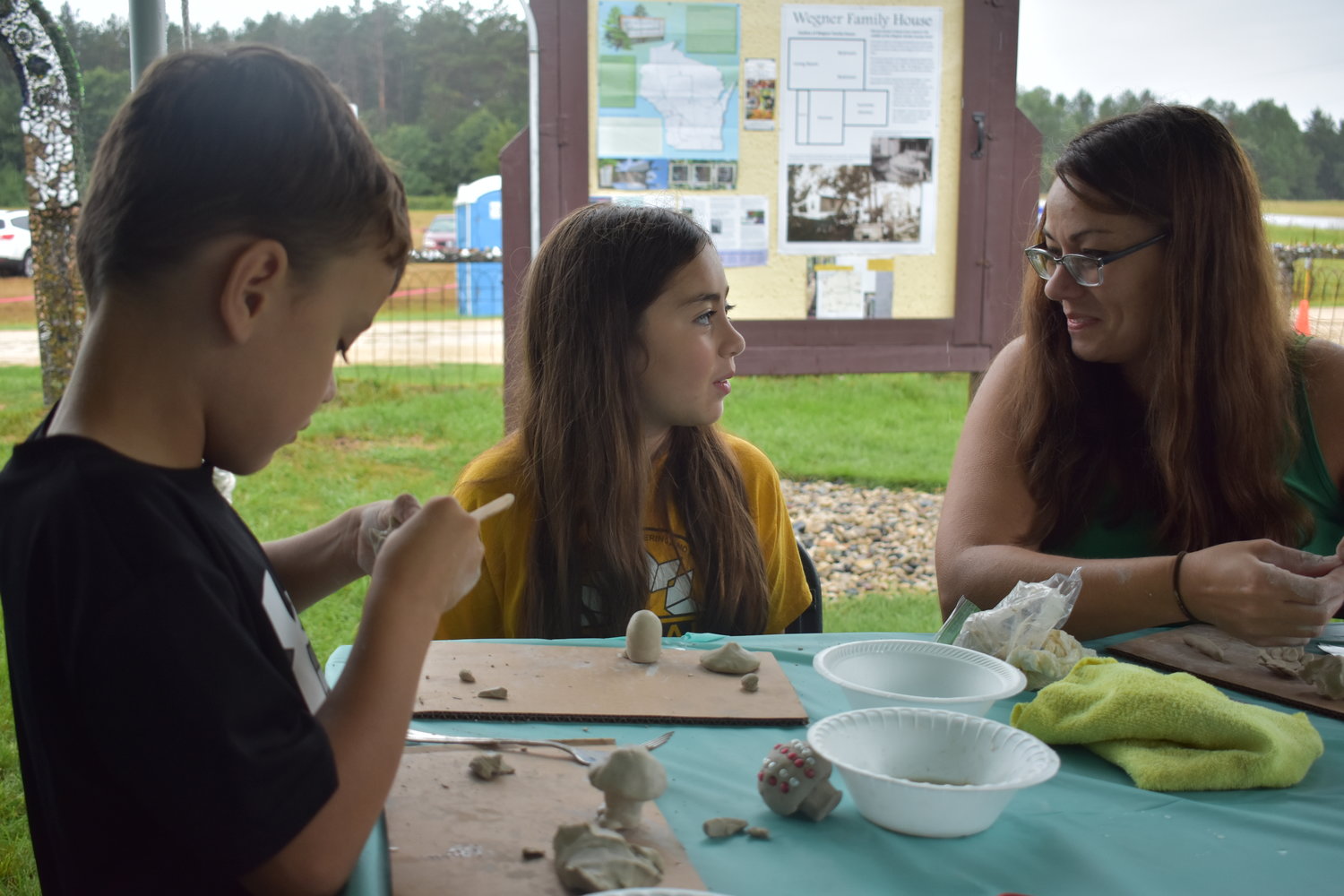 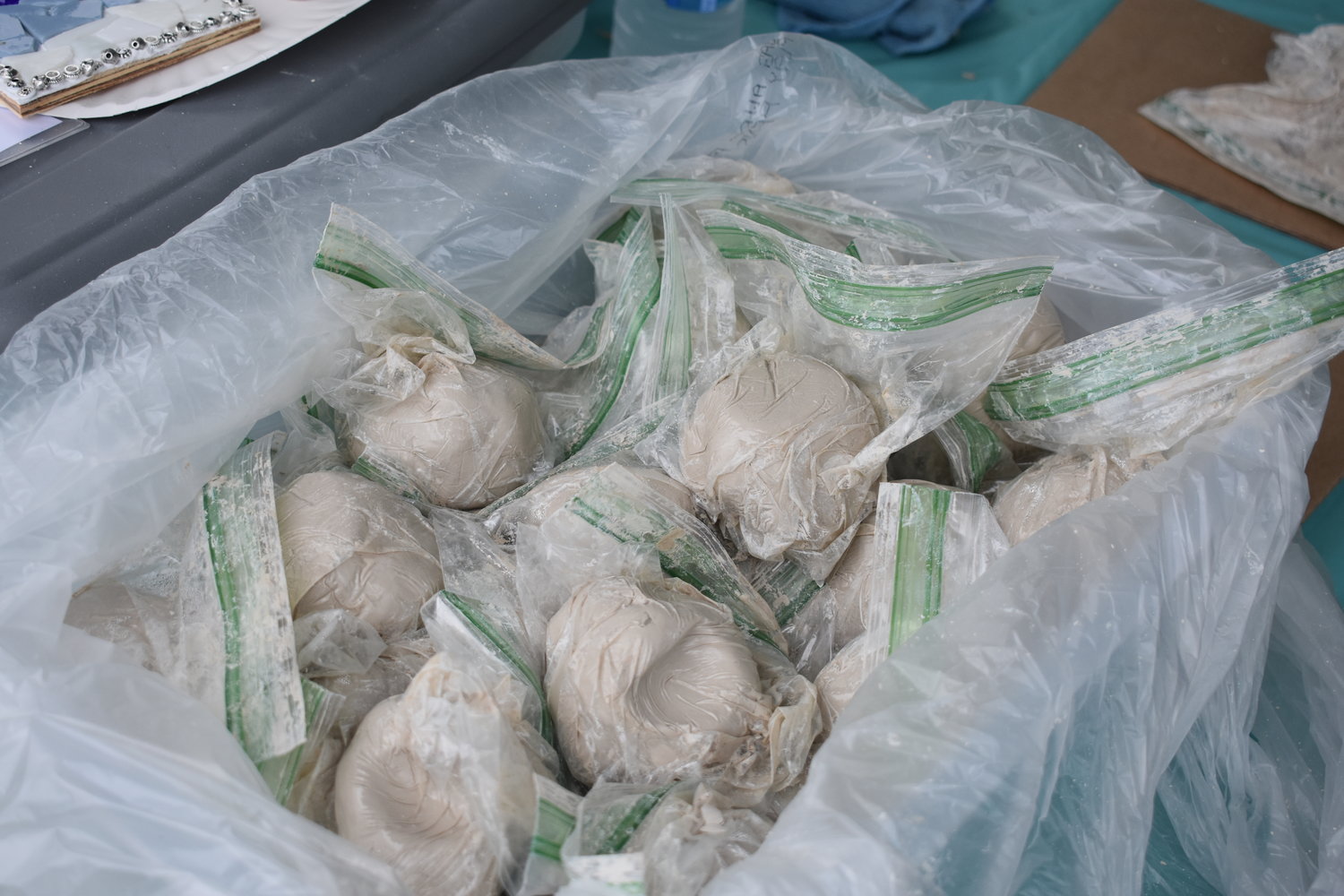 Balls of clay awaiting to be shaped and formed according to the artists vision.
Benny Mailman 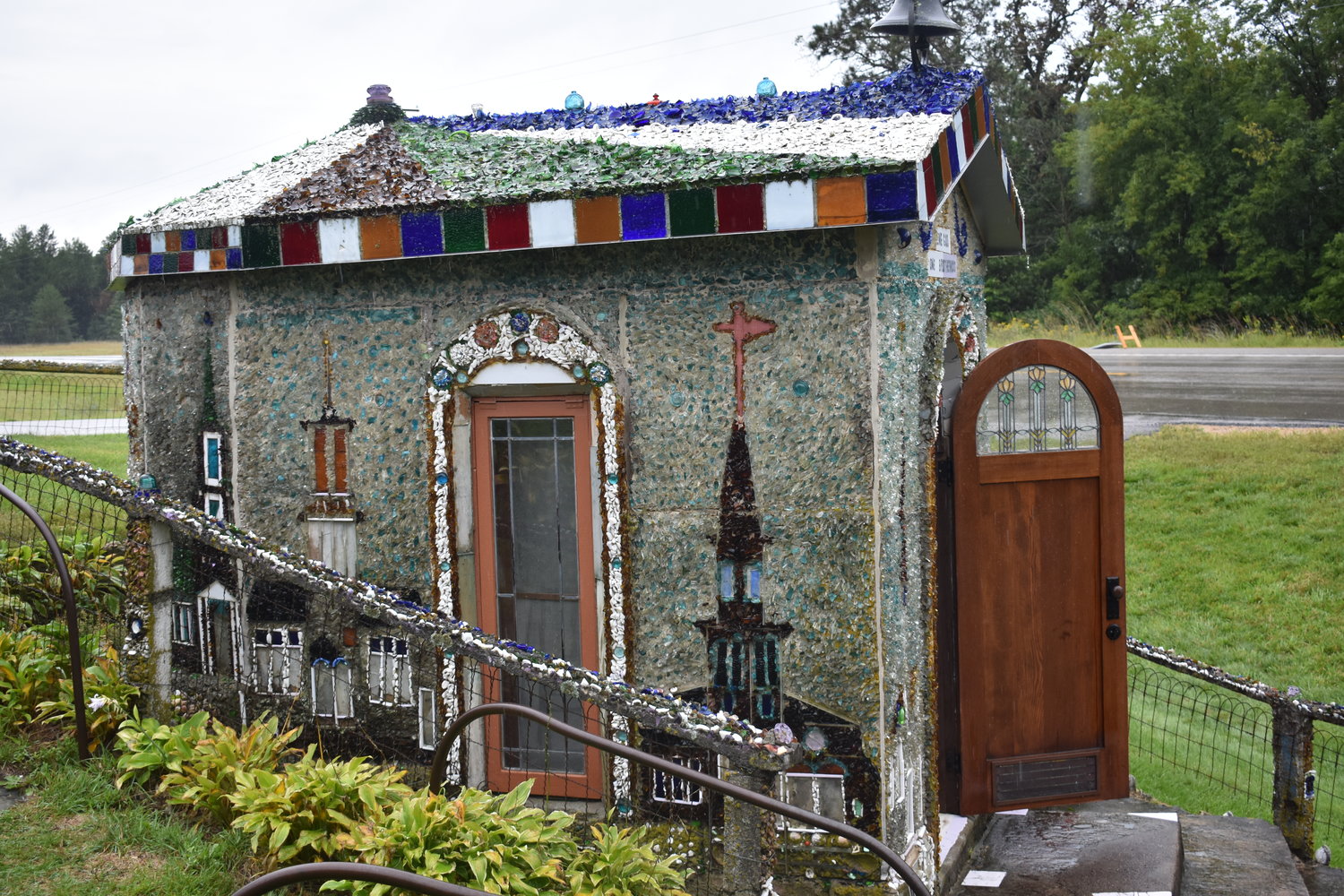 The most viewed structure at the Grotto, the glass church. As you can see, the door is open today.
Benny Mailman 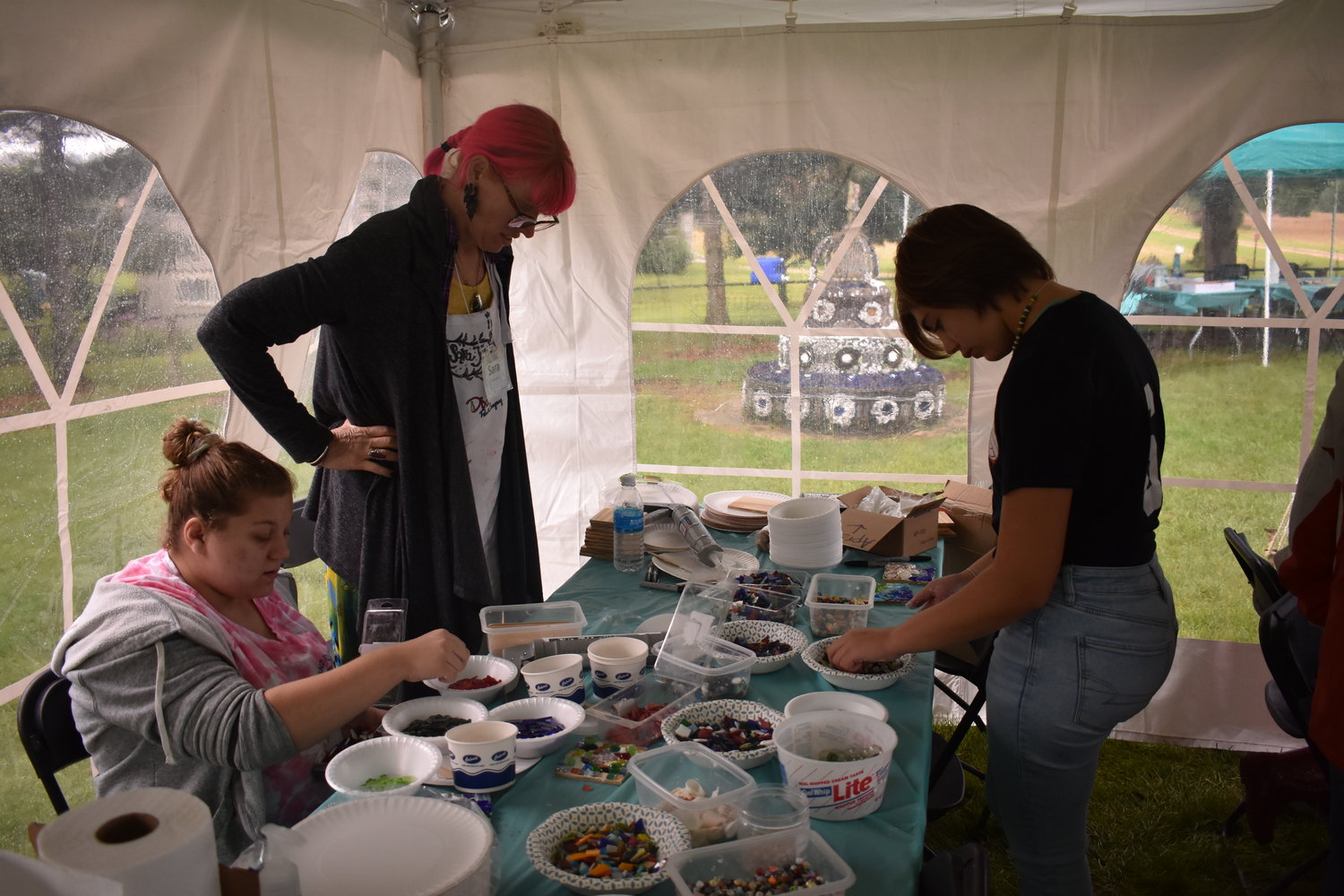 Sara Whitewater helps out with the mosaic area of the art fest. She is a volunteer and takes care of the plants, ensuring that beauty remains a prominent feature of the Grotto.
Benny Mailman 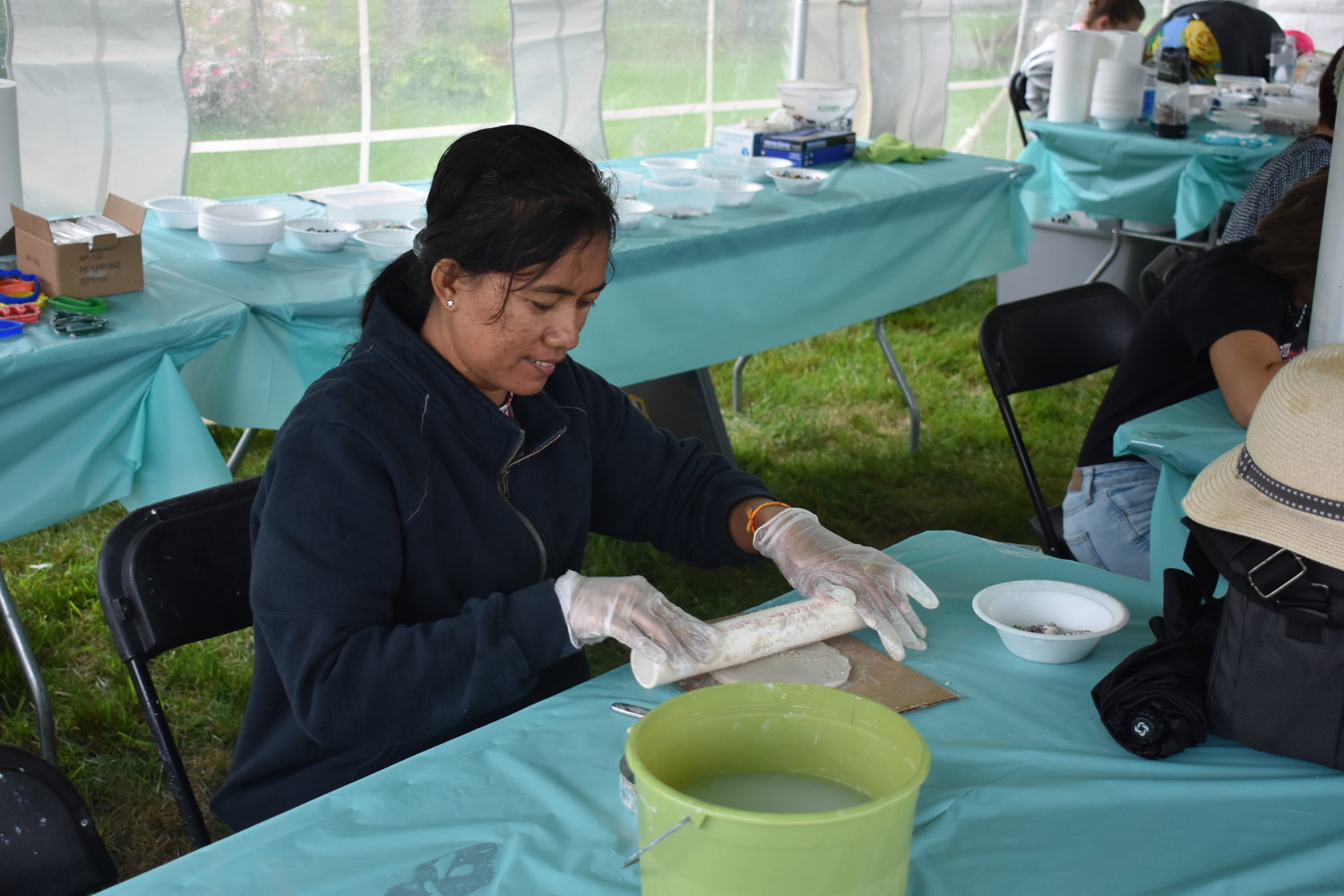 Vicheka Oum, from Siem Reap, Cambodia, creates sea shell art in the clay that was provided by the Art Outdoors event.
Benny Mailman 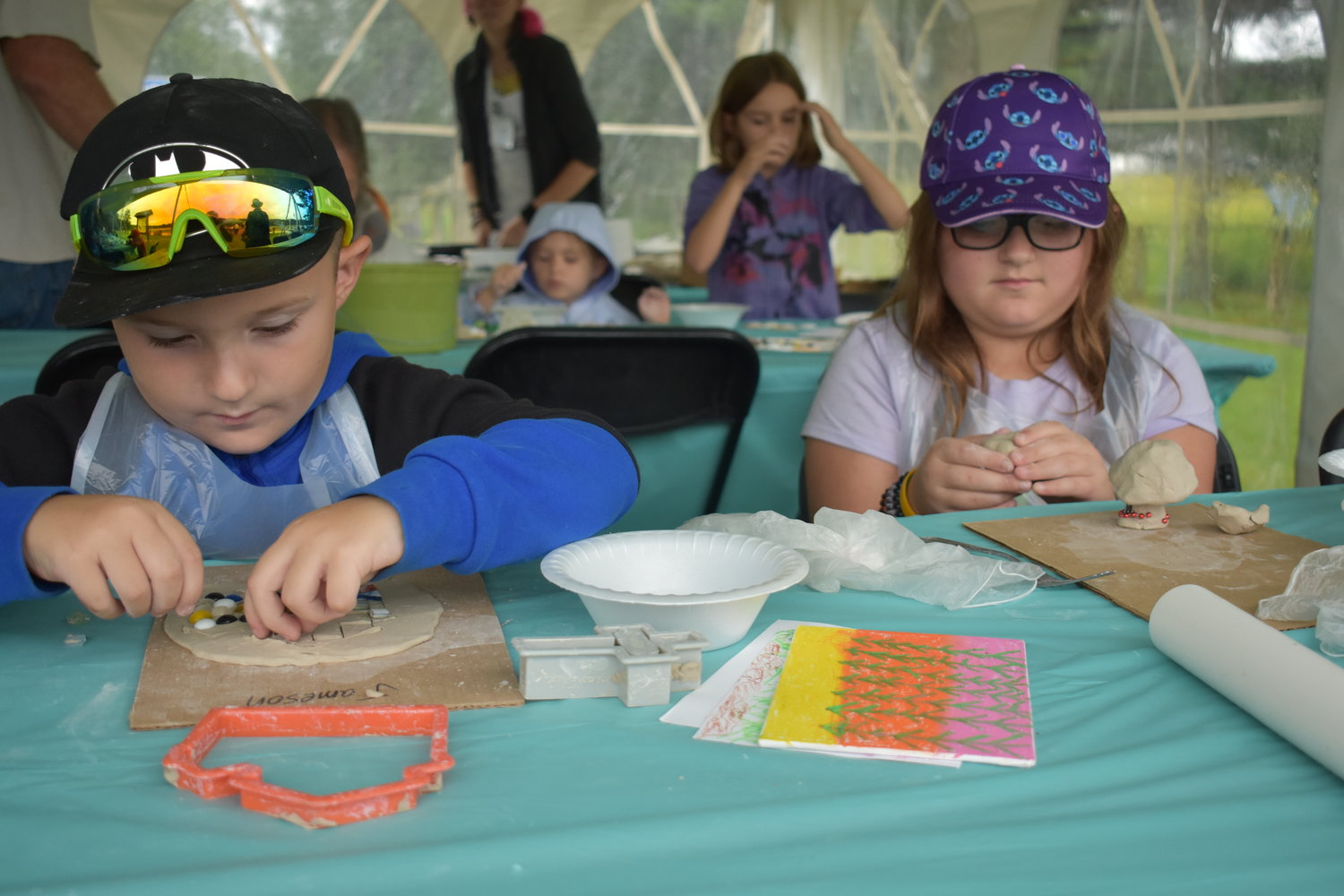 On Saturday August 27, Art Outdoors was hosted by the Monroe County Local History Room and Museum. The location for the creative event was at the Wegner Grotto County Park, just fifteen minutes north of Sparta, and just shy of Cataract. Although the official address puts the Grotto on Daylight road, the gloomy weather made it seem more like an ominous dusk. Despite the nastiness of mother nature, eager artists that numbered fifty strong, showed up within the first hour of operations.

Jarrod Roll and Hannah Scholze greeted attendees from under a small pop-up tent, that was mostly dry. Roll informed new comers that the art they would be creating today was inspired by the Grotto itself. A perusal of the area, by the most novice detectives, would indicate that pieces of glass, ceramics, tile and even marbles may be part of their art. Plaster or cement would most likely be the material that bonded all the art items together.

One option was a small ball of clay, about the size of a tangerine. One could lay the clay flat or make a three dimensional object from the moldable units. Artist Cindy Liebl was the sometimes coach and sometimes demonstrator for this activity. It was popular amongst the participants and could be seen at every active station.

New to the Art Outdoors event was the pastel painting, as well as the instructor, Crystal Bauer. Crystal is an art teacher at Herrman Elemetary School and was on hand to teach and guide all the artists, old and young. Bauer’s favorite type of art is drawing, which is why she loves the pastel crayons. “You can draw with the crayons, but it resembles painting because of the oily texture. The colors blend well and smoothing them together is easy,” Bauer said. Smoothing is the motion of pressing a finger or thumb on the colors and slightly squishing them together. Bauer was filling in for a friend who could not make the event. “ A friend of mine asked if I would fill in for her at the event and I jumped at the opportunity.”

Sara Whitewater was in charge of the mosaic artists, helping them to pick out materials and also guide them on their venture into mosaic creation and design. Whitewater has been a volunteer plant caretaker of the Grotto for roughly seven years. For Whitewater, it is the artistic voice that the Grotto speaks to her with that draws her into  to her “Labor of Love,” for the grounds. “This (Wegner’s Grotto) is a piece of art that they [Paul and Matilda Wegner, and Charlie(their son)] worked painstakingly hard at for so many years. I feel that I must do my best and my part to keep it strong and push towards another ninety years. Eventually we will pass the torch to others, and this beautiful dream can stay alive.” Whitewater also stated that she hopes the state will step in at some point and give stronger protection to the county park.

Jarrod Roll stated that even the parents and grandparents that brought the youngsters, to test their artistic abilities, usually joined in themselves on the art action. “We encourage everyone to partake in the creativity and we see a majority of the adults join in with their kids and grandchildren … they are already here, so why not?,” Roll said.

Roll also mentioned that the little church in the Grotto was actually open that day. “Usually it is locked, because although this is a county park, there is not enough money for a fulltime attendant,” he said. “Even the art supplies and tents are from a grant that we get. The county pays for the electric, grass mowing and the porta-potty for five months.” Roll was also excited that another grant has allowed them to put in a “Trail people counter,” that will keep track of visitors to the Grotto year around. Roll stated that the information gathered will be very beneficial in helping to attain other grants.

Jennifer Frazier was smiling as she watched her children: Ethan (7 ½) and Lilly (10) mold the clay into different shapes and objects. “ We do not live here now, but I grew up just a bit down this road. I love having this connection and watching my son and daughter enjoy this area,” Frazier said.

Next to the Fraziers, was young Atticus Haralson (4) and his grandmother, Sara Hendricks. They were working on a mosaic together, and Atticus had a blast placing all the different colored pieces into the plaster.

Jameson (6) and Ariel Newman (9), of Sparta, were busy also. Jameson had a clay church (flat) that was decorated in bright beads, shiny marbles and colorful glass. Ariel had a stunning mushroom that would adorn a special space in her home, and her families hearts.

Over at the pastel table, under the tutelage of Crystal Bauer, Kai (11) and Tobias (3) Jacobson, of Cataract, were drawing and smoothing some nice pastel drawings. Amelia Schaitel, (4), also from Cataract, had drawn a beautiful butterfly.

The Wegner Grotto is inching its way towards the hundred year mark. Paul and Matilda Wegner made a wonderful footprint, so many years ago. Paul’s funeral was actually held in the glass church there, the most visible art building from the road. The creative energies of the Grotto continue to blow through the statues and structures, thanks to Monroe County, and the amazing volunteers, like Jarrod Roll, Hannah Scholze, Sara Whitewater, Cindy Liebl and Crystal Bauer. The spirit of Wegner’s Grotto is very much alive and running strong on dedication, effort and love for community creativity.